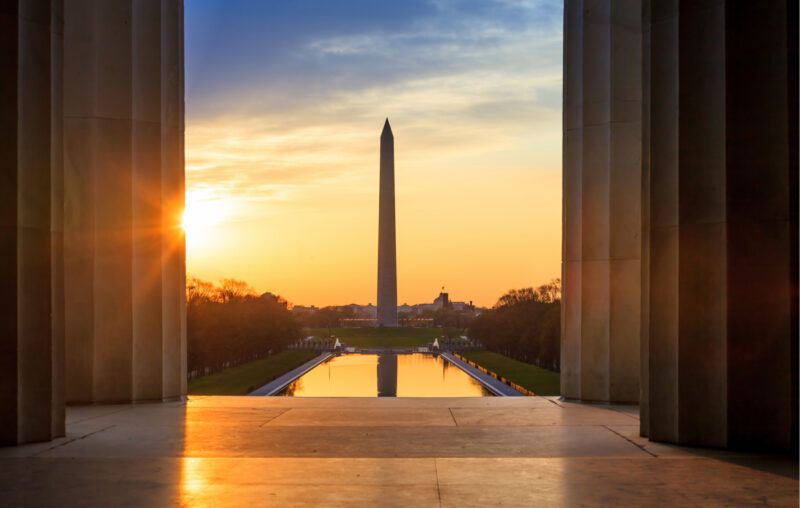 Contemporary divisions on the American right are an acute reminder that some of the United States’ most difficult debates have historically revolved around political economy. From the fierce arguments between Alexander Hamilton and Thomas Jefferson about the constitutionality of a national bank, to the sharp discussions over the New Deal, these disputes get so intense because the participants know that more than economic policy is in play.

The right’s present economic disagreements go beyond the technical merits of free trade versus protectionism, or of markets versus industrial policy. They also raise another issue: whether or not America’s economic future will be consistent with the Founding’s vision and principles, as expressed in the U.S. Constitution, the Federalist Papers, George Washington’s Farewell Address, and similar texts.

Historically speaking, modern American conservatism has been strongly informed by and committed to the American Founding. And this Founding did not try to set in motion a corporate state, economic autarky, or something similar to Chinese neo-mercantilism—all of which have found sympathizers among contemporary conservatives. Instead, it sought to realize a republic that, unlike any other, integrated the virtues and institutions of commerce with those of other parts of life.

An Ancient and Modern Debate

In the American Revolution’s wake, citizens with rival economic interests envisioned quite disparate futures for their new country’s economy. Different economic groups and regions were naturally in competition. Contending political ideas, however, were also at work.

Jefferson, for example, preferred an America populated by rural proprietors. He and others were inspired by the Roman republic’s belief in the supposedly degenerative cultural effects of urban commerce, wealth, and finance. They read books like Cato the Elder’s De agri cultura, which portrayed commerce and banking as not only excessively risky, but essentially dishonorable. Cato and other Romans preferred to wax lyrical about the virtues associated with agricultural life.

Against such outlooks were ranged individuals like Hamilton. He appreciated Roman and Greek sources just as much as your average Virginia planter, but he had little patience with rural romanticism. According to Hamilton, the United States’ future success depended heavily on economic modernization, the development of a dynamic financial sector, and the extensive pursuit of internal and foreign trade. He also held that it was better to work with people’s economic self-interest than to resist it.

The underlying vision that won out, at least in pivotal founding documents, was that of America as “a great, a respectable & a commercial nation,” as George Washington described it in a 1788 letter. The Federalist also reflects this position: not only does it defend the Constitution and explain how the new federal government would function, it also amounts to a brief for a commercial republic that would serve America well in economic and more than economic ways.

In the eighteenth century, the significance of commerce took on a major role in political thought, thanks in particular to the influence of the French jurist and philosopher Charles de Montesquieu. Britain’s distinctiveness, Montesquieu wrote in his Spirit of Laws, lay in the fact that “the English . . . have ever made their political interests give way to those of commerce.” Modern commercial republics, from his standpoint, were polities in which the economy, laws, and government worked together to allow individuals to pursue various commercially oriented goals.

That much of this perspective permeates the Federalist is, I think, an uncontroversial claim. In Federalist 12, Hamilton observed that “The prosperity of commerce is now perceived and acknowledged by all enlightened statesmen to be the most useful as well as the most productive source of national wealth, and has accordingly become a primary object of their political cares.” Madison goes so far as to say in Federalist 10 that the federal government would discover that issues of justice surrounding commerce were to be the “principal task of modern legislation.” Hamilton is careful to specify that this economy will embrace more than simply merchants. Those directly involved in agriculture would be thoroughly integrated into a modernizing American economy, thereby settling the “often-agitated question between agriculture and commerce.”

What’s curious about the Federalist’s treatment of these questions is that there is no particular concern that the growth of commerce and a capital-intensive economy might foster the social pathologies that many associated with the pursuit of wealth. On the contrary, the Federalist maintains that the free development of financial, agricultural, industrial, and commercial interests is, as Madison stated, the natural product of “civilized nations.” For Hamilton, it was the “unequaled spirit of enterprise, which signalizes the genius of the American merchants and navigators, and which is in itself an inexhaustible mine of national wealth,” that had the potential to make America “the admiration and envy of the world.”

Such esteem would extend to more than economic achievements. The habits associated with successful commercial enterprises such as inventiveness, industriousness, self-discipline, and self-denial could not be limited to economic life. They would spill over into society’s political, legal, civil, artistic, and military realms, thus helping America to become what Federalist 1 envisaged as “an empire in many respects the most interesting in the world.” To this extent, the Federalist regards entrepreneurship, trade, and economic modernization as crucial prerequisites for realizing distinctively non-economic goods, like the greater unity, justice, domestic tranquility, common defense, and general welfare identified in the Constitution’s preamble.

This, however, is not the end of the story. Key Founders celebrated the moral, political, and economic habits and institutions that characterized commercial nations; but they also assumed that the commercial republic arising in America would be grounded on moral and political premises that arose from society’s non-economic spheres.

One text that succinctly expresses this conviction is Washington’s 1796 Farewell Address. Like all such documents, it needs to be read in light of the particular controversies of the time, such as America’s then difficult relationships with Britain and France. That said, the text expounds a distinct vision of a commercial republic in which the word “republic” conveys much more than commitment to a non-monarchical regime.

The view of commerce articulated by Washington (in the address’s lengthy list of recommendations to the United States) is overwhelmingly positive. He presents “unrestrained” trade between America’s East, South, North, and West as binding the country together, as each region capitalizes on its comparative advantages to meet the others’ economic needs. This in turn brings to Americans “greater strength, greater resource, proportionately greater security from external danger, [and] a less frequent interruption of their Peace by foreign Nations.”

Looking beyond America’s frontiers, Washington recommends “liberal intercourse with all Nations” and the pursuit of a “Commercial policy” that does not involve “seeking or granting exclusive favors or preferences.” Rather, government should allow commerce to follow “the natural course of things; diffusing and diversifying by natural means the streams of Commerce, but forcing nothing.” The overall picture is one in which America allows its citizens to trade as they see fit. Meanwhile government officials should focus on ensuring that all the conventional rules of international commerce be upheld as far as possible, without forgetting that it is folly to imagine that other countries will not act in their own interest.

Washington’s confidence in the benefits of wide-ranging domestic and international commerce wasn’t without qualifications. In private, he occasionally worried about trade’s effects on public morals. In 1784, Washington referred in a letter to Jefferson to “those vices which luxury, the consequence of wealth and power, naturally introduce[s].” The weight of such concerns, however, should not be exaggerated. Later that same year, while corresponding with Benjamin Harrison, Washington stated that, “A people . . . who are possessed of the spirit of Commerce—who see, & who will pursue their advantages, may achieve almost anything.”

The ultimate remedy for the challenges arising from vibrant commercial orders was not, from Washington’s perspective, something akin to today’s administrative state. Washington’s Farewell Address affirmed his belief in “a Government of as much vigor as is consistent with the perfect security of Liberty.” But he primarily emphasized “Religion and morality” as the “indispensable supports,” as he called them, of “political prosperity.”

Washington certainly described “Institutions for the general diffusion of knowledge” and “refined education” as important in realizing that objective. That reflects a mind shaped by Anglo-American Enlightenment thought. But Washington did not think that a republic in which commerce played such a prominent role could dispense with beliefs inspired by the Hebrew and Christian Scriptures—or with the concern for natural rights and natural law that were part and parcel of eighteenth-century American political and legal discourse. They were, to Washington’s mind, essential for “private and public felicity.”

This conception of America as a commercial nation contrasts somewhat with Montesquieu’s understanding of modern commercial republics. Montesquieu’s Spirit of Laws praised Britain for knowing “better than any other people upon earth how to value, at the same time, these three great advantages—religion, commerce, and liberty.” Yet he insisted that the basis of “the laws of morality” in commercially focused societies was self-interest. What prevents such societies from disintegrating, Montesquieu argued, was that people’s tendency to pursue their self-interest is tempered by that same self-interest. “Happy it is for men,” he commented, “that they are in a situation where, though their passions prompt them to be wicked, it is, nevertheless, to their interest to be humane and virtuous.”

The commercial republic envisaged by key Founders takes the workings of self-interest for granted, even as beneficial. But the same Founders are far more explicit than Montesquieu about just how much such polities need other reference points to survive and prosper. Hence, although they attached a high premium to commercial success and exhibited tremendous confidence in economic freedom’s benefits, they also stressed the necessity of cultural and moral resources that motivate people to think directly about the well-being of their fellow citizens and the republic as a whole.

Twenty-first-century American economic life, profoundly shaped as it is by the legacies of the New Deal and the Great Society, as well as by a faith in experts and technocracy that persists on the left and right, is far removed from the spirit that animated the idea of America as a commercial republic. But so too are many of the proposals of those conservatives who take inspiration from traditions ranging from European corporatism to Asian industrial policy. They put far more faith in top-down state coordination, intervention, and technocrats than did Founders like Washington and Hamilton, who by no means believed in emasculated government.

To this extent, today’s intra-conservative economic debates ask us to consider if the Founding will remain an indispensable starting-point for American conservatives, whether the topic be constitutionalism, foreign policy, or political economy. Or is it to be tokenized, even relegated to obscurity by other conservative traditions whose leading protagonists weren’t noted for their affection for America or its experiment in ordered liberty? In that respect, the significance of the economic fight on the right goes far beyond the world of supply and demand. It provides us with glimpses into very different possibilities for conservative thought and politics in America.

Reprinted from the Witherspoon Institute

This article, Founding Economics and American Conservatism’s Future, was originally published by the American Institute for Economic Research and appears here with permission. Please support their efforts.