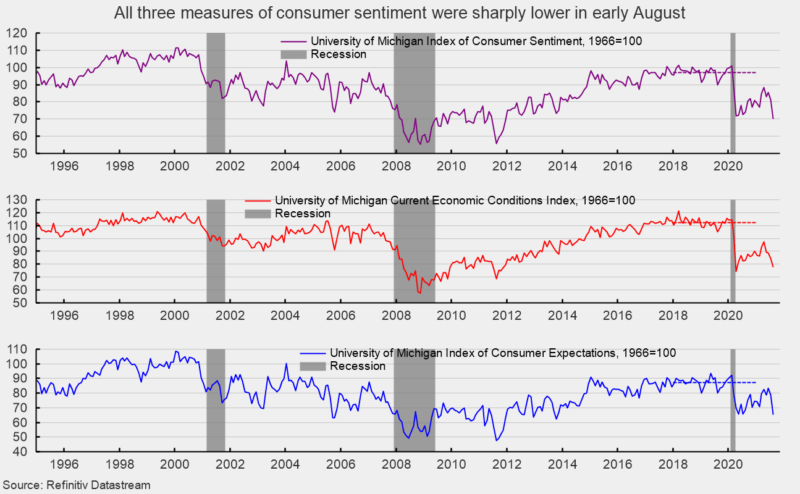 The preliminary August results from the University of Michigan Surveys of Consumers show overall consumer sentiment plunged in early August, hitting the lowest level since December 2011. Fears of the Delta variant and rising number of new Covid cases were the primary drivers.

According to the report, “Consumers reported a stunning loss of confidence in the first half of August. The Consumer Sentiment Index fell by 13.5% from July, to a level that was just below the April 2020 low of 71.8. Over the past half century, the Sentiment Index has only recorded larger losses in six other surveys, all connected to sudden negative changes in the economy: the only larger declines in the Sentiment Index occurred during the economy’s shutdown in April 2020 (-19.4%) and at the depths of the Great Recession in October 2008 (-18.1%).”

The report goes on to add, “The losses in early August were widespread across income, age, and education subgroups and observed across all regions. Moreover, the losses covered all aspects of the economy, from personal finances to prospects for the economy, including inflation and unemployment.”

With regard to the economic outlook, the report adds, “There is little doubt that the pandemic’s resurgence due to the Delta variant has been met with a mixture of reason and emotion. Consumers have correctly reasoned that the economy’s performance will be diminished over the next several months, but the extraordinary surge in negative economic assessments also reflects an emotional response, mainly from dashed hopes that the pandemic would soon end. In the months ahead, it is likely that consumers will again voice more reasonable expectations, and with control of the Delta variant, shift toward outright optimism.”

Overall consumer sentiment decreased to 70.2 in early August, down from 81.2 in July (see top of first chart), a 13.5 percent drop (see top of second chart). From a year ago, the index is down 5.3 percent.

The current-economic-conditions index sank to 77.9 from 84.5 in July (see middle of first chart). That is a 7.8 percent decline (see middle of second chart) and leaves the index with a 6.0 percent decrease from August 2020. The second sub-index — that of consumer expectations, one of the AIER leading indicators — plunged 13.8 points or 17.5 percent for the month (see bottom of second chart) to 65.2 (see bottom of first chart), the lowest since October 2013.

The shocking decline in consumer sentiment in early August reflects the emotional sensitivity of the population to the spread of the Delta variant and sharp rise in new Covid cases. Emotions do play a role in consumer behavior and therefore consumer spending. Some of the reaction may reverse as the number of new cases peak, but the survey results add to the growing list of risks to the economic outlook.

This article, Fears of Delta Variant Send Consumer Sentiment Plunging in Early August, was originally published by the American Institute for Economic Research and appears here with permission. Please support their efforts.