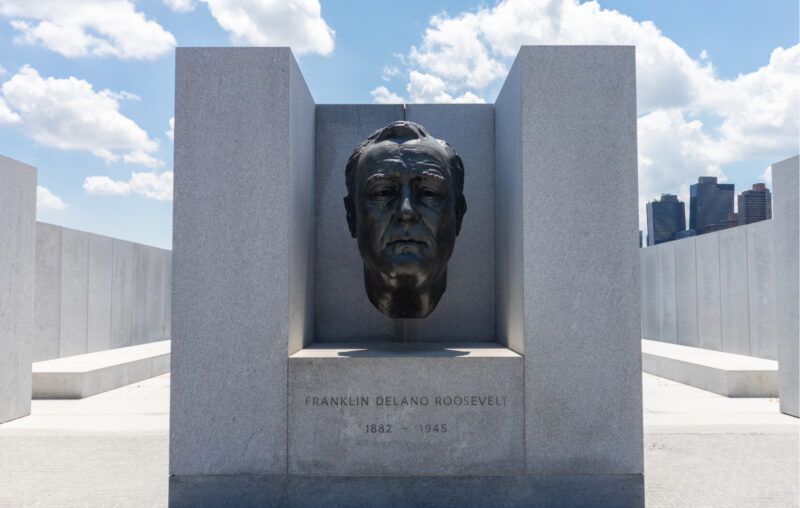 Adam Smith helped to christen the first political meaning of “liberal,” essentially, a presumption in favor of “allowing every man to pursue his own interest his own way.” That meaning of “liberal” remained central in Britain up to 1880.

After 1880, “liberal” started to grow a new and quite contrary meaning, essentially, favor for the governmentalization of social affairs. The character of the Liberal Party in Britain changed.

During the 1920s, displaced by the Labour Party, the Liberal Party went into decline. But the semantic changes infected the United States, where the new meaning found its epochal influence. Franklin Roosevelt worked to entrench the new meaning. Today, many people remain stuck in those trenches.

In a chapter called “The Political Vocabulary of Franklin Roosevelt,” David Green (1987) treats the matter. I assemble quotations from the section “The transformation of the liberal label.” It opens with a quotation from Roosevelt:

Generally speaking, in a representative form of government there are usually two general schools of political belief—liberal and conservative…The liberal party is a party which believes that, as new conditions and problems arise beyond the power of men and women to meet as individuals, it becomes the duty of the Government itself to find new remedies with which to meet them…
The conservative party in government honestly and conscientiously believes the contrary. It believes that there is no necessity for the Government to step in, even when new conditions and new problems arise. It believes that, in the long run, individual initiative and private philanthropy can take care of all situations…
The clear and undisputed fact is that in these later years, at least since 1932, the Democratic party has been the liberal party, and the Republican party has been the conservative party.

The remainder of my article consists mainly of words from Green. And Green quotes Roosevelt, John T. Flynn, Robert A. Taft, and Herbert Hoover. The title of the 1987 Cornell University Press book is: The Language of Politics in America: Shaping Political Consciousness from McKinley to Reagan.

In distinguishing between liberals and conservatives, [Roosevelt] emphasized that liberals ‘believed in the wisdom and efficacy of the will of the great majority of the people, as distinguished from the judgment of a small minority of either education or wealth.’ … Liberalism was not the politics of coercively imposed generosity but of democratically ordained generosity. (121-22)

A major attraction of the liberal label was its setting up a ready-made useful enemy. With Roosevelt identified as the voice of the wise and generous majority, the clear implication was that his opponents, chiefly Republicans and corporate entrepreneurs, constituted a shortsighted, greedy minority. (124)

In describing himself as liberal and his opponents as conservative, Roosevelt was invoking values and summarizing information in a special way. The word ‘liberal’ implied governmental generosity whereas ‘conservative’ implied minimal government and a procorporate perspective. This vocabulary not only reinforced the idea of inevitable corporate combinations under minimal government but established Roosevelt as the champion of countervailing power…The liberal label was also useful for undercutting critics who accused Roosevelt of ‘socialist,’ ‘communist,’ or even ‘fascist’ tendencies. (124)

From Roosevelt’s point of view, important as it was that the New Deal be identified as liberal, it was equally important that these critics be identified as conservative. In one sense, the reason was obvious: the label would link them to ‘economic royalists’ and ‘organized money’ and discredit them by association. But this only raises another question. What were these self-styled liberal critics [like John T. Flynn and Robert Taft] saying that was so threatening to Roosevelt’s popularity? (127)

As Flynn put it, the point was to show what Roosevelt was doing ‘under the label of liberalism’…The terms ‘liberal’ and ‘liberalism’ [Herbert Hoover] remarked…were being ‘perverted’ and ‘used as a camouflage for the wholesale violation of the principles of liberty’… (128)

The crux of the matter was Roosevelt’s relationship to large corporations. Roosevelt himself conveyed an image of antagonism but the reality, critics charged, was exactly the reverse. Roosevelt was using the liberal label to camouflage the construction of an unprecedentedly powerful corporate-government alliance. (129)

As early as the fall of 1933, Flynn charged that Roosevelt was… giving more and more power to large corporations through the NRA production codes… ‘It has been sold to our people as a great liberal revolution,’ Flynn angrily declared. ‘That is a fraud. It is nothing else than the scheme which the Chamber of Commerce of the United States has been fighting for for twelve years—the modification of the Sherman anti-trust law and turning over the control of industry to the tender mercy of the trade associations.’ (130)

Among the Republican leaders, none was more vociferous than Taft is attacking the supposed generosity of the New Deal. ‘It is easy,’ he remarked, ‘to call oneself a liberal; it is much harder to devise the measures which will really benefit the average man and woman. If the ultimate result of New Deal measures is to deprive the average man of freedom and opportunity, and subject him to crushing taxation and monopoly prices, then it is a false liberalism’… (130)

Flynn continued to attack Roosevelt’s use of language, and by 1939 was accusing him of using liberal rhetoric to camouflage an outright abdication in favor of ‘big business’… When Flynn repeated his thesis in the pages of the Yale Review, Roosevelt responded by writing personally to its editor Wilbur Cross to suggest that Flynn had become a ‘destructive rather than a constructive force’ and should ‘be barred hereafter from the columns of any presentable daily paper, monthly magazine or national quarterly such as the Yale Review.’ … By late 1940, Flynn and like-minded critics would indeed have difficulty finding ‘presentable’ outlets. (132-33)

Social science is part of the language trap, Green explains:

When the political categories of political actors become the investigative categories of social science, the very possibility of critical analysis is undercut…[Social scientists] routinely use the words liberal and conservative without quotation marks…This transference of Rooseveltian usage into social science vocabulary has had an immeasurably powerful impact on American political thought. It reifies labels on Roosevelt’s terms, makes supposedly critical scholars into custodians of his definition of the situation, reinforces his intellectual and political victory, and in so doing undercuts the possibility of reassessment. Even to write critically about something called ‘New Deal liberalism’ is not to get to the heart of the matter. So long as one’s investigative and analytical categories are Roosevelt’s own, one remains imprisoned within a Rooseveltian perspective. Only when one treats political vocabulary as historical data does that perspective lose its imprisoning power. Roosevelt’s definitions fall into place as political weapons, as partisan contributions to an ongoing struggle… (126-27)

In my view, one does well to climb out of Roosevelt’s trenches and rejoin the great arc of Western civilization. The more people who uphold the liberal semantic christened by Smith, the better. Elsewhere I have laid out ten reasons why one should not call leftists ‘liberal,’ and used “conservative liberalism” for Smith’s political outlook.

This article, FDR Versus Liberalism: Quotations From David Green, 1987, was originally published by the American Institute for Economic Research and appears here with permission. Please support their efforts.

The $1.2 Billion Snub: Scholastic Corp. Boss Cuts Family From Will And Leaves Fortune To Former Lover