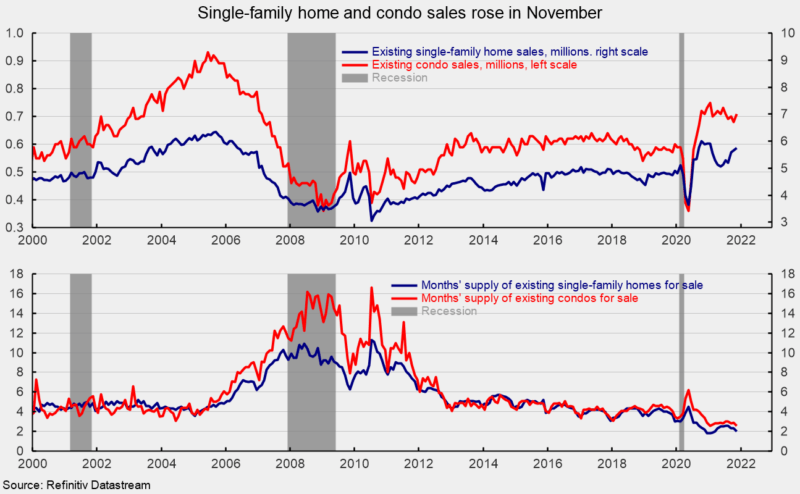 Total inventory of existing homes for sale fell in November, declining 9.8 percent to 1.11 million, leaving the months’ supply (inventory times 12 divided by the annual selling rate) down 0.2 months at 2.1; months’ supply was as low as 1.9 at the beginning of the year and as high as 2.6 in July and August.

The median sale price in November of an existing home was $353,900, 13.9 percent above the year ago price. For single-family existing home sales in November, the price was $362,600, a 14.9 percent rise over the past year (see second and third charts).

The median price for a condo/co-op was $283,200, 4.4 percent above November 2020 (see second and third charts). Price gains have slowed significantly for condos while prices for single-family homes continue to rise at a robust pace (see third chart again).

Housing is likely to be volatile over the coming months as fundamentals adjust to changing market conditions. New waves of Covid and more opportunities for employees to work from home are likely to impact demand while supply chain issues and labor difficulties impact supply.

This article, Existing Home Sales Remained Strong in November Amid Tight Supply, was originally published by the American Institute for Economic Research and appears here with permission. Please support their efforts.