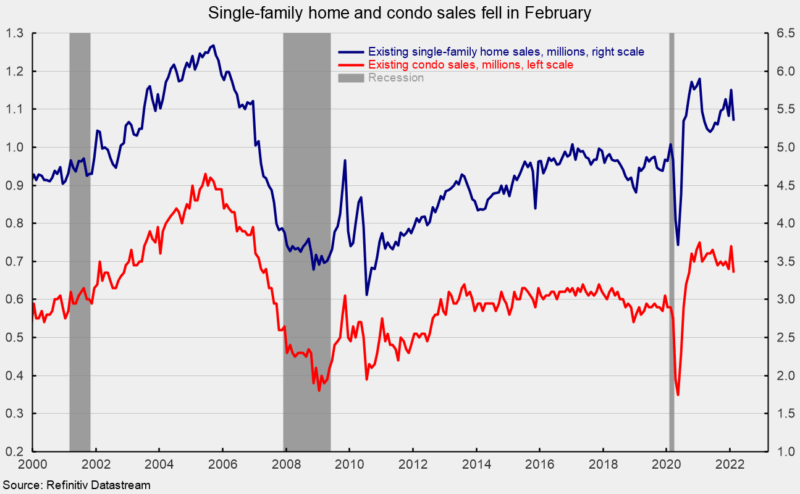 Sales of existing homes decreased 7.2 percent in February, to a 6.02 million seasonally adjusted annual rate. Sales are down 2.4 percent from a year ago.

Sales in the market for existing single-family homes, which account for about 89 percent of total existing-home sales, dropped 7.0 percent in February, coming in at a 5.35 million seasonally adjusted annual rate (see first chart). From a year ago, sales are down 2.2 percent.

Total inventory of existing homes for sale rose in February, increasing by 2.4 percent to 870,000, leaving the months’ supply (inventory times 12 divided by the annual selling rate) up 0.1 month at 1.7.

Housing is likely to be volatile over the coming months as fundamentals adjust to changing market conditions. Increased opportunities for employees to work remotely are likely to impact demand while supply chain issues and labor difficulties impact supply. Furthermore, elevated prices and the recent jump in mortgage rates may push some buyers out of the market.

This article, Existing Home Sales Fell in February but Supply Remains Extremely Tight, was originally published by the American Institute for Economic Research and appears here with permission. Please support their efforts.