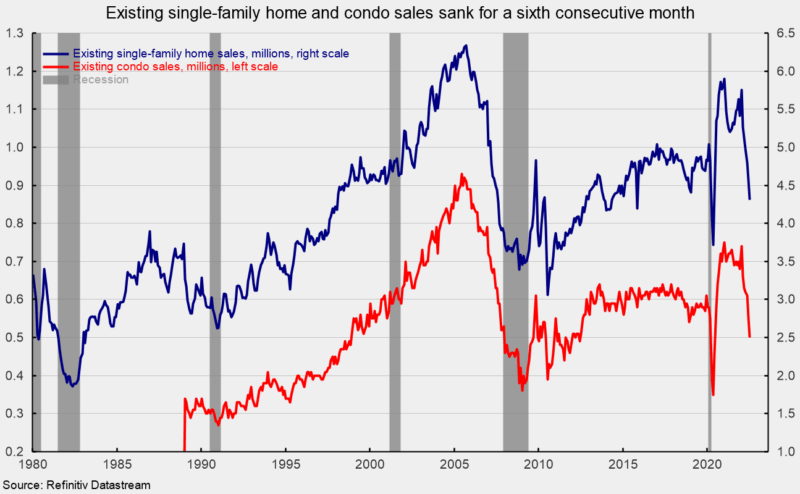 Sales of existing homes sank another 5.9 percent in July, to a 4.81 million seasonally adjusted annual rate. That is the sixth consecutive monthly decline leaving the selling pace at the lowest level since May 2020, the low of the lockdown recession. Excluding the lockdown recession, sales are at their lowest since November 2015. Sales were down 20.2 percent from a year ago and 25.9 percent from the January peak.

Sales in the market for existing single-family homes, which account for about 89 percent of total existing-home sales, dropped 5.5 percent in July, coming in at a 4.31 million seasonally adjusted annual rate (see first chart). Sales are down 19.0 percent from a year ago and 25.0 percent from the January peak. Single-family sales also fell for the sixth consecutive month and were at their slowest pace since the May 2020 lockdown recession.

Total inventory of existing homes for sale rose in July, increasing by 4.8 percent to 1.31 million, leaving the months’ supply (inventory times 12 divided by the annual selling rate) up 0.4 months at 3.3, the sixth consecutive increase and the highest since June 2020, but still low by historical comparison.

For the single-family segment, inventory was up 5.4 percent for the month at 1.17 million and is 3.5 percent above the July 2021 level. The months’ supply was 3.3, up from 2.9 in the prior month, the highest since June 2020 (see second chart). Through June 2022, the months’ supply of new single-family homes on the market had surged to 9.3 months, the highest May 2010, and a very high (weak) reading by historical comparison (see second chart).

Mortgage rates have eased back recently, hitting 5.22 percent around mid-August, down from a peak around 5.81 percent in late June but still well above the lows around 2.65 percent in January 2021 (see fourth chart).

The combination of near-record-high home prices and sharply higher mortgage rates has sent housing affordability plunging. The Housing Affordability Index from the National Association of Realtors measures whether or not a typical family could qualify for a mortgage loan on a typical home. A typical home is defined as the national median-priced, existing single-family home as calculated by NAR. The typical family is defined as one earning the median family income as reported by the U.S. Bureau of the Census. A value of 100 means that a family with the median income has exactly enough income to qualify for a mortgage on a median-priced home. An index above 100 signifies that a family earning the median income has more than enough income to qualify for a mortgage loan on a median-priced home, assuming a 20% down payment. As of June, the index stood at 98.5, the lowest since June 1989 (see fourth chart).

Housing is likely to continue to be under intense pressure as near-record-high prices and elevated mortgage rates reduce affordability and push more and more buyers out of the market.

This article, Existing Home Sales Continue to Collapse, was originally published by the American Institute for Economic Research and appears here with permission. Please support their efforts.