Everything Is the Fed’s Fault: A Review of the Fiat Standard 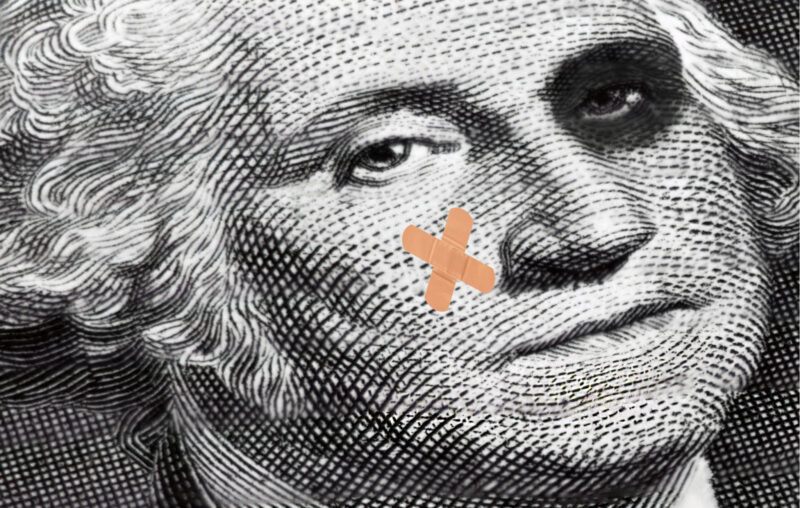 St Thomas More, an English statesman and one of  the 100 Greatest Britons, is rumored to have said the following on the eve of his execution:

This quotation is likely apocryphal, attributed to More only because he seems like the heretical, idealistic, humanist character who would say something like that.

The quotation also captures part of what Saifedean Ammous means by “Fiat.” Ammous, or ‘Saif’ as he is more affectionately known to his Bitcoin supporters, was ushered into fame with his popular 2018 book, The Bitcoin Standard. Over the last few years, his frequent podcasting, fiery tweeting, and recurring appearances in debates have made him a household name in Bitcoin.

Now he’s back with a sequel: The Fiat Standard: The Debt Slavery Alternative to Human Civilization. Having well described how and why Bitcoin operates, Saif is in a good position to turn that lens back onto the incumbent monetary system to investigate its inner workings. The current system is not new. 2021 marked fifty years since the Nixon shock, and over a century since World War I ended the classical gold standard. As Saif writes, “it is now possible to pass judgment on this monetary standard.”

The provocative title aside, the book is an investigation into the monetary system under which we live. The book is not a typical study of a monetary system. Saif explores a multitude of topics of the modern world: energy, universities, schooling, health and dietary advice, and architecture. According to Saif, all have been ruined by the fiat system.

Everything That’s Bad is Fiat

To Saif, fiat means something like ‘fake’ or ‘pretend.’ It represents something as ridiculous as trying to flatten the earth by a mandate from the government. It means trying to get something for nothing. Or taking shortcuts that give relief in the short term yet produce dire consequences in the long term; which Saif describes as “like sniffing glue,” in order to get a short-term high at the cost of long-term health.

He uses fiat in its normal meaning too: to refer to a monetary system based on intrinsically worthless paper money, used, stewarded, and circulated by government decree. Expectedly, Saif rails against running the fiat money printer and the central bank’s fiat system, but also criticizes things like US energy policy – one that according to Saif aims to “replace oil and hydrocarbons with inferior alternatives.” Because, as Saif says, since these aren’t selected by the market, the government must impose them “by fiat.”

Saif’s vacillating use of the term fiat is confusing. Sometimes it means funding; sometimes it means the imposition of a centralizing worldview of Big Government control. And sometimes it’s a mentality, a persuasion that other people’s lives and things are policymakers’ to command, a short-termism that heavily prioritizes today over tomorrow.

He dubs climate scientists who trumpet doom, gloom, and hysteria for minor shifts in atmospheric gases “fiat climatologists.” He refers to Microsoft as “the world’s most fiat software company” and Bill Gates as “the world’s most fiat man.” Science and academic publishing are not safe either. Saif declares they are governed “by a single authority with infinite fiat at its disposal.” He designates universities, captured by their staff and Marxist ideologues, as “fiat universities.” Development economics is next, which Saif proclaims as harmful nonsense, and the development industry, which he renames the “misery industry” sits on “fiat foundations.” Finally, he takes on architecture and government planning. To him, ugly buildings are “fiat architecture” and government welfare programs have undermined the role of the family, and turned it into “fiat family.”

On and on it goes. The book reads like a 350-page under-sourced rallying tweet full of insults, name-calling, and hyperbolic language. While entertaining, it’s tiresome – and worth very little. Saif’s aggressive tone and outlandish claims undercut his argument and bewilder the reader. He rarely provides references for his claims, and seldom does he even identify the opponents he attacks. We are to take Saif’s word for it, his denouncement accepted as (fiat?) gospel.

Anyone who endures the full length of the book deserves a medal.

And Fiat Made that World Bad

Saif’s main idea is that all that is wrong with modern life stems from a faulty monetary system. It’s not exactly compelling (that’s too big and too unproven of a claim) but it has a certain appeal. The way Saif sees it, lots of areas of life are wrong at the same time. What explains the errors must be something that touches the entire Western world and all its areas of life – something like our money. And something that the dire quality of our money has made us all do, leading to a change in all of our values.

A proper money, or one that doesn’t melt like an ice cube as it depreciates in your hand, allows individuals to calmly plan ahead without discounting the future so heavily. He refers to Bitcoin as the cure, writing that it “reinstates reason to a world wrecked with the insanity of reality by fiat.” To Saif, Bitcoin lowers its users’ time preference by giving them a safe store of value in which to hold savings and it incentivizes people to look much further into the future. It also strips governments of funds, first because it radically cuts the demand for government bonds, and second by curtailing the ability for central banks to backstop markets (and in the limit, abolishing them). If government isn’t funding schools and universities, providing research grants, or meddling in energy markets with renewable mandates in conflict with reality, Saif thinks that almost all the madness that he sees around him will go away.

He’s certainly correct to call margarine and soybean lecithin “abominations” and to ridicule promoters of solar and wind power as “effectively rolling back human civilization.” But if you’re not already on the carnivore-leaning, health-conscious trend of eschewing government nutritional guidelines, this strikes the reader as hyperbolic and annoying. And if you don’t already understand how vital fossil fuels are to modern life, and how catastrophically bad their proposed replacements are, these inflammatory rallying claims do nothing to persuade you. They probably just set off alarms of poor scholarship and motivated reasoning. Even if we accept what he says about margarine and vegetable oils, about solar energy and modern architecture, the direct connection to fiat money is far from clear. Do people with harder money really eat better food, have better morals, construct nicer buildings? Would instituting the Bitcoin standard make the overwhelming majority of Americans who are obese eat and live better, and cure those who are metabolically dysfunctional?

The book is also teeming with errors – and not just about the academic disciplines Saif sets out to denounce, but simple ones that are too numerous to be random. The Bretton Woods conference is dated to 1946, not 1944, and the Glass-Steagall Act to 1934 whereas the act with that name was passed in 1932 (and the legislation he refers to instead included under the 1933 Banking Act). When the US confiscated gold during the Great Depression and increased the legal rate from $20.67/ounce of gold to $35 (in 1933, not 1934 as Saif writes), we learn that that’s a 43 percent devaluation of the dollar – but anyone with a calculator can figure out that (1/35) divided by (1/20.67) equals 0.59, i.e. a 41 percent devaluation.

He doesn’t seem to understand that the 88.3 percent dollar figure in all foreign exchange trades refers to the dollar on either side of the trade, and so the percentages in the source he cites sum to 200. He misreads a source’s point about the inventor of Corn Flakes, John Kellogg, when the source itself described his brother William. Karl Marx and Friedrich Engels’ The Communist Manifesto is said to be written in 1844, instead of the winter of 1847-48 that a simple googling would have shown. And these are some of the innocent errors.

The errors get worse when Saif speaks on the monetary system that drives his ire. The Fed sets the Federal Funds Rate (it doesn’t), and all other interest rates derive from that (they don’t). The Federal Funds rate is not an administered rate – it’s an interbank market rate and the Fed targets a level that it, in turn, can impact by intervening on the buy or sell side. Over a decade into the experiment that the Fed unleashed after 2008 with an actual administered rate (“interest on reserves”), Saif should be aware by now that this is the Fed’s main instrument for monetary policy.

Other rates in the economy don’t derive primarily from the Federal Funds Rate – there are plenty of other asset indicators that market participants and real-economy agents use, such as yields on long-term government debts.

Fiat means that the ultimate source of a given institution’s funds is from the government. And Saif rarely bothers with distinguishing the Fed (the issuer of fiat) from the government – the distributor of government rules and funds. Thus, he writes that the Federal Deposit Insurance Corporation plays the official role as a lender of last resort, and that central banks compensate depositors in failing banks. That’s entirely backwards. The Fed is the nation’s lender of last resort, but it lends to illiquid banks and does not reimburse depositors. The FDIC, not the Fed, reimbursed the depositors of hundreds of failed banks during the Great Recession of 2008-2009.

What to Say About Saif’s New Monstrosity?

If you like aggressive denouncement of all manner of things, The Fiat Standard is for you. If, however, you can look past his zealotry, Saif points to some serious problems. He is right that higher education is in shambles, that much that goes on there is navel-gazing, “content-free papers,” and citation cartels. He is right that we eat ourselves into unhealth, and the kindest thing that can be said about official dietary advice is that they’re captured. He is right to call the greening of the grid “fiat thermodynamics,” and to attack the terrifying delusion that governs the green energy crowd.

It’s the connection to fiat money that’s unsettled, yet that’s his great claim to fame. Much government stupidity can go on even without resorting to a printing press: for governments, taxes are a much larger resource transfer than is inflation.

The aggressive tone aside, the emphasis on a fiat mindset – one where you get something for nothing and can have something merely by decree – is valuable. The thesis remains unproven, but the proposition lingers long after the final page.

This article, Everything Is the Fed’s Fault: A Review of the Fiat Standard, was originally published by the American Institute for Economic Research and appears here with permission. Please support their efforts.