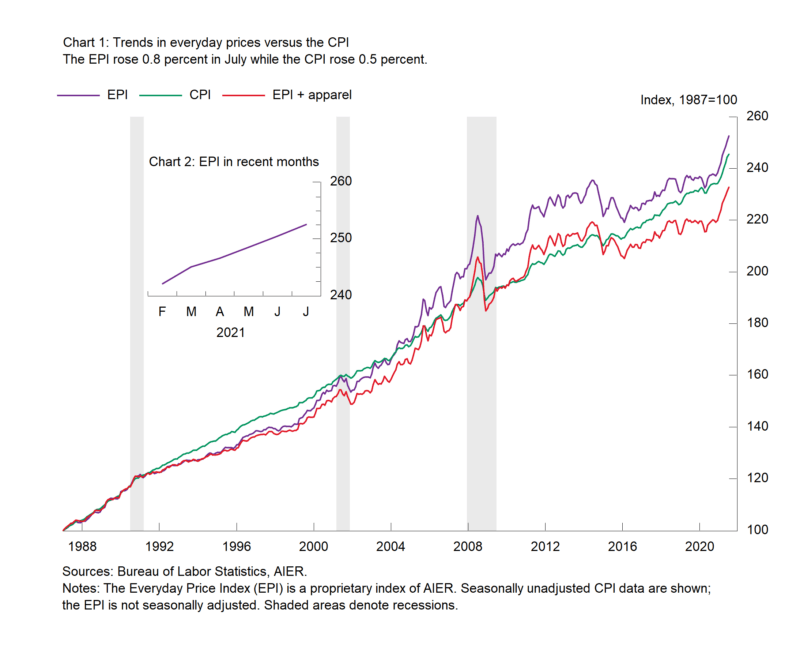 The AIER Everyday Price Index increased by 0.8 percent in July, the third consecutive increase of that size and the eighth month in a row with a gain of at least 0.5 percent. The most recent rise puts the 12-month gain at 6.4 percent, the fourth month in a row above 6 percent. The last time the Everyday Price Index posted four consecutive 12-month gains above six percent was July through October 2011.

The Everyday Price Index including apparel, a broader measure that includes clothing and shoes, rose 0.7 percent for the third consecutive month and is also the eighth consecutive increase. Over the past year, the Everyday Price Index including apparel is up 6.3 percent, the third month in a row above 6 percent. Apparel prices fell 1.0 percent on a not-seasonally-adjusted basis in July, the third fall in the last four months and sixth drop over the past ten months. From a year ago, apparel prices are up 4.2 percent.

The Consumer Price Index, which includes everyday purchases as well as infrequently purchased, big-ticket items and contractually fixed items, rose 0.5 percent on a not-seasonally-adjusted basis in July. Over the past year, the Consumer Price Index is up 5.4 percent, the same as in June and equaling the fastest pace since August 2008.

Among the notable increases in the core CPI were new vehicles (up 1.7 percent in July and 6.4 percent from a year ago), and tobacco and smoking products (up 0.5 percent for the month and 6.4 percent from a year ago). Used car and truck prices gained 0.2 percent for the month, much slower than the 10.5 percent surge in June. Over the past year, used car and truck prices have increased 41.7 percent.

Among core services, gainers include lodging away from home including hotels and motels (up 6.0 percent in July) and motor vehicle repair services (2.0 percent).

Prices for many goods and services in the economy continue to be distorted by lingering effects from government restrictions on consumers and businesses including shortages, logistical and supply chain issues, and labor problems. As activity returns to normal, supply and demand will adapt and likely lead to slower price increases, but it may take some time before the economy completely returns to normal functioning. Nevertheless, a 1970s-style upward price spiral remains unlikely.

Note: The Everyday Price Index for June is based on incomplete data due to restrictions on data collection by Bureau of Labor Statistics personnel because of the Covid-19 pandemic.

This article, Everyday Price Index Outpaces the CPI in July, was originally published by the American Institute for Economic Research and appears here with permission. Please support their efforts.