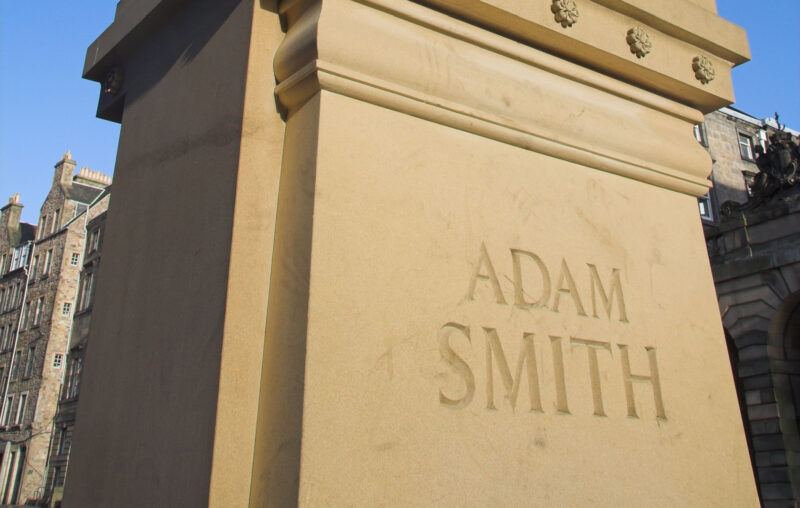 The word sympathy (and its cognates) appears 290 times in Adam Smith’s The Theory of Moral Sentiments (TMS). In a letter to Smith (28 July 1759), David Hume said that the agreeableness of sympathy is “the Hinge” of Smith’s entire moral theory. Yet in Smith’s subsequent and much longer work, The Wealth of Nations (WN), the number of times that ‘sympathy’ appears is zero. Consider that: 290 in TMS, 0 in WN. It is impossible not to see that as a conscious, deliberate choice by the author. And it raises the question: Is Smith’s moral hinge absent from WN?

There is a very clear shift in the language used by Smith in his two great works. Table 1 lists words that are characteristic of TMS. Those words speak of the individual’s sentimental endeavor to make sense of her social world and her place in it. They speak of her path upward in wisdom and virtue. In TMS, the human being is viewed with inner intricacy. There is an intimacy. That inner intricacy is quite absent in WN. When one passes from reading TMS to reading WN, one notices a striking shift away from the warm sense of human relations, aspirations, and the inner call to virtue, to a cooler, more distant treatment of social processes and social mechanisms. That the words listed in Table 1 are so little used in WN—2.6 times the length of TMS—is truly striking.

The shift is well-known to Smith scholars, and it speaks to the relationship between TMS and WN. The consensus of Smith scholarship today, with which we concur, is that there is just one Adam Smith, even if the two works differ in feeling and perspective. Indeed, a dialectical mixing of perspectives happens within a famous passage of TMS, the parable of the poor man’s son, where a “splenetic” perspective is followed by a perspective of “better health and better humour” (TMS 183.9). There’s nothing inconsistent about an author developing differing feelings or perspectives.

In TMS, Smith develops moral theory in a way that keeps the agreeableness of sympathy the central hinge. In WN, Smith develops political economy: he takes the purposes of any given individual at a distance, and goes from there. The implicit lessons are that beyond the intimacy of relational knowledge, we cannot much know the deeper springs of the individual’s purposes. Political economy—“the science of a statesman or legislator” (WN, 428.1)—cannot hope much to instruct or engineer the deeper springs of those purposes. Compared to voluntary corrective measures and social feedback offered by friends, family, colleagues, and customers, the manipulations of public policy are blunt, like taking a hammer to the intricate workings inside a watch. And, the manipulations of public policy are, as Smith continually reminds us in WN, highly subject to greed, folly, and superstition.

The only word in Table 1 used more often in WN than in TMS is charity. But WN is much longer than TMS. To adjust for length, we multiply the term frequencies for TMS by 2.6, as WN is 950 pages in the modern Glasgow edition (OUP/Liberty Fund), and TMS is 366 pages (we include the Language essay as part of TMS), and 950/366 is approximately 2.6. The rightmost column in Table 2 shows the ratio, adjusted for length.

Difference between TMS and WN in word usage is also seen in TMS’s heavy use of musical and synchrony metaphors such as harmony, pitch, concord, discord, and keep time with, yet slight in WN. A count of such terms (provided here) dovetails with the tables above.

Man’s ability to sympathize with others is constrained by knowledge. The more that someone knows about another’s situation the more completely she can enter into the other’s sentiments. People desire sympathy, but for people to be able to enter into a person’s sentiments, that person must lower “his passion to that pitch…which the spectators are capable of going along with” (TMS 22.7).

We expect still less sympathy from an assembly of strangers, and we assume, therefore, still more tranquility before them, and always endeavour to bring down our passion to that pitch, which the particular company we are in may be expected to go along with (TMS 23.9).

The account of sympathy that Smith gives in TMS should prepare the reader to expect works like WN to take people’s purposes as we seem to find them, and as they themselves frankly present them in transactions. We do not appeal to benevolence to get our dinner from the butcher, baker, or brewer. However, we can expect a ride to the airport from a friend or family member by appealing to their benevolence. The difference in how appeals are made is not the result of a schizophrenic understanding of human nature, but rather knowledge that different sentiments prevail depending on the nature of a given relationship. J.R. Clark and Dwight Lee also discuss what they call the amiable morality of TMS as opposed to the mundane morality of WN.

Smith saw WN as an extension of TMS. In the final paragraph of TMS, Smith announces that he “shall in another discourse endeavour to give an account of the general principles of law and government, and of the different revolutions of society, not only in that which concerns justice, but in what concerns police, revenue, and arms, and whatever else is the object of law” (TMS 342.37). In the 1790 preface to TMS, Smith confirms that he thought of WN as completing his promise to give an account for what concerns policy, revenue, and arms.

The connection between TMS and WN can be understood in terms of Smith’s four sources of moral approval. When we consider the action by some fellow, call him Jim, we consider four sorts of viewpoints. The first three are more micro in nature:

WN continues to instruct us in virtue. The chief action that Smith is trying to improve is the readers’ estimation of ideas and judgments in economics and political economy. Those objects of estimation are social processes involving many people about whom we know very little. But the program remains one of virtue—a program in estimating objects properly.

In the opening passages of WN, Smith appeals to the taste for beauty and order in the division of labor in the pin factory. Smith then extends the appreciation to activities “from the remotest corners of the world!” (WN 23.11) that make the woolen coat. Our appreciation of that immense concatenation lacks the visible scene of a factory floor. People participating in the immensity can be thought of communicating and cooperating with one another only metaphorically. Each person’s inner moral springs are unknown to us analysts and almost all of those who take part in the immense concatenation.

The full title of TMS presents the book as focused on the principles by which men judge their neighbors and themselves: “The Theory of Moral Sentiments, or An Essay towards an Analysis of the Principles by which Men naturally judge concerning the Conduct and Character, first of their Neighbours, and afterwards of themselves.” There is more about politics than that full title suggests, and some of it may be between the lines. But for the most part the reader of TMS is left to wonder how citizens should judge the rules laid down by rulers. In WN Smith treats the principles by which men can judge the character and conduct of governors.

The first ‘spectator’ is in the pin factory: “those employed in every different branch of the work can often be collected into the same workhouse, and under the view of the spectator” (WN 15.2). The second comes while Smith addresses how people get caught up in faction. Those of distant provinces are less likely to get caught up in the factional ambitions that run rampant within the heart of the empire. The distances “makes them enter less into the views of any of the contending parties, and renders them more indifferent and impartial spectators of the conduct of all” (WN 945.90).

As for WN’s two uses of ‘sentiment,’ one returns to the scene of division of labor on the factory floor. Smith portrays the moral effects of narrow specialization. He describes the man who is employed in a simple, monotonous task as becoming not only dull and ignorant, but incapable of “conceiving any generous, noble, or tender sentiment” (WN 782.50). Smith does not present his readers with a one-sided view of the effects of industrial life, but instead provides a balanced presentation, and uses the term sentiment to draw attention to the various moral effects of market activity.

WN’s other use of ‘sentiment’ comes in Smith’s analysis of teachers who earn a significant part of their salaries through fees from their students. Some teachers, he says, are concerned for their reputation, which depends on “the affection, gratitude, and favorable report of those who have attended his instructions; and these favourable sentiments he is likely to gain in no way so well as by deserving them” (WN 760.6). Here Smith highlights how market activity can move people toward virtue.

The dramatic difference in the language used by Smith in his two books does not reflect a change in Smith over time. The last great achievement of Smith’s life was revising and expanding TMS, enhancing its inner richness. The additions in 1790 included “Of Universal Benevolence,” in which Smith squares duty to universal benevolence with attention to life’s focal matters, as effectiveness in acting beneficially to the whole depends on knowledge, and your focal matters are part of the whole (see Matson here). The language shift is all part of a larger, coherent, unified attempt to improve people’s judgments.

Smith does not treat the intricacies of the souls of the actors in WN. WN treats social forces in a de-personalized language. It uses generalizations such as labour, price, rent, speculation, capital, and profit. It speaks of markets in land, wool, corn, and pots and pans.

So, don’t leave TMS behind when reading WN. Intricate souls the actors in WN surely are. What, after all, is the inner substance of the wealth of nations? We turn to WN here where Smith thinks beyond pots and pans:

[I]f the quantity of victuals were to increase, the number of pots and pans would readily increase along with it… [T]he quantity of plate is regulated by the number and wealth of those private families who chuse to indulge themselves in that sort of magnificence: increase the number and wealth of such families, and a part of this increased wealth will most probably be employed in purchasing, wherever it is to be found, an additional quantity of plate: that to attempt to increase the wealth of any country, either by introducing or by detaining in it an unnecessary quantity of gold and silver, is as absurd as it would be to attempt to increase the good cheer of private families, by obliging them to keep an unnecessary number of kitchen utensils.

This article, Essential Words In- And Not In- Adam Smith’s Essential Works, was originally published by the American Institute for Economic Research and appears here with permission. Please support their efforts.