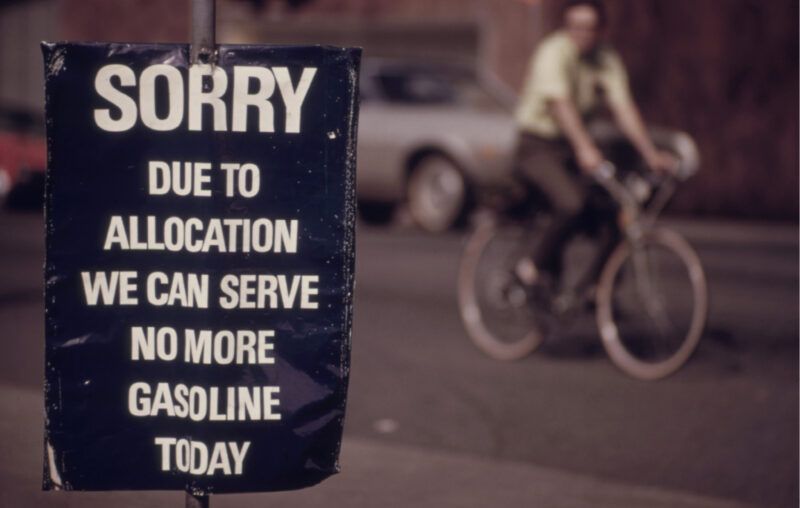 August 15, 1971, forever lives in energy infamy. President Nixon’s 90-day price freeze, as extended, disabled the impersonal market forces coordinating supply and demand. Petroleum shortages began the next year, and the industry was fast-tracked to allocation controls and a suite of government programs to increase supply or reduce demand (“gapism”).

The 1970s energy crisis was underway well before the Arab Oil embargo of October 1973. But the narrative became that OPEC caused the shortages, requiring government to discourage oil imports and otherwise promote “energy security.”

One, there has been an unprecedented breakdown in our energy supply and distribution system; Two, the fuel shortages now being experienced are far more extensive than anticipated; Three, more severe shortages of fuels, particularly gasoline, are in the offing.

For the foreseeable future, the Ford Foundation’s tome A Time to Choose: America’s Energy Future (1974) stated: The energy crisis is real and long-lived; conservation is as important as supply; and, the U.S. needs an integrated national energy policy.”

And it all began with Nixon’s Executive Order 11615—Providing for Stabilization of Prices, Rents, Wages, and Salaries—pursuant to the Economic Stabilization Act of 1970.

The 37th president of the United States got on the wrong side of economic law three years before his resignation by imposing the first peacetime wage-and-price controls in American history.

The business community and labor reined in surprise to offer pragmatic support. John Kenneth Galbraith and Paul Samuelson offered quick congratulations. One notable dissented. “I regret exceedingly … a ninety-day freeze on prices and wages,” Milton Friedman wrote in Newsweek. “That is one of those ‘very plausible schemes … with very pleasing commencements [that] have often shameful and lamentable conclusions.’”

The critics were right. Confirming Friedman’s insight that “nothing is as permanent as a temporary government program,” Nixon’s Phase I turned into Phase II, Phase III, Phase III½, and Phase IV. Worse, petroleum was singled out for continued tip-to-toe regulation under the Emergency Petroleum Allocation Act of 1973 (EPAA), which would not be revoked until early 1981.

The propensity of government intervention to expand from its own shortcomings defined U.S. energy policy in the 1970s. Price deregulation, meanwhile, was off the table.

First, federal bureaucracies managed the shortage with a variety of edicts. Congressional hearings in March 1973 on energy conservation, a first, attracted testimony from the Environmental Defense Fund, Friends of the Earth, and the Sierra Club.

The initial EPAA regulations covering 27 pages in the Federal Register would burgeon into more than 5,000 pages in its first two years. By the time it was over seven years later, there would be “no fewer than six different regulatory agencies and seven distinct price control regimes, each successively more complicated and pervasive.”

Politics were rampant. Between 1977 and 1980, more than 300 energy bills were considered in Congress. State legislatures considered countless more.

Even ardent interventionists would throw in the towel. Senator Edward Kennedy (D-MA) complained about the “outrageous weed garden of regulation.” James Schlesinger, the first head of the U.S. Department of Energy (created in 1977), called the experience “the political equivalent of Chinese water torture.”

And it all started with Nixon’s “temporary” price control order, with energy an afterthought.

Physical shortages of oil (and natural gas under a different regulatory regime) misled economists into thinking that mineral resources, fixed and thus depletable, had a logic of their own. Harold Hotelling, whose journal article, “The Economics of Exhaustible Resources” (1931), mathematically proved how mineral extraction was an increasing-cost industry, was resurrected.

The new subdiscipline of resource or energy economics produced countless articles applying Hotelling’s Rule (“user cost”) to the data of increased scarcity. M. King Hubbert proclaimed victory for his geology-based Peak Oil and Peak Gas predictions. A spreading neo-Malthusian movement, which found voice in Paul Ehrlich and in the Club of Rome’s Limits to Growth (1972), captured the intellectual class.

Scattered dissent such as from Julian Simon and M. A. Adelman was drowned out. And little known, Ludwig von Mises in a single paragraph in 1940 rejected the very notion that non-reproducible minerals possessed a special scarcity value.

Deregulation and the 1980s quieted the depletionists. Oil and gas, after all, are manufactured goods. Had not Mises stated in Human Action that “deposits of mineral substances and their exploitation are not characterized by features which would give a particular mark to human action dealing with them?” And if market forces were appropriate, why did government need to augment supply and/or reduce demand?

A surplus of regulation, not a shortage of oil or gas, caused the 1970s crisis. “When the black day of August 15, 1971 arrived,” Murray Rothbard reminisced, “we free-market economists predicted that shortages of all sorts of products would result….” Added Ayn Rand: “The Arab oil embargo was not the cause of the energy crisis in this country: it was merely the straw that showed that the camel’s back was broken.”

The 1970s stand as one of most grievous eras in the history of energy, and public policy in general. And it happened as a byproduct of a seemingly innocuous, temporary government intervention.

One of the great “ifs” of U.S. political economy is: What would have happened if prices had not been regulated and oil markets could have spontaneously adjusted to the Arab embargo? Higher prices would have resulted in lower prices later on, avoiding shortages and government involvement. And today, energy would be somewhat less political and more nondescript.