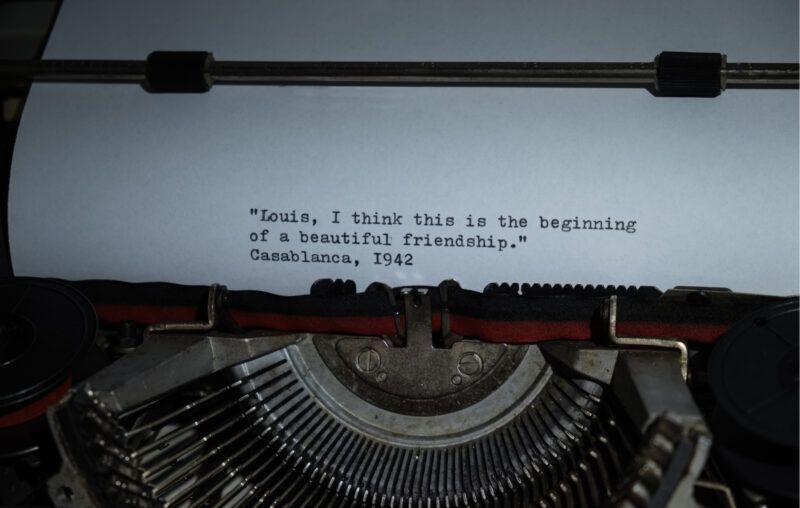 Casablanca (1942) is probably the most poignant economic film ever made. Political economy is its predominant theme, which is made perfectly clear the first time the protagonist (Richard Blaine, business owner) and antagonist (the Nazi Major Strasser) collide. In the scene, the market meets matters of state, as Blaine says, “Your business is politics. Mine is running a saloon.” Although the interchange is civil, the undercurrent is deadly serious. We know this because the next and only time they meet again, at the end of the film, the former kills the latter.

Part one of this essay made the explicit point that art and aesthetics are more implicated in economics than is usually thought to be the case; that each is about the choices we make, the things we value, and about being human. Casablanca is a masterpiece that illustrates this perfectly.

More than a cliché, being human at its most fundamental level is about life. More pointedly, it’s about staying alive. The film is all about people hoping, trying, wanting to stay alive. Indeed, the very first lines spoken in Rick’s Cafe Americain, the film’s main setting, are “Waiting, waiting—I’ll never get out of here. I’ll die in Casablanca.” By and large, we buy and sell things via economic exchange so we can sustain our lives, both physically and emotionally. At a nearby table, a woman is haggling her valuables in exchange for cash, for her life, which an escape from Casablanca will allow. But, unfortunately, she is not alone in her desperate quest, as we learn that “Diamonds are a drug on the market. Everyone sells diamonds.” Why? Because in 1942, in French Morocco, “human beings are the leading commodity.”

Casablanca is a political econo-drama trading in the existential currency of life, death, and love couched in the aesthetic aspirations of art. Events begin with the murder of two couriers, but also with the arrival of the love of two men’s life: “the most beautiful woman ever to visit” the city. The story ends with the murder of the villain and “the beginning of a beautiful friendship.”

This is a world where love and life commingle in a dialogue that interweaves political and economic forces amid a background setting of chance, luck, destiny, and fortune (in every sense of the word). Lives are spun in a casino of events. A tapestry is created in a mosaic of transactions that captures the intimate relationship between human existence and economic exchange.

We first meet Rick Blaine while he writes a check in his café’s casino. However, he seeks to insulate himself from the ecstatic monetary and humanistic free-for-all he oversees. He is playing chess by himself, thereby controlling the outcome of a game as far removed as possible from the vicissitudes of gambling and unfortunate risk. He “sticks his neck out for nobody,” a sentiment stated in consistent refrain. He is his only cause, seemingly.

This makes economic sense. In The Principles of Economics (1890), Alfred Marshall claims that “Political Economy or Economics is a study of mankind in the ordinary business of life; it examines that part of individual and social action which is most closely connected with the attainment and with the use of the material requisites of wellbeing.” This well-being is Blaine’s modus operandi. But the plain fact of the matter is that this is true for all of us, and not just of the film’s protagonist. Self-interest lies at the heart of most of our decisions in life, in one way or another, even when we act on the behalf of others, or a sympathetic cause. For the well-being of these others becomes our own well-being. Its value, both personally and socially, makes us valuable—emotionally, and sometimes financially.

The value of Casablanca is in the picture it paints of human life. Sure all life is important, but we rarely hear why this is so. What are we to take away?. It is that human life is cheap, that it is a game of chance, “A fight for love and glory. A case of do or die.”

We value the lives of others since the end of life is certain for everyone. It is an empathetic part of our shared humanity. We are all—alas—subject to the whims of fortune, destiny, and time. “On that you can rely. No matter what the future brings.” And everybody knows it.

We see this in the cafe many times, when consequential moments take place in the foreground, the roulette wheel spins and a voice rings out “Les jeux sont fait!” (“Bets have been placed!”) in the background, indicating that the wheels of fortune or misfortune are turning.

As a work of art, the story undulates the line of fact and fiction. Historical events and the realism of interpersonal relations are presented in an artistic setting. However, aesthetic fictions such as this ought not be conflated with untruth. Artistic creations are akin to thought experiments. Fictional settings are controlled environments for cultural reflection. In these worlds, all of the various forces of humanistic interlocution can manifest themselves for investigation and consideration. That is what the visual arts primarily do for us: provide places for reflection.

In fact, the most stunning and transcendent scene in Casablanca takes place with Ilsa–the most beautiful woman to ever visit a city–as she stares inward, glossy with emotion and the memory of her bygone life and love. The camera does not move from her face for almost a half a minute. Hers is an image of stillness, charged with eloquent and universal meaning. Destiny brought her to that moment in the café. There is a sense that it brought us there as well.

Casablanca is an artistic masterpiece of visual art and political economy. Its sympathies and empathies swirl amidst a world of economic and humanistic life, like a roulette wheel of fate, or the globe that rotates at the film’s beginning, as if to show us the range of its cultural impact and the lives it has touched.

Frédéric Bastiat claimed, in “That Which is Seen, and That Which is Not Seen” (1850), that “the arts enlarge, elevate, and harmonize the soul of a nation; that they divert it from too great an absorption in material occupations, encourage in it a love for the beautiful, and thus act favourably on its manners, customs, morals, and even on its industry.” Written in the context of 19th century France, I believe the assertion was perfectly applicable in 1942 when Casablanca was released, and is at least as applicable today.

This article, Economics and the Picture Show, Part Two, was originally published by the American Institute for Economic Research and appears here with permission. Please support their efforts.