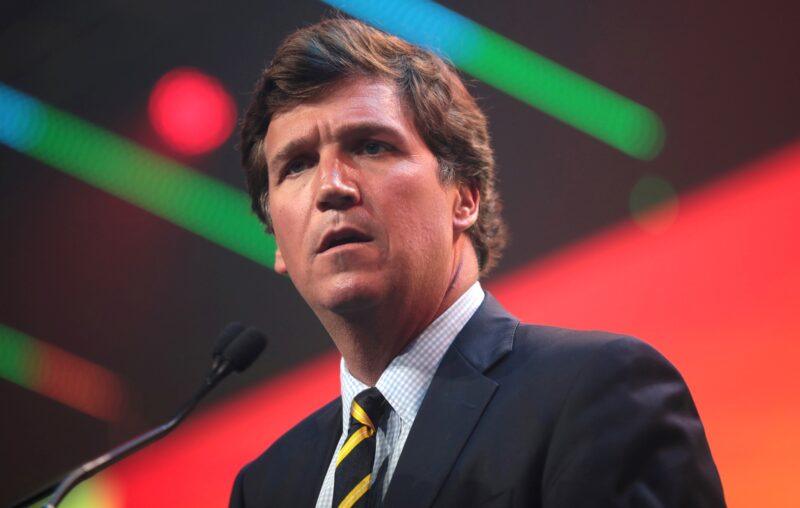 In 2018, future Congresswoman Marjorie Taylor Greene speculated on Facebook that the Rothschild investment bank, which was founded by Jews, used “space solar generators … beaming the sun[’]s energy back to Earth” to fire a “laser beam or light beam coming down to Earth” that ignited the massively destructive Camp Fire in California.

The same year, she posted a video that claims that “an unholy alliance of leftists, capitalists and Zionist supremacists has schemed to promote immigration and miscegenation, with the deliberate aim of breeding us out of existence in our own homelands.”

In 2021, she tweeted that “Vaccinated employees get a vaccination logo just like the Nazi’s (sic) forced Jewish people to wear a gold star.”

Carlson not only has had Greene appear on his show, he also has contributed to her election campaign.

Investigative reporter Lara Logan speculated on a podcast in March that the Rothschilds paid Charles Darwin to “come up with” the theory of evolution.

Carlson has had Logan appear on his show.

Hungary’s pro-Putin prime minister, Viktor Orbán, despite his support for Israel, has rehabilitated the reputation and made a national hero of Hungary’s self-described anti-Semitic and pro-Nazi leader Miklós Horthy. After World War I, Horthy became the first European leader during that era to limit the number of Jews permitted to attend universities. In the late 1930s, he imposed racial laws that disenfranchised Jews and seized most of their property.

Carlson’s show has featured a long interview with Orbán. Carlson has repeatedly lavished praise on him and his regime.

And then there’s Carlson’s favorite foreign policy advisor, the pro-Putin Douglas Macgregor. In October 2021, Macgregor gave a speech in which he blamed America’s “huge problem” on “rootless cosmopolitans.” Stalin used that phrase to attack Jews. It also echoes Hitler’s references to Jews as cosmopolitans.

Both in the runup to and since Russia’s invasion of Ukraine, Carlson on his show has turned to Macgregor, “an honest man” and “the man we trust,” to share his pro-Russian perspective.

Carlson’s fondness for anti-Semites may be connected to his support for an array of socialist views.

In his 2009 book, The Israel Test, George Gilder shows that anti-Semitism is rooted in socialism’s false conception of a free market, capitalist economy as a zero-sum game, in which those who become wealthy do so at the expense of others and business owners are parasites that prey on workers. Anti-Semitism and socialism, Gilder explains, both fail to recognize that a capitalist economy instead is a “positive-sum game, based on an upward spiral of gains,” in which “the achievements of one group provide markets and opportunities for others.”

Carlson’s nativist, anti-immigration view of the US economy is based on this same zero-sum game fallacy. Immigration, he contends, supposedly makes native-born Americans poorer by having more workers compete for the same fixed number of jobs.

Decades of data and comprehensive economic analyses instead show that immigrants raise incomes of native-born Americans, reduce unemployment, have little to no negative effect on the wages of native born workers, and indeed often raise them.

Carlson’s socialist views go beyond immigration. He vociferously argues that retailing giant Walmart – which creates so many US jobs and provides Americans with so many more affordable goods and services – is destroying the US economy by driving small competitors out of business, eliminating jobs, lowering wages, and otherwise devastating communities. He apparently supports some kind of industrial policy, a classically socialist prescription, to prevent Walmart from importing lower cost goods from China and using economies of scale to charge lower prices than its competitors.

Carlson’s position on the political right does not mean that these views are not socialist. In The Road to Serfdom, Friedrich Hayek famously connected socialism – through which government usurps the economic rights of individuals – to tyranny. Hayek dedicated his book “to the socialists of all parties” because socialism infects those on both the right and the left.

Carlson admirably uses his powerful and influential platform to defend freedom of speech and freedom of religion. But those who oppose anti-Semitism and other bigotry and support individual freedom and free markets need to reckon with both his support for anti-Semites and his advocacy of socialist policies that push America down the road to serfdom.

This article, Do Tucker Carlson’s Socialist Views Explain His Support for Anti Semites?, was originally published by the American Institute for Economic Research and appears here with permission. Please support their efforts.

From Hero To Zero: How Terra Was Toppled In Crypto’s Darkest Hour

The Moneyist: ‘I have great plans for myself’: My girlfriend doesn’t understand how her student loan works and rents a pricey apartment. What if we marry — and divorce?