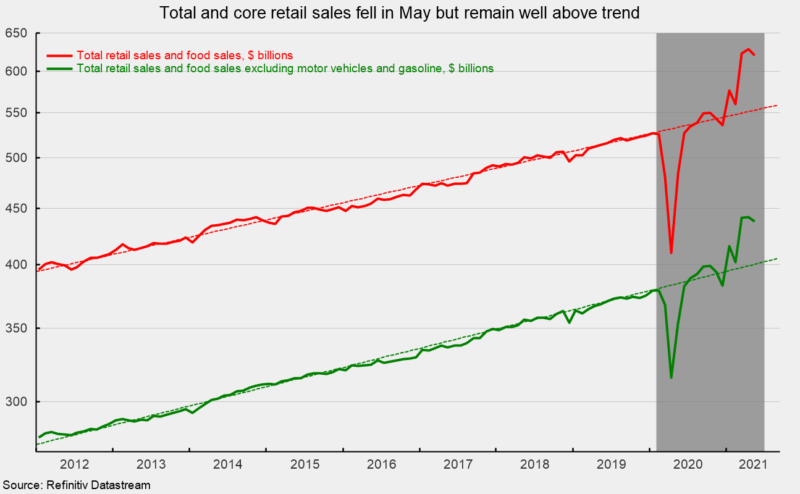 Retail sales and food-services spending fell 1.3 percent in May following gains in three of the prior four months.  The weaker result in May still leaves retail sales at the third highest on record and well above the most recent nine-year trend (see first chart). From a year ago, retail sales are up 28.1 percent.

Core retail sales, which exclude motor vehicle dealers and gasoline retailers, posted an 0.8 percent decline for the month, leaving that measure with a 23.8 percent gain from a year ago. Despite the fall, core retail sales are also at the third highest on record and well above the nine-year trend (see first chart).

Gains and losses for the various categories of retailers continue to be quite erratic. Over the last eight months, two – January and March – had broad gains, two – November and February – had broad declines, while the remaining four were generally mixed (see second chart). For May, the major categories shown in the report had mixed results though most of the declines tended to be in discretionary categories while the gains came in consumer staples.

Decliners were led by a 5.9 percent drop in building material and garden equipment and supplies dealers, a 5.0 percent decrease in miscellaneous store retailers, a 3.7 percent fall in motor vehicles and parts dealers, a 3.4 percent drop in electronics and appliance stores, a 3.3 percent decline in general merchandise stores, and a 2.1 percent pullback in furniture and home furnishings (see second chart).

The gains were led by a discretionary category, clothing and accessory stores which posted a 3.0 percent rise, but other gainers included health and personal care stores, up 1.8 percent, food and beverage stores, up 1.0 percent, and gasoline stations, up 0.7 (see second chart).

Overall, retail sales posted a weak result in May, but it follows three strong gains since the beginning of the year, leaving total and core retail sales well above trend and near record highs. Reopening the economy is supporting a rebound for the labor market, personal incomes, and consumer confidence, suggesting the economic outlook remains favorable. However, difficulty finding and retaining workers, logistical problems, and materials shortages are driving prices higher, and those accelerating prices are impacting consumer sentiment. However, a 1970s-style inflationary spiral remains highly unlikely, and the overall economic outlook remains tilted to the upside.

This article, Discretionary Spending Categories Drag Down May Retail Sales, was originally published by the American Institute for Economic Research and appears here with permission. Please support their efforts.