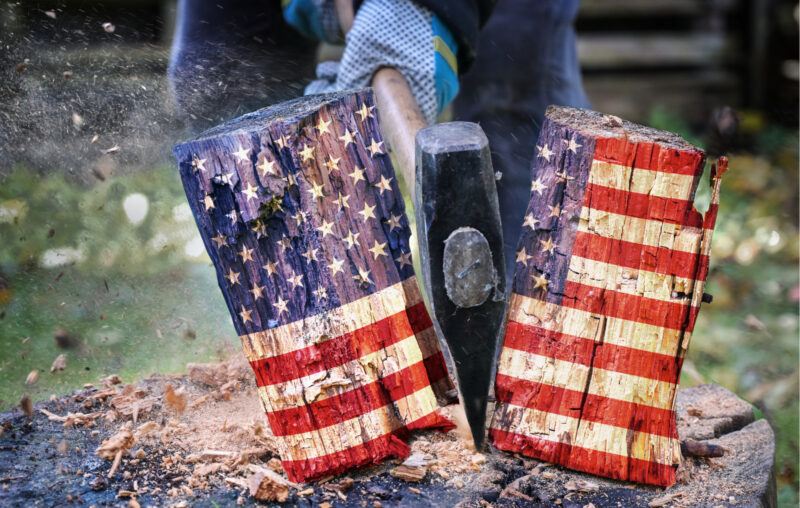 Where every man is a sharer in the direction of his ward-republic, or of some of the higher ones, and feels that he is a participator in the government of affairs not merely at an election, one day in the year, but every day.
– Thomas Jefferson, 1816, on Ward Republics

In the 20th century, Americans had national unity. This unity was achieved through centralized media and government schools inculcating civic narratives. Having a couple of common enemies never hurt, and this wasn’t so much a conspiracy as a sign of the times. In those days, you could find some common ground in the Constitution or the fight against Nazis or Commies.

Those days are over.

Today, illiberal extremists hover over the Republic’s dried detritus: On the far left, there are Twitter mobs with Molotov cocktails; on the far right, there are reactionaries with tiki torches. These extremists are not just hotheads; they risk the Republic’s going up in flames. And there are shades of controversy, culture warring, and class struggles at every stage in between. We haven’t seen this kind of national animus since the 1960s, and it will get worse before it gets better. Increasingly, Americans are getting sucked into weird affinity groups and filter bubbles whose members view outsiders as enemies.

In the internet age, no grand civic narrative can long prevail. Manufactured consent was only possible in the days of ABC, NBC, and state-approved social studies books. We now have an information ecology polluted by sensationalism, groupthink, availability cascades, and meme wars. Those who color outside tribal lines are greeted with hostility. Why? Because too many people have become unmoored from the values and practices that give life meaning. And far too many have divorced themselves from the liberal ideals that animated the American Founding.

As America plunges headlong into a debt crisis, the culture wars continue to distract us. For better or worse, we’re being pulled apart as the government goes broke. And if you don’t think the government is broke, just spend a little more time on this website. You can read about the unsustainable spending and debt here, here, and here.

So What Can Be Done?

It’s time to break up.

There are all kinds of ways to do it. I set out a guide in Part II of After Collapse. If you’re thinking this guy is trying to sell me a book, you’d be right. But I wouldn’t take a dime if I could somehow get it into every American’s hands. The message is important: Trouble is coming. And we have to be prepared for it: mind, body, and system.

After Collapse is not a prepper’s book, though a prepper’s mentality doesn’t seem like a punchline anymore. Instead, each chapter corresponds with seven dimensions along which America is breaking down:

The punchline? Only decentralization can save us. Let me focus on that point for a moment.

Breaking up is hard to do, but it’s not that hard.

We have to create more space for institutional pluralism. So it might be time to break up the country a bit more. Peaceful secession. A loose confederation. At least more federalism. Let people experiment and be united in experimentation. Let the Bernie Sanders supporters turn Vermont into a socialist, buy-local paradise. Let Northern California break off from the Bay Area and SoCal to form the state of Jefferson. Let New Hampshire become even freer. Let the Republic of Texas separate, even if Austin “keeps it weird” as an independent city-state.

This is nothing new. And it works.

Polycentric legal frameworks like those in Switzerland or the Hanseatic League should help us localize tug-of-war-style politics. We don’t have to stop trading with one another (and we shouldn’t, of course). But we’d have to stop trying to impose monolithic laws upon people who prefer to live in different political, cultural, or economic niches. And of course, we have some laws on the books that might help us achieve such a condition.

Some might object that the Articles of Confederation were tried and failed. How will the colonies put down rebellions?, the powdered wigs wondered at the time. Then our Constitution was born. But times have changed. Maybe it’s time to replace the need for revolution with the built-in blessings of decentralization. (Or isn’t there a law for that already on the books?) Perhaps the Articles of Confederation were simply insufficient, but we have the means at our disposal to fashion a robust system that allows for plenty of checks and escape hatches. Debates over the proper size and role of government would be over, and each jurisdiction would have to prove itself. Fifty experiments, at least, would allow us all to vote with our U-Hauls.

Such a system would be a step in creating a more antifragile condition. As Nasim Taleb put the matter,

I am, at the Fed level, libertarian; at the state level, Republican; at the local level, Democrat; and at the family and friends level, a socialist. If that saying doesn’t convince you of the fatuousness of left vs. right labels, nothing will.

Taleb’s quip is based on the idea that local experimentation shouldn’t result in system-wide catastrophes and that we should be going local with our pieties.

So, California’s catastrophes should remain with California. Such a system would drop much of the incentive to think of one’s political ideals as something to be forced down the throats of 330 million souls. Californians could spend lavishly on its failed policies, and Texans would no longer be required to subsidize California’s profligacy, as they were during one of the multi-trillion-dollar pandemic spending bills, despite Silicon Valley’s cash cows.

Instead of a monolithic federal government imposing its capricious will, each jurisdiction would have to use what Dierdre McCloskey calls “sweet talk” to persuade more human souls into their authority. This way, we create more experiments in living and insulate more people from the dangers of centralization. Some of these might lean theocratic. Some might lean socialist. A few, perhaps, might be genuinely free. As long as each serves its customers sustainably, then so be it. Indeed, some of these experiments might include jurisdictions that are not affixed to a territory at all. The more systems there are, the more likely one can find something closer to the right fit, whereas, currently, a naked Emperor is trying to drape its invisible robes around us all.

No need for civil war.

There are too many incentives that keep the current system in place. So it’s time for a national divorce. Decentralization, therefore, is the light at the end of a very dark tunnel for America. Eventually, we may not have a choice — and at that stage, such a breakup will be far uglier and more painful than one we agree to now.

This article, Dear America: It’s Time to Break Up, was originally published by the American Institute for Economic Research and appears here with permission. Please support their efforts.