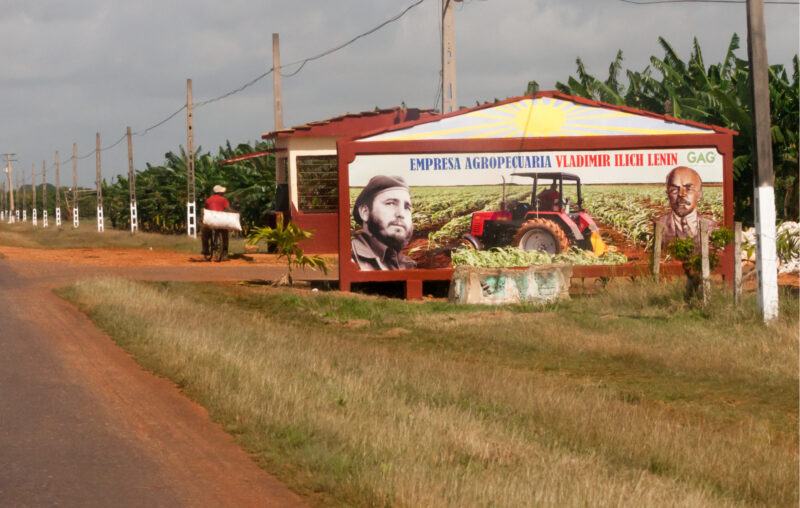 Closed societies with failing agricultural systems can sometimes fool sympathetic outsiders. In 1932 a New York Times correspondent won a Pulitzer Prize for a series of articles celebrating Stalin’s ruthless “collectivization” of agriculture, a policy that brought a collapse in production and starvation for several million Ukrainian peasants. Cuba’s recent street protests over food shortages are a far smaller tragedy, but they stand out as another failure for collective farming, the approach Fidel Castro borrowed from his Soviet patrons. Once again, naïve outsiders failed to see it coming.

When the Soviet Union imploded in 1989, Cuba lost access to highly subsidized imports of fuel and agricultural chemicals, leading to a 42 percent drop in per capita agricultural production between 1990 and 1994. In response, Cuba should have abandoned its state run economy, including its underperforming collective farming model, but instead it improvised with a retreat to pre-modern production methods. Farmers replaced tractors with oxen and hand hoes, fertilizers with animal manure, and chemical controls for pests with biological controls and intercropping.

Outsiders with romantic ideas about Cuba and artisanal farming tried to hail these improvisations as progress. One American food rights activist praised what he called the “rapid and successful” spread of “agroecology” methods on the island. An article in the socialist journal Monthly Review in 2012 claimed that Cuba had delivered the best food production performance in all of Latin America from 1996-2005: “No other country in the world has achieved this level of success with a form of agriculture that uses the ecological services of biodiversity and reduces food miles, energy use, and effectively closes local production and consumption cycles.” An anti-globalization network named La Via Campesina went even farther:

“In just over a decade, the campesino family which practices agroecology has attained the greatest levels of productivity and sustainability in Cuba. Agroecology has achieved what the conventional model has never accomplished in Cuba or any other country: more production from less…”

Inspired by such glowing reviews, even the United Nations began to hail Cuba’s success with agroecology as “an example on a global level.”

The official food production data reported by the UN itself tell quite a different story. These data show that several decades into its experiment with agroecology, Cuba has yet to produce as much food per person as it had in 1990, before the crisis began. In fact, in 2019 Cuba’s official net per capita food production index number was still 41 percent below the 1990 number.

Because its own production was badly lagging, Cuba was forced to rely on expensive food imports. In February 2007, a Cuban Vice Minister admitted that more than eighty percent of the items in the nation’s basic food basket were being imported. But when oil prices fell after 2014, Cuba lost its financial support from Venezuela (an allied regime also struggling with a failed food system), so the imports became more difficult to sustain and shortages in the shops worsened. Covid dried up valuable tourism revenues in 2020, but this was not the source of Cuba’s food problem. Even in the previous year the Cuban government had been forced to begin rationing basics like chicken, eggs, rice, and beans.

Now that Cuba’s food failure has been dramatically unmasked, the external cheerleaders for its agroecology methods have fallen silent. Nor can they blame America’s economic embargo policy for the crisis. It is a Cold War relic that should have been set aside, but the embargo explicitly exempts food and medicine.

The relic in greatest need of abandonment is Cuba’s continued embrace of collective farming. In 2008 Raul Castro did launch a partial reform, by granting idle state land to “private” farm cooperatives, together with small private plots to some individual families. Yet only a bit more than one third of land was privatized, and the new cooperatives remained under virtual state control because farm input markets were not in private hands, and because the farms had to deliver production quotas to the state sector (the acopio system). In addition, the “privatized” land could not be rented, and farmers were not allowed to hire farm labor.

Cuba should have watched and learned from the more complete reforms embraced by China and Vietnam. After control over farm production and marketing was returned to private farm households in communist China in 1978, and then in communist Vietnam after 1988, the result was food abundance, economic growth—and not coincidentally, regime survival. By holding onto Soviet-inspired collective farming institutions, while experimenting with a return to pre-industrial farm technologies, the tone-deaf regime in Havana puts its own survival at risk.

This article, Cuban Farm Fantasies and Failures, was originally published by the American Institute for Economic Research and appears here with permission. Please support their efforts.