Cracks in the Great Wall-Part One: The CCP at 100 Years 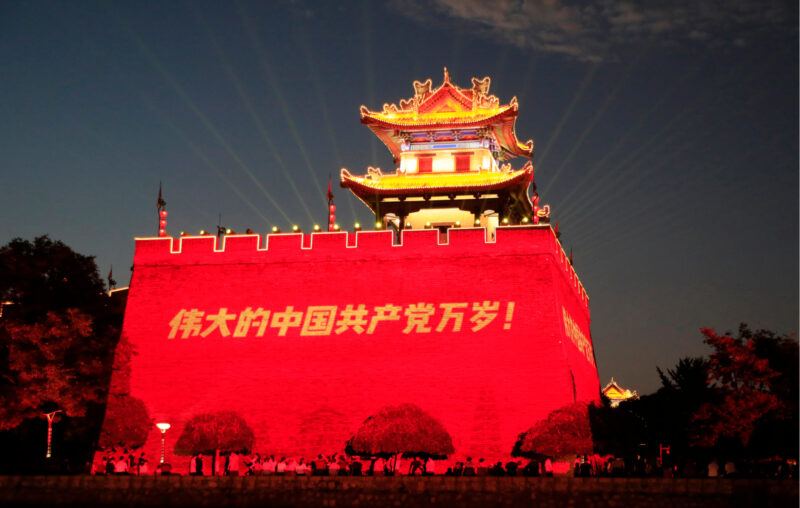 The Chinese Communist Party recently celebrated its 100th birthday, which came accompanied by grand celebrations and a stirring speech by Chinese President Xi Jinping. In the speech Xi recounted the history of the party and the achievements of the People’s Republic of China. He also reiterated some of China’s top priorities such as continuing to modernize its military, maintaining economic growth, preserving its political model, and resisting foreign attempts to curtail its objectives.

While China has certainly made great strides both economically and politically, a look past the soaring rhetoric reveals more problems than strengths.

Many China experts in the United States certainly took alarm at Xi’s speech such as Gordan Chang, who was quoted in Fox News when they wrote,

“Xi Jinping talked about how the ‘Communist Party of China and the Chinese people, with their bravery and tenacity, solemnly proclaim to the world that the Chinese people are not only good at taking down the old world, but also good at building a new one,’” Chang said. “That is ominous because this harks back to what Xi Jinping has been talking about for more than a decade … that the world really should be ruled by the Chinese. My sense is that really was the most critical line in the speech and it didn’t get attention.”

The narrative of an ascendant and threatening China is certainly an important one with plenty of evidence to back it up. It has even partially contributed to counterproductive political ideas such as former President Trump’s trade war or President Biden’s insistence that the US must do more to emulate China’s state spending model.

There is no denying that China has certainly risen in power and poses a considerable threat to the interests of the United States as well as the future of human liberty. However, recent trends suggest that China has some serious roadblocks to overcome as the consequences of the CCP’s own behavior comes back to haunt them.

The Tighter You Clench, The More Sand Slips From Your Hand

Perhaps one of the greatest indicators of coming struggle is China’s increasing grip over its citizens both economically and politically, which is a reversal of previous trends of liberalization. Xi Jinping has recently called for greater private sector loyalty to the party line and has also called for more alignment of its political system with the party as well.

Furthermore, China’s security state has been drastically expanding after seeing decades of rollback, which UCSD Professor Tai Ming Cheung explains is due to a number of setbacks regarding internal disruptions and instability. The New York Times has reported that the CCP has recently begun a crackdown on “illegal non-profits” to which they write,

“The campaign against such dissent reflects concerns among China’s top leaders that the party must do more to strengthen public loyalty and fortify its control of society.

Mr. Xi has long warned that Communist rule could disintegrate if the party does not assert control across society, including the private sector, schools and the news media. Party organs at the national and local levels are hosting study sessions on party history for cadres. Chinese military officials say they are using the centenary to “forge absolute loyalty” to the party and Mr. Xi.”

When regimes tighten control over their populations, that typically means things are not going well, especially when it comes to China, which has heavily restricted its population from questioning the status quo. A reinvigorated crackdown on independent thought can only be in reaction to the subversive effects of outside influences and demands for further liberalization. That is because although China has gotten richer and more powerful through engagement with other countries, such engagement also brings in outside ideas, such as democracy, human rights, and economic freedom.

An emblematic example of this would be the brief disappearance of Chinese billionaire Jack Ma, who merely criticized the performance of China’s financial system. Such criticism was certainly warranted as he was heavily invested in an innovative fintech company known as Ant Group which promised to revolutionize finance. However, such sentiments are dangerous to the long-term credibility of the CCP, which led them to punish Ma and Ant Group.

Such behavior on China’s part is both understandable and counterproductive. On one hand, allowing such dissent and criticism on anything, even productive conversations such as improving the Chinese banking system can lead to greater dissent in the future. At the same time, they are killing the goose that laid the golden egg as liberalization and dynamic thought are what lead to progress in the first place.

It also goes without saying that much of China’s grand ambitions are starting to unravel before them as the consequences of their authoritarian behavior come back to haunt them. China’s once highly celebrated effort to rewire global trade with the Belt and Road Initiative is starting to sputter as countries refuse to accept the sovereignty infringements that come with it. China’s increasing aggression in the Indo-Pacific region has sparked new security partnerships or reinvigorated existing ones such as The Quad to contain China. The Quad is an informal alliance between the US, Australia, Japan, and India. However, it is worth noting that more countries like South Korea, Vietnam and the Philippines are all noting their displeasure with China’s behavior.

Europe has also toughened its stance on China, which has led to a number of notable exchanges such as a back and forth on slavery allegations in Xinjiang as well as a Czech delegation visiting Taiwan, a huge insulting gesture for the Chinese. Finally, among many other problems, China’s long-term economic growth is in jeopardy due to a variety of issues such as an aging population and an inflexible economy. It is also worth noting that China’s GDP numbers are highly inflated and manipulated, so their real success is likely well below the reported numbers.

A Rock and a Hard Place

Limited free market reforms in China brought about much success, lifting millions from poverty and turning it into the global player it is today. In its special economic zones such as Hong Kong (although not for long) and Macau, which enjoy economic freedom greater than most Western countries, the standards of living are greater by orders of magnitude. At the same time, such openness and dynamism also invite free thought, which is why the same policies were not implemented for the rest of the country. Free thought often leads one to look to the outside world and exposure to more attractive ideas, such as a free and open society. This is a serious problem for the long-term rule of the CCP.

In particular, Beijing’s implementation of the recent Hong Kong security law will dissolve many of the freedoms that made the city-state so prosperous in the first place. The move is emblematic of China’s ultimate conundrum: freedom allows it to grow and prosper, but it also spreads dissent.

On the one hand, they must pursue greater economic growth, which is sorely needed as many of its citizens still live well below the standards of the Western world (or even to its free neighbor Taiwan) and also to achieve its goals of global influence. On the other hand is the real danger of increased liberalization for the CCP, especially with the world now highly critical and vocal about China’s human rights abuses.

Furthermore, embracing greater liberalization would shatter the image of infallibility that the CCP has built for itself. Much like Jack Ma took issue with China’s fundamentally flawed state banking system, allowing greater economic competition and exchange of ideas would cause more questions to be asked.

Although Xi Jinping and the Chinese Communist Party certainly put on a great show for their 100th birthday, much like any authoritarian regime, it was a lot of smoke and mirrors. There is no denying that China has achieved many milestones in terms of its economic and political goals. At the same time, its authoritarian policies have consequences and it seems like the chickens are starting to come home to roost.

Those of us in the West should certainly take note, not just because these are important developments regarding our top geopolitical rival, but also so we do not make the mistake of emulating the Chinese. Rather, this should be another reason to double down on our confidence in the superiority of a free and open society, an objective that we can safely pursue to our own benefit, whereas the Chinese cannot.

This article, Cracks in the Great Wall-Part One: The CCP at 100 Years, was originally published by the American Institute for Economic Research and appears here with permission. Please support their efforts.