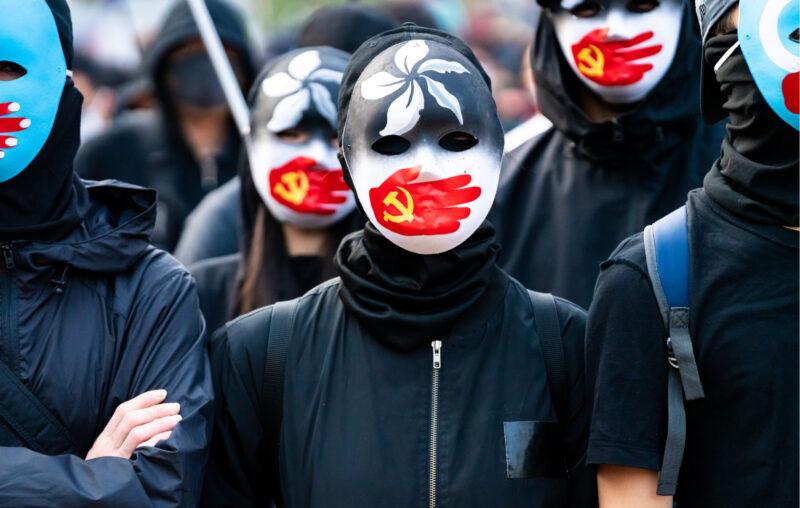 One of China’s core strategies that dates back to the Warring States period that predated the first imperial dynasty is the use of deception and non-confrontation to quietly rise in power until it’s too late. Its rough English translation is to not ask the emperor the weight of his cauldrons, which essentially outlines the necessity to not declare your ambitions early on. The contemporary name for the idea is “hide and bide.”

From a basic strategic sense, that means being patient, gathering your strength, building your connections, weakening your enemy slowly, and perhaps even getting to a point where it is too late to resist. That has been contemporary China’s strategy since the tenure of former chairman Deng Xiaoping, a charm offensive against the West, promises of trade and development for neighboring countries, and a facade of backing the rules-based international order.

They hoped, presumably by 2049 (a symbolic 100 years after the founding of Communist China), that they would have become so economically influential, their military so powerful, and their international standing so respected that they could then declare their true intentions and nobody would be able to resist. The current president Xi Jinping has departed from this strategy, perhaps too early, as he has been highly vocal about China’s ambitions on the world stage.

The Basics of China’s Charm Offensive

The Chinese have been masters of employing soft power while slowly growing their military to push out into new territory. One emblematic example would be China’s growing military activity in the disputed South China Sea, an area where a handful of countries lay claim to and a critical global trade chokepoint. In recent years, China has been making aggressive demands on countries in the region whether it be Vietnam, the Philippines, or Indonesia.

They have also been building legally dubious military facilities in the region. If China tried doing this too early, they would have likely set off alarm bells and its military would have been too weak. Today with its newfound strength, supported by decades of globalization, it can now afford to conduct itself in such a manner and its competitors don’t really know how to respond.

Another example of China’s charm offensive would be its trade with the West. Although this should not be seen as an endorsement of the Trump Administration’s disastrous trade war, there is no doubt that doing business with Western companies plays a key role in their foreign policy. In particular, it allows them access to their domestic market and then demands that they serve the interests of the CCP. Professor David Jacobson from the Cox School of Business at Southern Methodist University writes,

This is not just an abstract hypothetical. China has already done this, very recently in fact, with Standard Chartered and HSBC, two British banks with operations in Hong Kong and the mainland. Beijing gave the ultimatum that if they did not publicly express support for the national security law in Hong Kong they would lose the right to continue doing business in China. Both banks complied in a move criticized by the international community. But Beijing didn’t stop there. They also demanded that both companies crackdown (sic) on clients who had ties to the pro-democracy movement in Hong Kong. The banks complied with this, as well.

We have seen similar tactics employed on US companies, as in the case of China’s pressure on the NBA to silence conversations about the 2019 protests in Hong Kong and Disney’s latest Mulan movie filmed in China. The CCP has also been wining and dining leaders in South America and Europe in order to garner more sympathy for their objectives.

Latin America is particularly vulnerable because they do not have the economic capacity to resist Chinese demands. This is how China convinced a number of countries such as El Salvador, the Dominican Republic, and Panama to sever their relations with Taiwan in favor of receiving infrastructure investments from Beijing.

The Belt and Road Initiative is another example of a massive infrastructure project to garner economic influence, which is planned to stretch all the way to Europe. All countries involved in the project will receive exclusive benefits and investments to better their own economies. This, of course, may come with serious infringements on their sovereignty to be realized later.

It is undeniable that this strategy has worked well for the Chinese for the past few decades, especially in recent years where they now have the power to make aggressive demands. They bided their time, grew their influence, and now that they have the power they need they are starting to flex it.

Did the Chinese Play Their Hand Too Early?

It’s entirely possible that the Chinese may have overestimated their capabilities when it came to how willing the world would be to resist. It’s also possible that they understood that the trends regarding the spread of ideas like human rights and freedom warranted a crackdown domestically and abroad earlier than later. Perhaps it’s a mixture of both.

The recent dissolution of Hong Kong’s democratic freedoms is a representative example of this dilemma. For context, Hong Kong was returned to the Chinese by the British in 1997 after more than 150 years of English colonial rule. As a result, it had unique freedoms and norms that the Chinese promised to respect in the one country, two systems model. This led the city-state to become extremely prosperous as it enjoyed some of the highest levels of economic freedom in the world, with decent civil liberties. However, this also led to strong desires for independence, greater levels of democracy, and an overall distrust of Beijing, which culminated in a number of protests against the CCP. In particular, vigils for the Tiananmen Square Massacre were held in Hong Kong every year, which is extremely censored on the mainland.

This created an obvious dilemma because this behavior had the potential to spread into the mainland. This culminated in the Hong Kong Security Law in 2019 which dissolved most of the city’s autonomy and civil freedoms, which understandably led to massive protests and an equally massive crackdown that shocked the world. It shattered any notion of a peaceful unification with Taiwan, which the Chinese hoped they would be able to accomplish through economic and political maneuvering.

Hong Kong can certainly be viewed as a figurative example of the end of China’s charm offensive and how the world is reacting. Another example would be the now stagnant Belt and Road Initiative to which countries are far more skeptical of cooperating. Their skepticism is not unwarranted,as working with Beijing on this project came loaded with potential infringements on sovereignty, crippling debt, and economic devastation as Chinese excess capacity floods fragile domestic markets.

In short, the CCP has transitioned to its next step of exerting its will abroad. The world is not happy and the image of a benevolent and well-behaved China is over.

The World is Awake

In just a few short years, China has gone from an emerging nation with exciting opportunities to public enemy number one. Europe has become far more hawkish and hesitant to deal with China. In the United States, confronting China is one of the few bipartisan issues. In Asia, there is an emerging consensus from Japan, to India, to Vietnam, and even down to Australia, that China is a problem. Although the best way to contain the CCP’s authoritarian ambitions is still up for debate, especially because every country has its own interests and priorities, few can seriously claim Beijing’s intentions for the world are benevolent.

Businesses that wish to have ties with China now think twice, having to balance market access on one hand and popular blowback on the other.

It is clear that the CCP’s strategy of hiding and biding has come to an end. Perhaps they believed that resistance wouldn’t be as stiff as it was, and perhaps they needed to take action to protect their hold on power. Perhaps it’s a mix of both.

At the end of the day, Beijing has awoken the global community to its true nature and given everyone a taste of what a hegemonic China would be like. It would be safe to say that the world’s honeymoon phase with China is over and the pathway forward will see far more resistance to their ambitions. It seems like the CCP has overplayed its hand and it wouldn’t be absurd to think they know that as well.

This article, Cracks In the Great Wall Part 3 – China’s Charm Has Expired, was originally published by the American Institute for Economic Research and appears here with permission. Please support their efforts.