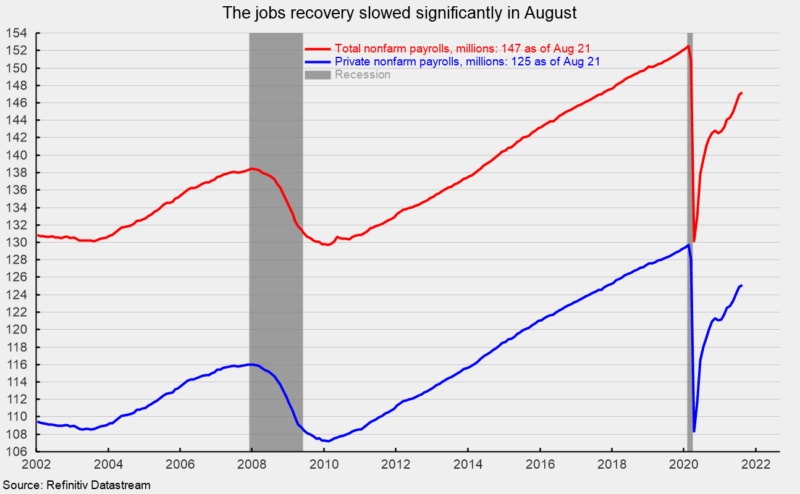 Weakness in August was concentrated in the Retail industry and Leisure and Hospitality industry. Within the 243,000 gain in private payrolls, private services added 203,000 while goods-producing industries added 40,000 versus a monthly average of 585,500 over the prior six months for services and 36,667 for goods.

Within private service-producing industries, Retail lost 28,500 jobs in August, the third decline in the last five months while leisure and hospitality was unchanged for the month after adding 415,000 in July and an average of 349,833 per month over the prior six months. Among other service industries, business and professional services added 74,000 in August, transportation and warehousing gained 53,000, and education and health care services increased by 35,000 (see second chart).

After 16 months of recovery, only one of the major private industry groups has more employees than before the government lockdowns – transportation and warehousing. Two industries – Leisure and hospitality (down 917,000 jobs), education and health services (down 687,000) – are down more than half a million jobs each (see third chart).

On a percentage basis, the losses are more evenly distributed. Three of the 14 private industries shown in the report have declines of 5 percent or more since February 2020. Leisure and hospitality leads with a 10.0 percent drop since February 2020, mining and logging comes in second with a 6.7 percent loss followed by information services at 5.1 percent. For the labor market as a whole, total nonfarm payrolls and private payrolls are down 3.5 percent since February 2020 (see fourth chart).

The average workweek was unchanged at 34.7 hours in August. Combining payrolls with hourly earnings and hours worked, the index of aggregate weekly payrolls gained 0.8 percent in August. The index is up 9.7 percent from a year ago.

The August jobs report posted a disappointing gain of 235,000 in August. Private payrolls were slightly better at 243,000 but both are well below the monthly average over the prior six months. Retail and leisure and hospitality were the primary reasons for the disappointment in August and both are likely a result of the resurgence of new Covid cases. Despite the eight consecutive monthly gains and 15 increases in the last 16 months, payroll employment remains well below peak measures from before the pandemic.

Rising Covid cases and falling consumer confidence are boosting the risks for the economic outlook. A consumer retrenchment would hinder the recovery though the damage will be far less than the carnage caused by widespread lockdowns.

Furthermore, ongoing materials shortages, logistical and transportation bottlenecks, and labor issues in the manufacturing sector continue to restrain the ability of supply to recover as quickly as demand, resulting in significant upward pressure on prices. Overall, the outlook is for continued recovery but the threats and headwinds to growth have increased substantially.

This article, Covid Resurgence Hurts Recovery in Employment, was originally published by the American Institute for Economic Research and appears here with permission. Please support their efforts.