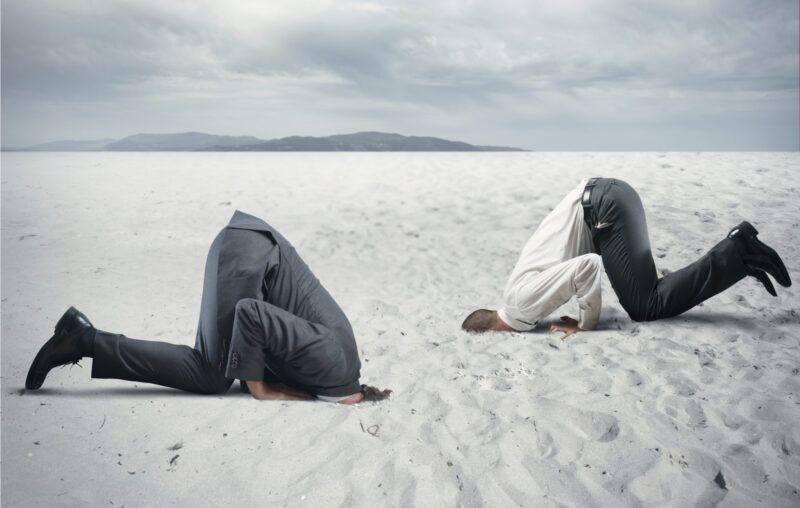 Federal agencies don’t count what politicians don’t want to know. President Joe Biden and other Democrats perennially invoke “science and data” to sanctify all their COVID-19 mandates and policies. But the same shenanigans and willful omissions that have characterized COVID data have perennially permeated other federal programs.

The rule of experts?

During his update on his Winter COVID Campaign in December, President Biden declared, “Almost everyone who has died from COVID-19 in the past many months has been unvaccinated.” This was true from the start of the pandemic in early 2020 until the vaccines’ efficacy began failing badly in recent months. Oregon officially classifies roughly a quarter of its COVID fatalities since August as “vaccine breakthrough deaths.” In Illinois, roughly 30 percent of COVID fatalities have occurred among fully vaccinated individuals. According to the Vermont Department of Health, “Half of the [COVID] deaths in August were breakthrough cases. Almost three-quarters of them in September were,” as Burlington, Vermont, TV station WCAX summarized.

The Biden administration guaranteed that the vast majority of “breakthrough” infections would not be counted when the Centers for Disease Control in May ceased keeping track of “breakthrough” infections unless they resulted in hospitalization or death. Ignoring that data permitted Biden to go on CNN in July and make the ludicrously false assertion: “You’re not going to get COVID if you have these vaccinations.” But federal data on fully vaxxed COVID fatalities is far flimsier and less reliable than the numbers compiled by some states. Biden’s attempt to define vaccine failure out of existence collapsed spectacularly with the arrival of the omicron variant in December, producing record numbers of COVID cases.

The same policymakers who claim to be guided by data have little or no idea how many Americans have been hit by COVID. According to CDC, there had been 51,115,304 COVID cases in America through mid-December. But a different CDC web page estimates that there had been 146.6 million COVID infections in the United States as of October 2, 2021. That CDC analysis estimated that only one in four COVID infections have been reported, which would mean that, based on the latest official case numbers, more than 200 million Americans have contracted COVID. For Biden policymakers, a potential error of 150 million COVID infections is “close enough for government work.” Relying on the lower number is convenient for policymakers who want to continue ignoring the natural immunity acquired by 199 million Americans who survived COVID infections.

Deceptive federal COVID data is not an anomaly. The same charades permeate the official data guiding both domestic and foreign policies.

The dumbing down of education

Federal education policy has perennially been exempt from the fraud penalties that the Federal Trade Commission inflicts on private corporations. The No Child Left Behind Act, passed in 2002, promised that federal mandates would make all students proficient in reading and math by the year 2014. NCLB was spurred in part by Washington’s exasperation with decades of coverups of local and state school failures. School test data had been manipulated to allow “all 50 state education agencies to report above-average scores for their elementary schools, with most claiming such scores in every subject area and every grade level,” as former Education Department official Larry Uzzell explained. NCLB promised to prevent state and local politicians and bureaucrats from lying to coverup kids’ educational shortfalls.

Aside from mandating universal proficiency by 2014, NCLB also required schools to show “adequate yearly progress” for all groups of students. But states were allowed to define “proficient” and set the starting line for measuring progress wherever they pleased. Almost half the states responded to the law’s perverse incentives by “dumbing down” academic standards, lowering passing scores on tests to avoid harsh federal sanctions. A 2006 report by Education Sector, a nonprofit organization, derided NCLB for creating “a system of perverse incentives that rewards state education officials who misrepresent reality.” It was obvious within the first year that the law was backfiring, but the feds covered up the catastrophe to permit President George W. Bush and other politicians to continue lying about saving America’s children. In 2009, Obama’s Education Secretary Arne Duncan denounced the pervasive manipulations spawned by NCLB: “Far too many states dummied down standards. They reduced their standards, and we’re actually lying to children and families and saying they are prepared to be successful, when frankly they weren’t even close. It’s one of the most insidious things that happened.”

Food stamps have been one of the most popular ways for politicians to prove their love of downtrodden Americans. Liberals perennially claim that the food-stamp program has a fraud rate of only 1 percent. But that is based solely on the number of violators who get caught, and federal rules discourage states (which administer the program) from vigorously pursuing violators. New Mexico Human Services Secretary Sidonie Squier complained in 2013 that the biggest fraud issue in her state was recipients’ selling their food-stamp Electronic Benefit (EBT) Card and claiming that it was lost or stolen. Roughly 70 percent of all the EBT cards issued in New Mexico in 2012 were replacement cards. Squier told Albuquerque’s KOB-TV, “We know that there are some people who lose them four, six, or eight times, and it’s pretty suspicious, but you can’t do anything about it based on the federal rules. They want people to have the cards — they want the card replaced.”

The Milwaukee Journal Sentinel revealed that Wisconsin food-stamp recipients routinely sell their benefit cards on Facebook. The investigation found that “nearly 2,000 recipients claimed they lost their card six or more times in 2010 and requested replacements.” USDA rules require that lost cards be speedily replaced. The Wisconsin Policy Research Institute concluded: “Prosecutors have simply stopped prosecuting the vast majority of [food-stamp] fraud cases in virtually all counties, including the one with the most recipients, Milwaukee.” The Obama administration responded by cracking down on state governments’ antifraud measures. Refusing to detect fraud permits politicians to claim there is no fraud — the ultimate scam on taxpayers forced to pay for the shenanigans.

The fraud of job training

Since the 1960s, politicians have promised that government training programs would provide people with valuable skills. Instead, the programs have generated endless statistical scams. One of the first federal training programs claimed that any trainee who held a job for a single day was “permanently employed.” The Job Corps went one step further, counting as a job placement any recruit who had a job interview scheduled. In the 1980s, some federal job training programs had a 100 percent success rate because they pretended that anyone who was not hired post-training never existed. A federal audit revealed in 2014 that the U.S. Labor Department did not even bother tracking whether trainees completed training — much less whether they actually became employed in the field for which they were trained. The Government Accountability Office “found training-related employment data unreliable primarily because a significant portion of the data was missing.” Program managers excused themselves by stating that tracking the outcome of training was “resource-intensive.” President Obama admitted in 2014 that federal job training programs rely on a “‘train and pray’ approach. We train them, and we pray that they can get a job.”

The Peace Corps, one of the most sainted federal agencies, is also guilty of perennially covering up deadly risks to its recruits. The Peace Corps has long acted as if its volunteers’ good intentions are body armor that shield them against all perils. But its basic model — sending inexperienced young college graduates to live and work alone in many of the world’s most dangerous nations — is failing mightily. The Peace Corps routinely buries evidence of rapes suffered by its volunteers. Michael O’Neill, the Peace Corps’ security director from 1995 to 2002, commented, “Nobody wanted to talk about security [for volunteers]. It suppresses the recruitment numbers.” After a 29-year-old volunteer was gang-raped in Bangladesh, Rep. Ted Poe (R-Tex.) condemned the agency’s reaction: “For political reasons, the Peace Corps did everything it could to ignore and cover up the dastardly deed, blaming the crime on the victim.” A 2021 USA Today investigation found that the agency continues suppressing evidence even though almost half of the female Peace Corps recruits “who finished service in 2019 were sexually assaulted in some way.” But this horrendous failure rarely shows up in the agency’s endless press release victory proclamations.

The first casualty of war is truth

Federal statistics cannot raise the dead, but they can make troublesome corpses vanish. The Obama administration vastly increased drone killings of terrorist suspects in many nations and claimed that almost all the victims were bad guys. A Salon analysis, summarizing an NBC News report, noted, “Even while admitting that the identities of many killed by drones were not known, the CIA documents asserted that all those dead were enemy combatants. The logic is twisted: If we kill you, then you were an enemy combatant.”

The New York Times revealed that U.S. “counterterrorism officials insist … people in an area of known terrorist activity … are probably up to no good.” The “probably up to no good” standard absolved almost any drone killing within thousands of square miles in Pakistan, Yemen, and Somalia. Daniel Hale, a former Air Force intelligence analyst, leaked information revealing that nearly 90 percent of people who were killed in drone strikes were not the intended targets. Biden’s Justice Department responded by coercing Hale into pleading guilty to “retention and transmission of national security information.”

Anyone who is shocked at the chicanery of official statistics on drone killings should take a look at the Vietnam War, during which the U.S. military created incentives that guaranteed the killing of vast numbers of innocent people. In 1974, the Army published a monograph entitled “Sharpening the Combat Edge: The Use of Analysis to Reinforce Military Judgment.” Deborah Nelson, the author of The War Behind Me: Vietnam Veterans Confront the Truth About U.S. War Crimes, summarized the study: “They measured success through an elaborate analysis based largely on enemy body count. Statistics on kills per month, kills per unit, kills per engagement, even rounds expended per kill were collected at the division headquarters to determine what strategies were working and which units were lagging and in need of a ‘visit.’” Ret. Lt. Gen. Orwin Talbott observed, “The 9th division insisted on a body count. They didn’t care what body.” There was far more enthusiasm for wracking up body counts than for assuring that the targets were actually enemies. The more that kill ratios determined officers’ promotions, the easier it was to justify treating almost all Vietnamese as enemies. Decades later, Vietnam vet Jerry Mooradian lamented: “The soldier on the ground had to come up with a body count to get to people in Washington so they could justify being there.” Those bogus “body counts” permitted Defense Secretary William McNamara and other honchos to claim that the United States was winning the war.

Political appointees at federal agencies recognize that the best way to protect their bosses’ reputations is to avoid gathering the data that would expose their skullduggery. The refusal to track program failures is buttressed by pervasive secrecy. Federal agencies classify as secret trillions of pages of documents a year — a magic wand that vanishes far more scandals than are ever exposed.

Since the start of the COVID-19 pandemic, the media has portrayed federal officials like Tony Fauci as America’s “best and brightest.” But Washington, D.C., is full of Towers of Paternalist Babel built on statistical quicksand. Bureaucracies conspire against admitting their failures, and politicians often rig reporting requirements to hide the damage their laws inflict. Anyone who has blind faith in federal data is unfit to judge public policy in the real world.