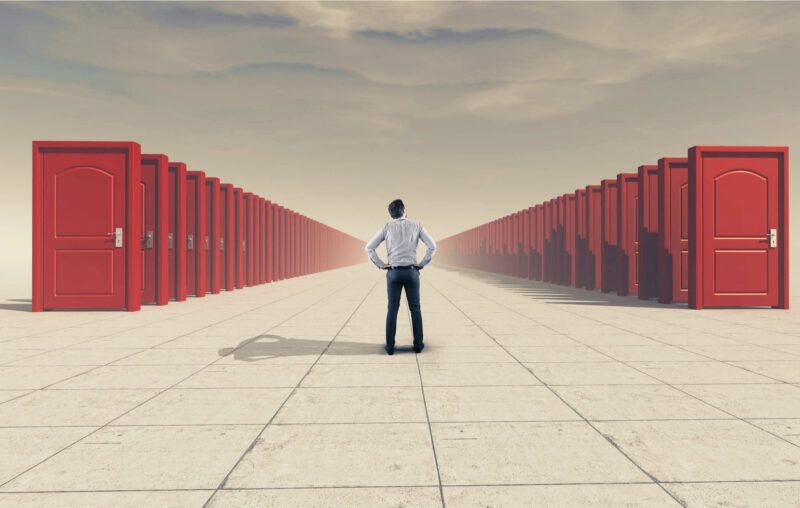 Traditionally, the Fed adhered to a corridor operating system for managing interest rates and the money supply. This meant that the Fed attempted to set both upper and lower limits for a target interest rate. The interest rate targeted for this purpose was the Federal Funds rate, the interest rate Federal Reserve member banks charge each other for overnight loans. These loans are very low risk, because the loans expire in two weeks or less, and the money never leaves the Federal Reserve Bank where the reserves are held. These very short-term loans are called overnight loans, though they can extend up to two weeks, and can be rolled over indefinitely. The short duration of these loans helps minimize the risk to the lending banks.

Figure 1 also shows that after 2008, when the Fed adopted a floor operating system, the Federal Funds rate hovered closely to the interest paid on reserves. The Fed initially paid a higher rate on required reserves in 2008, but almost immediately started paying the same rate on required and excess reserves. This helped banks stay profitable while avoiding the risk of lending in the Great Recession’s uncertain environment, and because it kept banks from lending, it also contributed to controlling and deleveraging the money supply. However, this big, systematic reduction in risk exposure came at a price—there was far less money available to finance the investment needed for recovery from the Great Recession.

Banks hold reserves to meet their regulatory reserve requirement, to keep funds available for settling transactions, and as a buffer against market volatility. Banks also hold reserves as an alternative to lending—although lending can and generally does pay the bank significantly higher interest, lending is always far riskier than merely holding reserves. Banks will hold reserves when they cannot find enough acceptable, credit-worthy borrowers. In this connection, it may be helpful to consider that bankers’ perception of borrowers’ creditworthiness is as inaccurately overoptimistic during the unsustainable boom before a recession, as it is equally inaccurately overpessimistic during the recession.

Banks’ demand for reserve balances is measured in dollars of reserve holdings ($) on the horizontal axis, represented as a function of the interest rate (r) on the vertical axis. Figure 2 also shows the discount rate (d) and the interest the Fed pays on reserve balances (IORB). As bank reserves grow, the stock out of which Federal Funds lending can be made increases—practically riskless, short-term, overnight loans made by one Federal Reserve member bank to another—the Federal Funds rate falls, though it falls very rapidly in a steep, inelastic region of the demand curve for reserve balances, until it falls to a flatter, more elastic region at lower interest rates (Figure 2).

As long as reserves remain relatively scarce, reserve demand is interest-inelastic, and lowering interest rates will not get banks to hold much more in reserves, but once interest rates fall enough, reserve demand becomes elastic—that is, more responsive to changes in interest rates—and banks want to hold significantly more as the interest rate falls in this region of elastic demand. In the low-interest/flat-demand region of the reserve demand curve, the low interest banks could earn by lending reserves is less attractive, and insufficient to keep them from holding higher reserve balances. This makes the economy safer, less leveraged, but because fewer investment projects will be financed in this environment, it also reduces economic growth.

The Fed operated according to a corridor system until October 2008. The target Federal Funds rate was set in the steep, inelastic part of the reserve demand curve, between upper and lower bounds set by the discount rate and interest on reserve balances (IORB). The upper and lower bounds constitute the corridor which encloses the target Federal Funds rate. Before the Fed paid interest on reserve balances, the lower bound was zero.

Figure 3 shows how a corridor system works. The Fed uses open market purchases and sales of Treasury securities to supply reserves inelastically at a level that will influence the Federal Funds rate to adjust toward the interest rate target the Fed chooses. The Fed adopted a floor system in October 2008 during the Great Recession. Many banks held substantial parts of their portfolios in speculative and ultimately worthless financial derivatives and mortgage-backed securities, and were facing bankruptcy, and indeed several large banks and financial services firms did go bankrupt and had to be taken over by healthier ones.

In the turmoil of the Great Recession, the cost of holding high levels of reserves was more than offset for the banks by avoiding default risk, which is always higher during a recession than it seemed before. This effect seems to be amplified by subjective perceptions, as decision makers, investors, firms, and banks, all overoptimistic before a recession, suddenly become starkly overpessimistic as soon as the economy goes into recession. To operate a floor system, the Fed sets the IORB rate close to the target Federal Funds rate.

Under a floor system reserve balances will be much higher, because the banking system is operating in the elastic region of the reserve demand curve (Figure 4). Higher reserve holdings are one desirable feature of a floor system, especially since the 2007-2009 Great Recession. Because banks earn interest on all of their holdings under a floor system, this feature also contributes to keeping banks solvent and functioning.

One more feature of a floor system is that reserve balances can fluctuate substantially in the elastic region of the reserve demand curve, without influencing interest rates too much. Although the Fed’s and the banks’ balance sheets have ballooned since the Great Recession, these reserves are less leveraged than they had been under the corridor system, because the IORB interest rate enables banks to earn income without lending. This limits the financial sector’s risk exposure, a keenly felt need during the recession, but also prevents financing productive investment needed for recovery and growth. This helps us understand how bank reserves could increase from less than $50 billion in 2008 to nearly $4 trillion today without triggering hyperinflation. Nevertheless, the fact that reserves are less leveraged under a floor system seems to have given cover to unaccountable monetary expansion.

This article, Corridor Versus Floor Operating Systems, was originally published by the American Institute for Economic Research and appears here with permission. Please support their efforts.