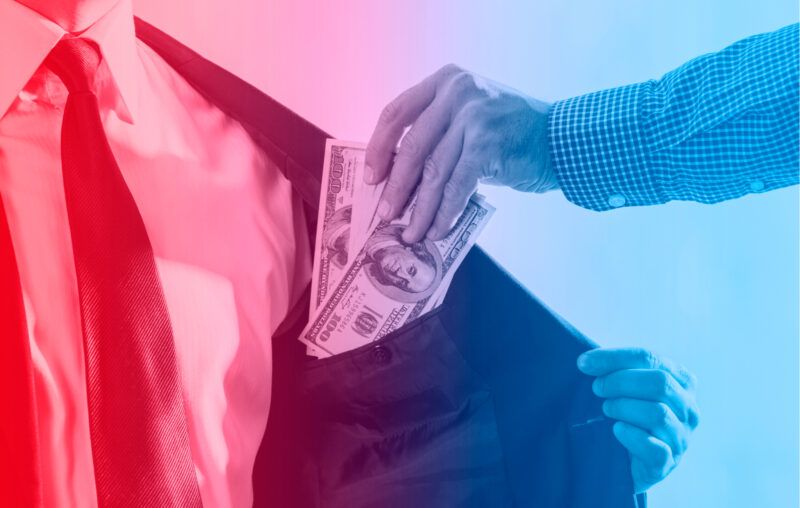 “They may hate democratic socialism because it benefits working people, but they absolutely love corporate socialism that enriches Trump and other billionaires.”

It is fashionable for politicians like Senator Sanders to point to corporations as beneficiaries of socialist government policies. To their credit, they are correct. So what is corporate socialism?

In their excellent book Multilateral Disarmament: A State Compact to End Corporate Welfare, Byron Schlomach, Stephen Slivinski, and James M. Hohman provide a fairly complete definition, defining corporate welfare (or corporate socialism) as, “any financial benefit purposely granted by government to a specific business or class of businesses and that is not generally available to all businesses and taxpayers.”

And why corporate welfare, or cronyism if you prefer? The label fits because the market is no longer allowed to fully integrate prices and fairly reward or punish companies. In the cronyism model, these decisions are made by a central planner in accord with their own particular interests.

Politicians routinely engage in doling out corporate welfare, mostly because they are incentivized to do so. Corporations are significant political donors and maintain large lobbying offices, for the sole purpose of extracting as many “rents” as they can from government officials. Politicians want to stay in power, which necessitates keeping their largest donors happy, and so the cycle continues.

Further, politicians want to claim they are “creating jobs” via policy, and the practice of corporate welfare makes this easy. Who doesn’t want to tout responsibility for the new Amazon factory in town?

To make things more complicated, corporate welfare itself is sometimes hard to spot. It masquerades under slogans such as “helping our farmers,” or “providing financial security to ordinary Americans.” If gathering basic information about political candidates is too costly for the average voter, there are even less incentives to critically examine “nice-sounding” corporate welfare programs.

Moreover, there always seems to be more pressing problems in the newscycle than identifying or covering acts of corporate welfare, from massively important international issues around Covid-19 or Afghanistan, to even more mundane but oh so fascinating celebrity and/or political gossip. And even if we were to find the time to identify and pay attention to acts of corporate welfare, we are told the policies in question are indeed in our best interest, and (to quote the Borg), “resistance is futile” simply because it is costly. The marginal cost of resistance via some means of protest is almost always too high to make it worth it.

Real-life examples of corporate welfare abound. From cities providing tax breaks to lure in big business, to massive farm subsidies, competition stifling regulations, or financial regulations that create perverse incentives in our banking system, we are all affected in some way by the practice of corporate welfare.

If corporate welfare is so widespread, we must ask ourselves: Are the benefits worth the costs?

Given that the revenue source for corporate welfare comes from our pockets, this question is especially pertinent. And if corporate welfare is not worth it, and is in fact a drain on the lives of everyday Americans, reforms are worth pursuing. To effectively pursue reform, we need a roadmap, lest we waste valuable time and resources pushing back against entities with much more power than what we could muster.

This is where Corporate Welfare, Where’s the Outrage? a brilliant new documentary narrated by Johan Norberg and produced by the Free to Choose Network, comes in. Reminiscent of the late Anthony Bourdain, Norberg takes us to the real America, interviewing residents of communities from Baton Rouge, Louisiana to Wabash County, Indiana. In each community Norberg visits, he allows local residents to explain how corporate welfare impacts their lives. The documentary also includes additional commentary from economists such as Veronique de Rugy to highlight the costs of corporate welfare on everyday Americans.

The hour-long film finds a way to be both heartbreaking and uplifting. Its premise is that corporations, though important actors in our economy, should not receive special treatment. Through real-life examples, the documentary shows that corporate welfare is crony capitalism, and it is fundamentally opposed to laissez-faire.

The documentary begins in Baton Rouge, Louisiana, a city with local poverty and massive foreign investment. In Baton Rouge, the Industrial Tax Exemption Program (ITEP) provides corporations such as ExxonMobil with large tax exemptions in order to make the region more appealing. The program began in the 1930s with the intention of providing companies with tax benefits for a select period of time. However, like most government programs, it has not changed for almost 80 years, and companies have become dependent on the tax breaks.

ITEP describes itself as necessary for economic development, while locals see it as a way for corporations to avoid paying taxes. In Louisiana, ITEP benefits were decided directly by the State Board of Commerce and Industry, which rubber-stamped applications from large corporations.

While walking around Baton Rouge, Norberg speaks with members from community groups such as Together Baton Rouge, who were able to raise awareness of the ITEP process. This ultimately led to Baton Rouge Mayor Sharon Weston Broome signing an executive order creating a committee process to review ITEP applications, after Louisiana Governor John Bel Edwards reformed the program to provide locals a say in the application process.

As a result of the reforms, local representatives now decide who gets ITEP benefits. They are no longer pushed through by an unelected board of commerce. The results of local activism in Baton Rouge are encouraging. While activism and reform is challenging, social media campaigns can help individuals raise awareness about the costs of corporate welfare, which may spur policy reform. In a world of outlandish fiscal deficits, this concept may seem odd, but tax dollars are our money, and we should do our best to ensure they are both raised and spent in a fair and prudent manner.

Moving from Baton Rouge, the documentary takes the viewer to Chicago for a review of Tax Increment Financing (TIF), and the Economic Development Growth Engines (EDGE) program in Memphis. It also highlights the effects of corporate welfare at the federal level, focusing on farming subsidies which actually harm local farming, and regulations that stifle competition.

In addition to corporate welfare, the film demonstrates the positive effects of industry level deregulation through the lens of Carl Smith, an independent trucking owner/operator. Prior to 1983, Carl could not operate independently as a trucker due to strict regulations that kept entrenched trucking companies in place, with prices and routes set by the government. After the industry was deregulated, Carl bought his first truck and embarked on a successful career.

Following Carl’s powerful story, the documentary features an important explanation of the 2008 financial crisis by BB&T CEO John Allison, who details how financial regulations and policies both created and exacerbated the crisis.

So are the benefits worth the costs? In example after example, the documentary highlights that despite some limited benefits such as direct employment, the majority of corporate welfare policies appear to remove resources from local populations and via cronyism, politicians try to insulate themselves from the loss of those benefits by removing community members from the decision process.

This article, Corporate Welfare, Where’s the Outrage? A Review, was originally published by the American Institute for Economic Research and appears here with permission. Please support their efforts.