Consumers’ Views of the Economy Fell in September 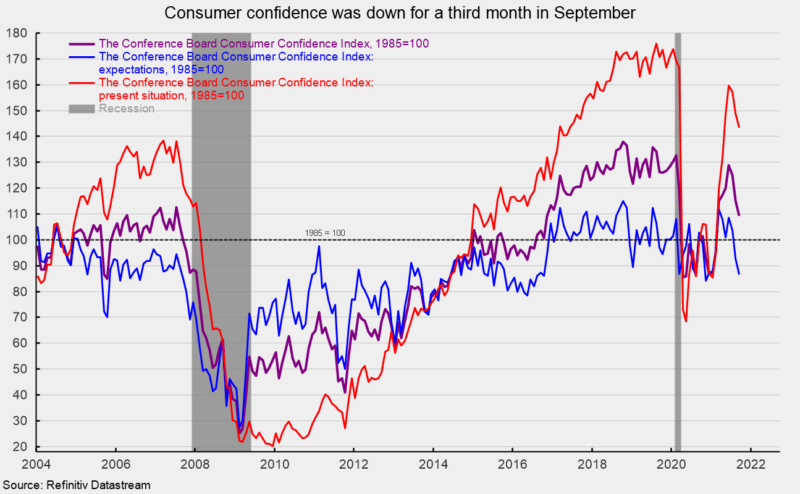 The Consumer Confidence Index from The Conference Board fell again in September, falling 5.9 points or 5.1 percent to 109.3. September was the third decline in a row and puts the index 19.6 points below the June 2021 peak (see first chart). From a year ago, the index is up 8 points or 7.9 percent.

Both major components of the index fell for the month. The present-situation component decreased 5.5 points to 143.4 while the expectations component lost 6.2 points, taking it to 86.6 (see first chart). The details of the report suggest that consumers have become less optimistic about current economic conditions as well as future growth prospects.

According to the report, “Concerns about the state of the economy and short-term growth prospects deepened, while spending intentions for homes, autos, and major appliances all retreated again.” The report adds, “Consumer confidence is still high by historical levels—enough to support further growth in the near-term—but the Index has now fallen 19.6 points from the recent peak of 128.9 reached in June. These back-to-back declines suggest consumers have grown more cautious and are likely to curtail spending going forward.”

Expectations for future income deteriorated as well with 17.3 percent expecting an increase, down from 18.2 in August, while 11.5 percent expect a decrease, up from 9.9 in August. Those results put the net percentage expecting an increase at 5.8 percent, down 2.5 points from 8.3 in August (see bottom of second chart). As noted earlier, future buying plans softened as percentages for buying a home, auto, or major appliance all fell in the latest month.

Consumers are growing more concerned about economic conditions and growth prospects, largely due to the recent surge in new Covid cases. While the outlook is for continued expansion, uncertainty remains elevated. Lingering effects of the pandemic including shortages of materials, labor difficulties and logistical problems are sustaining upward pressure on prices as demand outpaces restrained supply. Repeated waves of new Covid cases could disrupt economic activity in the future.

This article, Consumers’ Views of the Economy Fell in September, was originally published by the American Institute for Economic Research and appears here with permission. Please support their efforts.