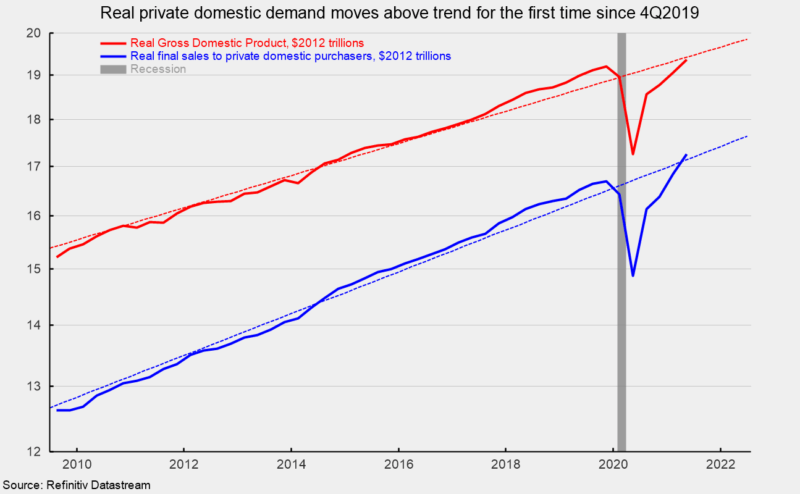 Business fixed investment increased at an 8.0 percent annualized rate in the second quarter of 2021, contributing 1.1 percentage points to final growth. That gain was led by a 13.0 percent jump in spending on equipment (adding 0.7 points to growth) and a 10.7 percent gain in intellectual-property investment (adding 0.5 percentage points). Those gains were partially offset by a decline in spending on business structures where spending fell at a 7.0 percent rate, the sixth decline in over the last seven quarters, and subtracting 0.2 percentage points from final growth (see second chart).

Residential investment, or housing, fell at a 9.8 percent annual rate in the second quarter compared to a 13.3 annualized gain in the prior quarter. The second quarter is just the second decline in the last 10 quarters (the other being the second quarter of 2020 during the height of government lockdowns). The drop in the second quarter reduced overall growth by 0.5 percentage points (see second chart). Housing had shown resilience throughout the pandemic as extremely low interest rates combined with widespread remote working policies and the desire by some people to move away from virus epicenters has supported increased demand. However, limited supply and surging home prices are pushing buyers out of the market and leading to a cooling.

Businesses liquidated inventory at a $165.9 billion annual rate (in real terms) in the second quarter versus liquidation at a $88.3 billion rate in the fourth quarter, subtracting 1.1 percentage points from second-quarter growth.

Government spending fell at a 1.5 percent annualized rate in the second quarter compared to a 4.2 percent pace of growth in the first quarter, subtracting 0.3 percentage points from growth.

While there is significant concern being expressed about the potential for a sustained surge in consumer price increases, there are still major distortions in prices and the financial system resulting from government policies, disruptions to supply chains, and changes to consumer spending habits. Since many of these distortions are likely to be temporary, a 1970s-style resurgence in persistent consumer price increases remains unlikely.

The U.S. economy suffered a historic contraction in 2020 as government shutdowns intended to fight the Covid-19 outbreak sent economic activity plunging and unemployment soaring. Reopening has spurred a historic rebound and aggregate measures show output is back to trend-growth levels. The preponderance of evidence suggests the economy is on a sustainable upward path. However, the recent acceleration in new Covid cases caused by the Delta variant is increasing uncertainty for the short-term outlook. Other lingering fallouts such as materials shortages, labor constraints, and logistical problems are driving prices higher, but these are likely to be temporary. Under current conditions (still elevated unemployment, robust activity, and accelerating consumer price increases), monetary policy is likely to remain accommodative though somewhat less so as Federal Reserve members recently suggested that bond-buying programs may be tapered starting later in 2021. Still, the outlook remains tilted to the upside, but uncertainty remains elevated.

This article, Consumer Spending Drives Economic Recovery in the Second Quarter, was originally published by the American Institute for Economic Research and appears here with permission. Please support their efforts.