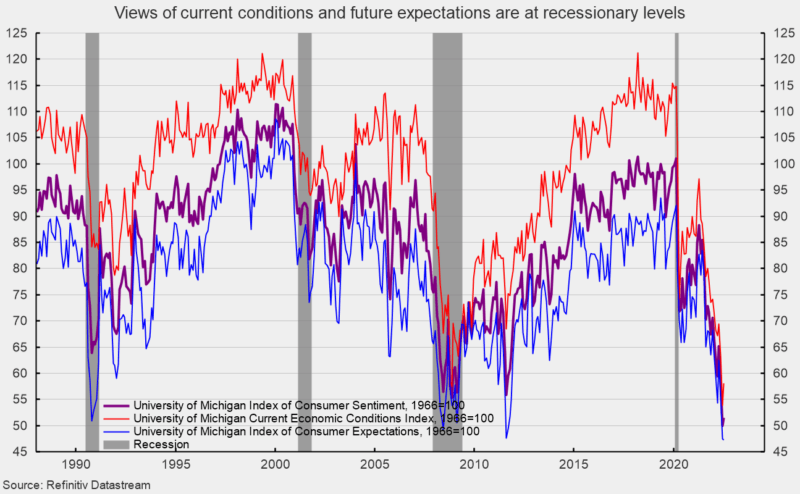 The final July results from the University of Michigan Surveys of Consumers show overall consumer sentiment remained near record lows (see first chart). The composite consumer sentiment increased to 51.5 in late July, up from the record low 50.0 in June, a rise of 1.5 points or 3.0 percent. The index is consistent with prior recessions.

The current-economic-conditions index rose to 58.1 from the record-low 53.8 in June (see first chart). That is a 4.3-point or 8.0 percent increase for the month. The index is slightly above the record low but remains consistent with prior recessions.

The second sub-index — that of consumer expectations, one of the AIER leading indicators — lost 0.2 points or 0.4 percent for the month, dropping to 47.3 (see first chart). The index is at its lowest level since May 1980.

According to the report, “The final July reading showed little change in consumer sentiment from its historic low in June. The one-year economic outlook fell to its lowest reading since 2009.” The report goes on to add, “At the same time, concerns over global factors have eased somewhat. This easing provided some limited support to buying conditions for durables, which remained near the all-time low reached last month, as well as a modest retreat in long run inflation expectations.”

The one-year inflation expectations fell to 5.2 percent as of late July. That is the second decline in the last three months since hitting back-to-back readings of 5.4 percent in March and April. The one-year expectations has spiked above 3.5 percent several times since 2005, only to fall back (see second chart).

The five-year inflation expectations came in at 2.9 percent in late July. That result is the lowest reading since December 2021, leaving it near the mid-point of the 25-year range of 2.2 percent to 3.5 percent (see second chart).

The report states, “This month’s Sentiment Index was the second lowest reading on record, and the Q2 slowdown in personal consumption expenditures was no surprise.”

The plunge in consumer attitudes reflects a confluence of events with inflation leading the pack. Persistently elevated rates of price increases affect consumer and business decision-making and distort economic activity. Overall, economic risks remain elevated due to the impact of inflation, an intensifying Fed tightening cycle, continued fallout from the Russian invasion of Ukraine, and waves of new Covid-19 cases and lockdowns in China. As the midterm elections approach, the ramping up of negative political ads may also weigh on consumer sentiment in the coming months. The overall economic outlook remains highly uncertain. Caution is warranted.

This article, Consumer Sentiment Remained Near Record Lows in Late July, was originally published by the American Institute for Economic Research and appears here with permission. Please support their efforts.