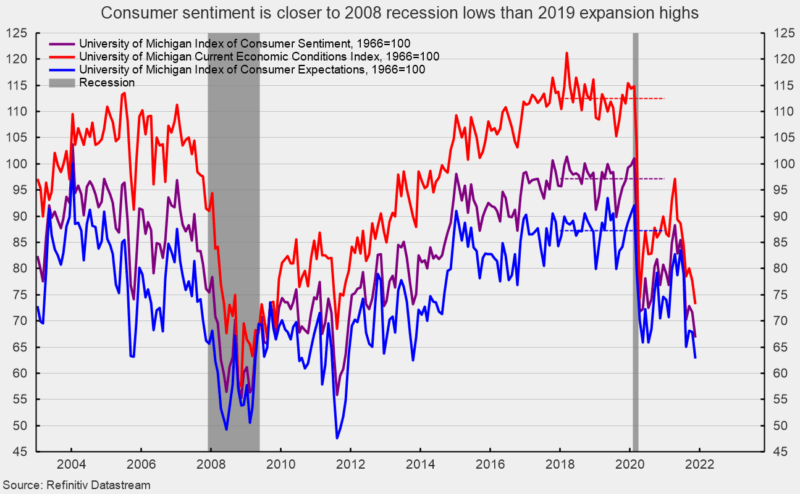 The preliminary November results from the University of Michigan Surveys of Consumers show overall consumer sentiment fell again in early November, continuing the move down since hitting post-recession highs in the spring. The November drop was largely a result of growing fears of rising prices.

Overall consumer sentiment decreased to 66.8 in early November, down from 71.7 in October (see first chart), a 6.8 percent drop. The index is also down 24.3 percent from the post-recession high of 88.3 in April. From a year ago, the index is down 13.1 percent.

The current-economic-conditions index fell to 73.2 from 77.7 in October (see first chart). That is a 5.8 percent decline and leaves the index with a 15.9 percent decrease from November 2020 and a 24.7 percent decline from the April high.

The second sub-index — that of consumer expectations, one of the AIER leading indicators — fell 5.1 points or 7.5 percent for the month, dropping to 62.8. The index is off 10.9 percent from a year ago and 24.8 percent from its June high (see first chart).

According to the report, “One-in-four consumers cited inflationary reductions in their living standards in November, with lower income and older consumers voicing the greatest impact. Nominal income gains were widely reported but when asked about inflation-adjusted gains, half of all families anticipated reduced real incomes next year.” The report goes on to add, “Rising prices for homes, vehicles, and durables were reported more frequently than any other time in more than half a century.”

The one-year inflation expectations rose to 4.9 percent in early November, the highest level since hitting 5.1 percent in July 2008. The one-year expectation has spiked above 3.4 percent several times since 2005 only to fall back (see second chart). The five-year inflation expectation remained unchanged at 2.9 percent in early November. That result remains well within the 25-year range of 2.2 percent to 3.5 percent (see second chart). Historically, one-year expectations have been sensitive to current prices which include volatile food and energy components. The five-year tends to be more stable, consistent with the more stable core CPI measure (see third chart).

Another key result from the early November survey was the notable partisan divisions. According to the report, “Partisans aligned with the President’s party have adopted very positive moods, and those in the opposing camp very negative moods. As a result, partisan supporters of one or the other presidents either mentioned or ignored rising home and stock values, inflation and income growth rates, or mentioned or ignored employment or unemployment rates, and so forth. The partisan differences in perceptions were not minor, but were large and equal in size. They were larger than differences across income, age, and education; moreover, those partisan differences nearly equaled the entire span between cyclical peaks and troughs.” The report adds, “The stylized difference is that one side favors maximizing economic growth and efficiency, the other side on maximizing distributional equity and fairness. Such legislative challenges are won or lost by extreme partisan support drawn from both sides of the aisle. Such extremes, however, make achieving their policy goals much more important than providing effective counter measures to ongoing economic hardships.”

The weaker readings in consumer sentiment reflect a combination of higher consumer prices and intense partisanship. The surge prices for many consumer goods and services is largely a function of shortages of materials, a tight labor market, and logistical issues that prevent supply from meeting demand. Price pressures will ease as production returns to normal, but the process may take an extended period. Intense partisanship may be a longer-term issue that appears to grow in intensity with each election cycle. Whether the pendulum reverses and cooperation returns to the political arena and society in general or the country ends up in civil war is an unknown.

This article, Consumer Sentiment Fell in Early November as Inflation Fears Grow and Partisan Divides Deepen, was originally published by the American Institute for Economic Research and appears here with permission. Please support their efforts.