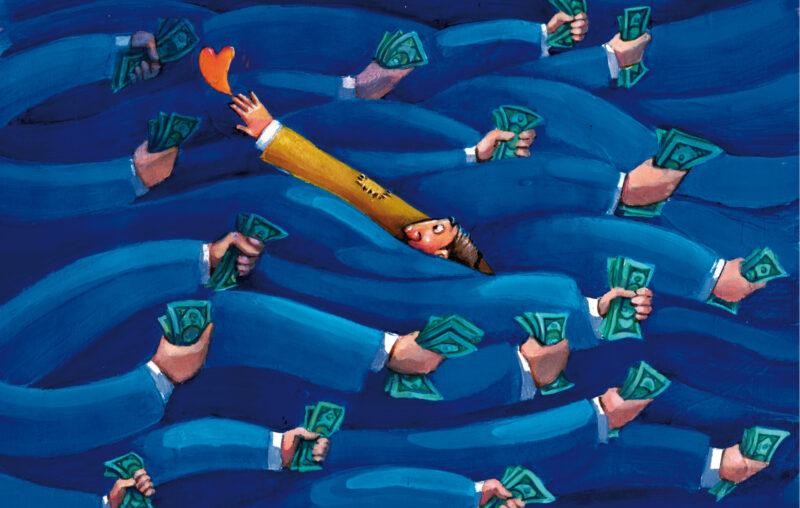 The cartoon figure appearing on the covers of the board game, Monopoly, is a caricature of a well-fed tycoon in a 3-piece tuxedo, sporting a monocle and wearing a top hat set at a rakish angle. While not relying on such a graphic rendering, opponents of free enterprise often conjure up their own cartoonish image of capitalists as being superfluous or parasitic or both.

Karl Marx viewed capitalists as undeserving rentiers, living not from their own efforts but by earning from lending or from inherited wealth. He took their receiving “passive entitlements” as evidence of moral corruption and the injustices arising from capitalism.

Later, John Maynard Keynes also used the term rentier to depict capitalists as “functionless investors” that gained income from owning capital, exploiting its scarcity. In turn, he would enthuse that the “euthanasia of the rentier” was necessary to save capitalism from itself.

But it is misleading to depict capitalists as a monolith in the form of an undeserving rentier. As it is, many of the most important agents of capitalism, e.g., entrepreneurs, inventors, managers and others, may not even own capital. Yet many workers have claims to capital based on their contributions to pension funds or their own private investments.

Concerning the position of rentiers or capitalists within competitive markets (i.e., no government protections or privileges), their incomes and wealth are not merely legal, they are also legitimate, in the moral sense. For example, earnings from voluntary exchange must benefit others as well as themselves or transfers would not occur. These positive-sum outcomes include choices about borrowing and lending as well as consumption and production.

While income or wealth from violence or theft are rightfully denounced, so too should material gains that come from privileges granted by politicians or bureaucrats and enforced by the power of the State. Such ill-gotten gains may be legal, but they are illegitimate, in a moral sense.

Part of what Marx and Keynes missed in their respective complaints is that earnings from interest rates reflect expressions of time preference that exist even in a world without financial transactions. It is indisputable that individuals view present satisfaction as preferable to future satisfaction, as is reflected in the price of all durable goods, not only of financial instruments.

In advanced market economies with economic calculation in money prices, interest rates emerge from and guide financial transactions. As such, interest rates reflect individuals seeking compensation to forgo or delay present consumption by receiving a premium that reflects their time preference.

While time preference is subjective and a matter of individual choices, external factors might cause most or sufficient individuals to increase their time preference so that market interest rates rise. If consumers become more present-oriented, preferring to consume more of their income in the present or near future, they will demand a larger compensation, i.e., a higher interest rate, for deferring consumption. Higher interest rates send a signal to shift resources from making producer goods to making more consumer goods, changing the structure of production in response to and in concert with preferences of consumers.

While a relatively low time preference may allow rentiers to amass a large amount of capital, if it is invested and used to increase the productivity of workers it tends to lead to higher wages and a higher standard of living. Contrary to Marx or Keynes, rentiers whose income or wealth is derived from successful ventures in competitive markets, far from being villains, ought to be considered heroic figures.

The true villains are not rentiers but the central bankers that have facilitated the payment of outsized incomes and awe-inspiring accumulations of wealth. In turn, they have inspired negative impressions about rentiers (capitalists, in general) due to “unconventional” policies (e.g., QE, ZIRP, LSAP) that contributed to greater disparities in income and wealth.

Central bank policies have driven interest rates to historic lows so that profits have tended to rise, especially for private banks, causing an exacerbation of income and wealth inequalities. Not only did historically-low interest rates not euthanize the rentier, even with nominal rates below zero, central bank policies unintentionally (?) actually brought the cartoonish villain to life!

It turns out that rentiers are worthy of contempt if they gain their income or wealth from largesse or privileges granted by legislation or as favors from governmental authorities. These would include rent-seekers like recipients of “corporate welfare” or those holding patents that allow them to restrict access to knowledge and raise the price of obtaining it or of products and services that embody it.

While the outcome of almost all legislation and regulation is to redistribute income or wealth, grant protections from competition or give subsidies, all these are blatant violations of the Rule of Law. As it is, the essence of the Rule of Law is that acts of the State must apply to everyone equally, i.e., no privileges for one person or group that is not available to all others. Legislation and regulations that restrict competition, provide subsidies or redistribute income provide benefits for some individuals or groups while others are treated as milch cows.

Instead of condemning capitalists as rentiers, it would be more just to rein in government regulations or legislation that act as shields from competition and end the arbitrary nature of central bank policy. Besides promoting income inequality, unconventional central bank policy has redirected price inflation towards various asset price “bubbles” and planted the seeds of the next financial crisis.

A sober analysis of the functioning of the financial and real economic sectors reveals that interventions of political agents (i.e., politicians or bureaucrats) or central bankers are the primary source of disturbances. But the damage done by politicians and central bankers is not limited to creating moral hazards that contribute to imbalances and distortions. Their policies also perpetuate injustices that are too often blamed on others.

This article, Capitalists: Superfluous Rentiers or Contributors to Human Flourishment?, was originally published by the American Institute for Economic Research and appears here with permission. Please support their efforts.