Can Mass Subjugation Save American Democracy? 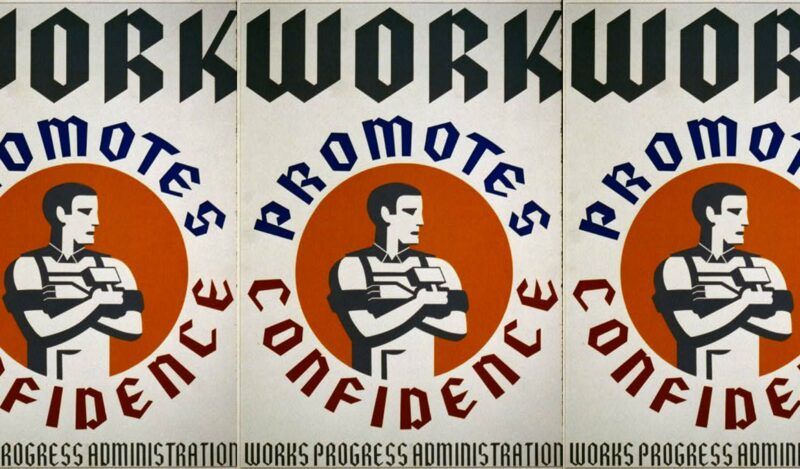 “Beatings will continue until morale improves” has morphed from an old joke to the latest prescription for national salvation. “Compulsory National Service Could Unite America,” whooped a New York Times Op-ed headline last week. Prominent media outlets, think tanks, and too many professors and former generals are calling for government to commandeer a year of young Americans’ lives to forcibly restore their faith in the political system.

Rep. John Delaney made a one-year mandatory service requirement for every 18-year-old a keystone of his Democratic presidential campaign. Last year, the congressionally-created National Commission on Military, National, and Public Service recommended reserving “mandatory service as a last resort” to force Americans to serve as politicians demand. From the Aspen Institute to the Brookings Institution, from the Washington Post to Politico, national service is being whooped up as a silver bullet for all that ails America.

Congress last month created a new federal holiday, Juneteenth Day, spurred in part by focus on the horrors of slavery. But compulsory service advocates are rewriting the script for American history. Apparently, slavery was evil not because of the unjust subjugation but because plantation owners, not politicians, were the profiteers. If the federal government is the beneficiary of forced labor, any quibbles about the 13th Amendment’s prohibition of involuntary servitude are moot.

Compulsory national service is the deranged civics version of Modern Monetary Theory (MMT). MMT theory presumes that politicians can fabricate and spend unlimited amounts of fiat money without profoundly damaging the economy. Similarly, compulsory national service proponents presume politicians can destroy a vast swath of freedom without harming America. Proponents tacitly assume that the time of young people is of zero value, so their scheme costs nothing. Since every 18-to-20 year old is squandering all their time playing video games and watching Pornhub, why not round them up? But where did politicians acquire the right to command young people to postpone building their own lives?

Compulsory national service would provide “attitude adjustment” for an entire generation.  Many proponents stress that shackling young people is the best way to encourage them to be tolerant and appreciative of people of different backgrounds. Pulitzer Prize-winning author and historian Doris Kearns Goodwin favors national service because “you get people from the city to the country, country to the city, you begin to create a new generation that has shared values.” Indoctrination would be a huge part of any such program but the media wouldn’t use that term because progressive values would be inculcated. The vast majority of young Americans spend 12 years in government schools but politicians want more control over their thoughts.

A recent New York Times editorial on the virtues of mandatory service quoted philosopher William James on how such a scheme could encourage “obedience to command.” A Time magazine article touting national service approvingly quoted a retired Air Force veteran: “There isn’t an 18-year-old boy who doesn’t need to get his butt kicked by someone in a position of complete authority.” Do young Americans need to be forcibly taught to recite, “Thank you, Master?”

Compulsory national service could provide politicians with an army to enforce their commands across the nation. After 9/11, the Bush administration created the USA Freedom Corps – a White House agency to oversee all federal service programs. The Freedom Corps quickly became assigned to recruiting informants for Operation TIPS – the Terrorist Information and Prevention System. TIPS aimed to sign up millions of spies—from truck drivers to letter carriers to cable television installers—who would report any “out of the ordinary” behavior to the feds. No clear guidelines were ever issued on what could be considered “suspicious” and worth adding to someone’s federal dossier. The program was widely denounced as a federal snitch system and Congress quickly torpedoed it.

Federal programs are far more likely to blight young people than to turn them into productive Americans. In the 1960s, President Lyndon Johnson launched summer jobs programs that promised to teach good work habits to urban youth. Federal auditors warned in 1969 that many teens in federal summer jobs programs “regressed in their conception of what should reasonably be required in return for wages paid.” Vice President Walter Mondale’s Task Force on Youth Unemployment reported in 1980 that “private employment experience is deemed far more attractive to prospective employers than public work” because of the poor habits youth learned on government payrolls.

The Comprehensive Employment and Training Act (CETA) offers other warnings of the perils of vastly expanding the federal payroll. During the Carter administration, CETA ballooned to provide jobs and training for more than 7 million people. To boost political bragging rights, the feds pressured local governments and nonprofits to maximize the number of CETA hires, turning it into a make-work laughingstock. CETA paid to build an artificial rock for rock climbers to play on, paid “artists” to grope each other’s naked bodies to recognize “male and female characteristics,” and conducted door-to-door food stamp recruiting campaigns. CETA was also a dismal failure for trainees. A Labor Department study revealed that CETA recruits had “significantly lower post-program earnings” than similar individuals who never enrolled in CETA.

AmeriCorps is often touted as the model for what a vast national service could become. But unless photo opportunities for politicians are presumed to be of infinite value, AmeriCorps remains the same hopeless boondoggle it was when President Clinton launched it in 1994. Despite its unctuous motto, “Be the Greater Good,” AmeriCorps has always been desperate to justify its existence, leading it to divert recruits into political rabble-rousing, endless puppet shows for recycling, dawdling as elementary school playground monitors, and “teaching condom negotiation skills.” Though an AmeriCorps honcho boasted that its members had “committed a billion hours of service,” the Government Accountability Office thumped the agency for failing to “demonstrate results” and ignoring “the quality of service provided” by its members. The agency’s inspector general condemned it in 2014 for a “shocking waste of taxpayer funds, lax oversight… and widespread noncompliance with rules, regulations and sound contracting practices.” But the program continues to receive laudatory media coverage because it serves as a smiley face for big government.

Pundits gush about the tasks that conscripts could do as if there was a magical pot of gold at the end of the compulsion rainbow. Actually, “good deed chain gangs” would likely be even more shiftless than AmeriCorps recruits. As John Stuart Mill observed in 1848, “It is a truism to assert, that labor extorted by fear of punishment is inefficient and unproductive.”

But inefficiency is irrelevant to national redemption, right? A New York Times Op-ed rhapsodized, “Many aging Vietnam-era veterans attest to the sense of community that came with… involuntary military service.” Regrettably, the writer – Rutgers University president Jonathan Holloway – was not able to survey the 58,000 Americans who died in that war to gauge their opinions on the benefits of involuntary military service. Last month was the 50th anniversary of the Pentagon Papers, which exposed how politicians perennially betrayed young Americans by sending them to die on false pretenses.

But Washington’s “best and brightest” learned nothing from that damning expose. One of the most prominent advocates of national service is Gen. Stanley McChrystal, who was the U.S. military commander who helped persuade President Obama to send an additional 30,000 American troops to Afghanistan (where more than a thousand of them pointlessly died). An investigation by Special Inspector General for Afghanistan Reconstruction found that it was “common at military headquarters in Kabul — and at the White House — to distort statistics to make it appear the United States was winning the war when that was not the case.” In 2019, SIGAR chief John Sopko summarized the U.S. intervention in Afghanistan: “The American people have constantly been lied to.”

If military and political leaders didn’t hesitate to lie to the hilt about their wars, why would anyone expect them to be candid about the costs and benefits of mass subjugation? There is no reason to expect any national service scheme to be more honest than the Vietnam War, the Iraq War, the Afghan war, or the typical floor debate in the U.S. Senate.

The compulsory service prescription for unity ignores how politicians are to blame for much of the current national strife. Historian Henry Adams observed a century ago that politics “has always been the systematic organization of hatreds.” The bipartisan vitriol pervading Washington is a reminder that only damn fools expect uplift from politicians.

One of the clearest lessons from the compulsory service crusade is that much of the nation’s elite media and opinion makers utterly disdain individual liberty. Since freedom for average Americans has zero value in itself, pundits and poohbahs have zero concern about politicians destroying it. Rather than becoming patriotic, conscripts would likely be embittered to realize that politicians wasted a swath of their lives in which they could have developed their minds and talents to make themselves self-sufficient citizens.

We should not turn young people into cannon fodder for good deeds that exist only in White House press releases. At a time when the media endlessly denounces inequality, remember that the greatest and most dangerous inequality is that between haughty government officials and citizens stripped of their constitutional rights. Peaceful co-existence between all citizens is the recipe for an American revival, not a vast increase in subjugation to indoctrinate the latest Woke Catechism of the Week.

This article, Can Mass Subjugation Save American Democracy?, was originally published by the American Institute for Economic Research and appears here with permission. Please support their efforts.