Can Enemies Be Our Friends? 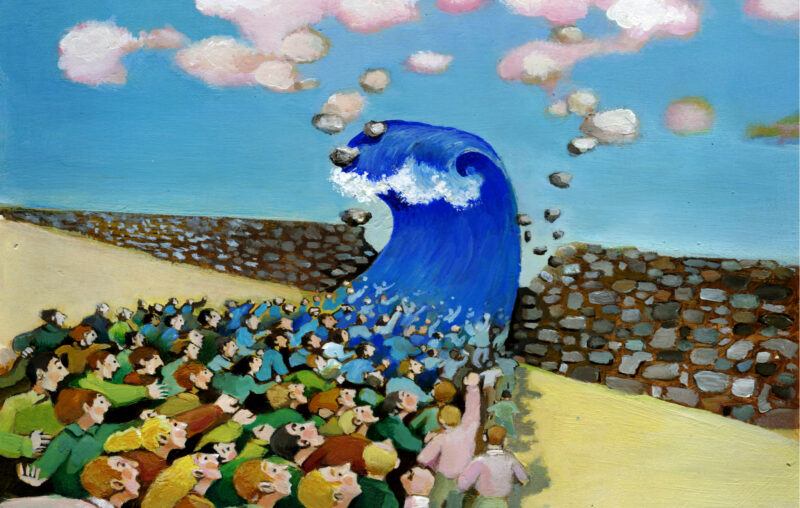 When I came of age as a blatantly ideological environmentalist, gender activist, teetotaler and quasi-socialist, these many different values were fairly detached. The issues that engaged me in my late teens and early twenties didn’t neatly fit together into a political party or cross-sectional movement, unified by a core common belief, but I still cherished them and thought of them as different ways to do good – to “be the change you wish to see in the world.” I was interested in what was right, fair, and useful; as is often the case for youngsters starting out, ideologically and personally, it wasn’t always clear what any of those things meant or how one’s actions brought those goals into being. Often it took the shape of feeling good rather than doing good, a gut feeling of what was the right thing to do – frequently overruled or amplified by reason or some out-of-context study I had read.

I convinced myself that eating meat was unnecessary, unhealthy, and superfluous, and most certainly inconsistent with my green ideals. I saw no benefits to alcohol, and some of its appalling sides had me refusing to drink anything at all until only a few years ago. (It seemed fake to me to only be able to shift your mood or align actions with beliefs under the influence – and cowardice to not own up to your actions afterwards.) I didn’t like what at the time seemed like arbitrary decisions on how men and women ought to behave, dress, what they should like, or to whom they should be attracted, and so I did everything in my power to upend those performed behaviors – to “critically question oppressive structures,” as the jargon now goes.

Needless to say, I don’t think I was easy to be around.

If you were willing to overlook those talking points for a minute and hang out, we could still be great friends. Strangely enough, I surrounded myself with the oddest group of people, whose company I much enjoyed: macho and foul-mouthed soccer players who were constantly trying to get laid; nerdy people who were very mature and relationship-minded already at 17; gorgeous feminists who refused to shave their armpits; Nietzsche-reading contrarians who regularly ditched class and smoked anything that could be smoked, legal or not; a few early girlfriends who were either completely uninterested in political topics (but into nature and forests and tea about a decade before I was) or so obsessed with the good fight that most of our relationship consisted of arguing. Some pretty normal people too, who didn’t care much for the topics that obsessed me and therefore they never came up in our grand nonpolitical friendships.

In each of these people’s companies, I found value and friendship and bliss. My Nietzsche-reading friend had a precocious fascination for philosophy and a genuine desire for finding truth, no matter the superficial arguments he had to wade through to get there or the conventional wisdom he had to upend. The soccer player always made me laugh and was one of the kindest and most considerate people I ever knew, his sexist language and masculine posturing aside. The not-armpit-shaving feminist was ridiculously well-read in European literature, and remarkably tolerant and blasé about what should and shouldn’t be – what the kids today would call ‘chill.’

Some of my feminist friends drank boatloads of alcohol; many of my teetotaling friends could be remarkably masculine or gender-stereotypic; most of my LGBT crowd loved the booze; and only my green party friends were as hyper-focused on climate impact and minimizing footprint as I was.

One of the first really important things I ever wrote was a melancholic essay on what it felt like being caught in the middle, not belonging anywhere, not being understood or fully accepted by any of the ideological groups I was attached to. Terribly cliché for a teenager not to belong, perhaps, but enough so for a writing contest to award me the lordly sum of $600.

Although occasionally painful and often quite profound, many of the experiences that I condensed into that essay taught me something that I think most people used to know and instinctively understand, but many of us have now forgotten: that someone can be a good person even if they make choices different from yours. That close friends are dear to you because of what you’ve gone through together, what you share, and how they make you feel – not because of how they vote, which ideological persuasions drive them, and what positions they’ve taken on this or that topic.

I reminisce on these long-lost years as we seem to have lost that something that I naturally possessed back then (or painfully acquired…): the ability to separate values, ideas, or political statements from what it takes to be a good person.

In our woke times, a disagreement over unsettled issues might be end the of your career – even if you spoke wrongspeak twenty years ago when that was allowable opinion. Lots of staff at Penguin, one of the “Big Five” publishers, felt threatened and uncomfortable with Jordan Peterson merely publishing his latest book there. The New York Times, the pinnacle of the fourth estate in the West, ousted Bari Weiss for publishing broad-tent conservative views. Your party affiliation, not to mention your fluency in the newspeak of intersectional power analysis, is increasingly becoming a hygiene factor for engaging with anyone, let alone getting a job in many industries. Try academia without it.

I recently had the misfortune to be on a date with someone who quickly made sure I knew that human rights were nonnegotiable (what does that even mean?) and that prime among these human rights were trans rights. Uh-huh, I thought, and wondered what that arcane and peripheral topic had to do with our potential relationship.

It turned out that I was merely behind the curve. Wendy Wang’s research shows that cross-party affiliations in marriage are becoming increasingly rare. YouGov reported a survey last year where around 40% of both Republicans and Democrats would be upset if their child married someone from the other party. Even larger-sized studies than that, like Match.com’s ‘Singles in America’ Report, show that the proportion of people who think it impossible for them to date across party lines is increasing fast – from around one-third in 2012 to over half in 2020. Around 70% of Democrats and some 50% of Republicans would consider a ballot for the wrong candidate in 2016 a dealbreaker for their future relationship. The share of survey respondents who say that it is “important for their partners to share their political beliefs” has skyrocketed in the last few years, after having held steady since records began.

A few years ago, Leavers vs Remainers tore a deep divide through British society – and family, friends, and relationships happened to find themselves on either side of that unbridgeable gap. The Trump and Anti-Trumpers have played a similar role in America. In the last 18 months or so, most of these considerations have given way for an even more pernicious and deep-rooted divide: the Covid stance. In all aspects of life, people whose expertise doesn’t warrant them to have an opinion one way or another and people whose interests in political, economical, or epidemiological topics are nonexistent, are forced to take an active stance on all manner of everyday things. Whether and when to wear a mask; whether or not to cancel visits from others; whether or not to travel, or meet strangers, and how; whether or not to inject themselves with substances which some tell them are dangerous and others say are crucial and life-saving. If you make the wrong choice, much hate is now coming your way.

‘Polarization’ and ‘balkanization’ are words that get thrown around in political discourse, in media outlets and information acquisition, but the more damaging consequences happen when we integrate those tribalist political divides into our regular lives. When we banish the unvaxxed from our weddings, or cancel family gatherings because of concerns that one set of invitees are offended at personal choices made by another set of invitees. Over half of Republicans have progressive friends, but less than one-third of Democrats count a Republican among their friend group. And it’s increasingly clear that we don’t understand where The Other is coming from, ideologically and morally speaking.

I’m sure that people of all ages and times have failed in separating political statements and values from the person behind the opinion, but like all people with a present bias, prone to romanticizing the past, I think it looks worse now. Perhaps this inability of ours to separate personality from opinion has moved into social, professional, and emotional fields it didn’t do before. Maybe highly centralized structures have pushed too many one-size-fits-all approaches that make conflicts inevitable; submission or defiance become the only two options when we’re forced to make an irrelevant choice.

Even if they have external effects, many (most?) of the things that divide us are none of anyone else’s goddamned business – what we eat, what we drive, what we wear, what medical procedures we have, what we drink, or whom we love. When did we forget that?

This article, Can Enemies Be Our Friends?, was originally published by the American Institute for Economic Research and appears here with permission. Please support their efforts.