Can Congress Rein in the Fed? 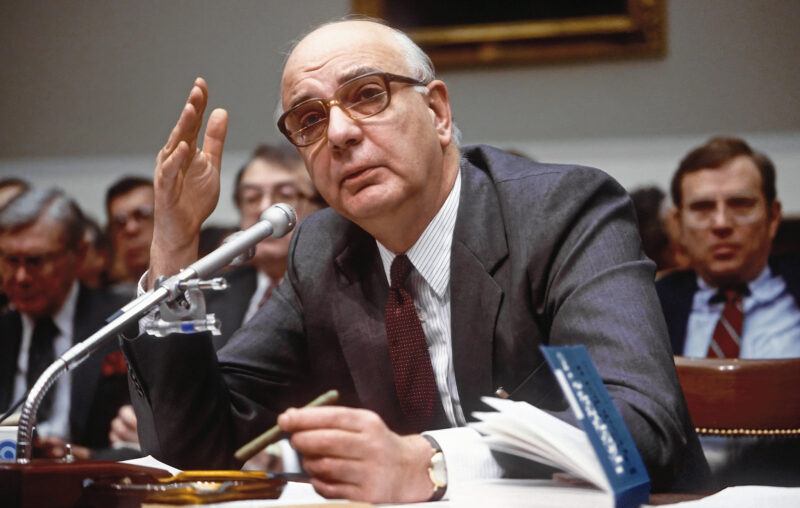 Say what you will about Karl Marx, the man knew how to turn a phrase. His observation about history repeating itself, first as tragedy then as farce, surely applies to the ongoing failure of U.S. monetary policy. Alex Pollock’s insightful essay reminds us that the Federal Reserve faced similar challenges in the past and overcame them with a combination of economic wisdom and strong leadership. Unfortunately, both are in short supply at today’s Fed.

As Mr. Pollock recognizes, inflation is “an endogenous effect of government and central bank behavior.” Under the guise of stabilizing an economy ravaged by covid, politicians and bureaucrats worked together to flood markets with excess liquidity. The combined government budget deficit for 2020 and 2021 was nearly $6 trillion. $3.3 trillion (about 55% of the deficit) in government bonds ended up on the Fed’s books. In effect, the central bank monetized a large share of deficit spending. Lulled into a false sense of security by weak price pressures from 2008-2020, monetary policymakers were unprepared for the subsequent inflationary wave. Consumer prices are now rising at an astonishing 8.5 percent per year, the fastest since 1981.

We’ve been here before. Mr. Pollock tells the story of Fed Chairman Paul Volcker’s resolve to crush inflation. “The Volcker program triggered a sharp recession,” drawing strong condemnation from politicians on both the left and right. Yet Volcker persisted and was eventually vindicated. Inflation fell to manageable levels, the economy boomed, and President Reagan reappointed him to helm the Fed. Sadly, Volcker’s triumph wasn’t the last word on inflation. There is no such thing as the end of history, especially in economic policy. The “temptation to governments and their central banks of excessive printing [and] monetization of government deficits” is always with us. That temptation is currently prevailing over fiscal and monetary prudence.

Volcker was made of sterner stuff than the current chairman, Jerome Powell. Furthermore, the political pressures on the Fed are higher than they’ve been in decades. While central bank officials insist they’re committed to 2 percent inflation “on average,” there’s no way they will tolerate future disinflation—let alone deflation—sufficient to hit this target. The Fed’s credibility, hard-won by Volcker and his successors, is shot. “There is now no avoiding the pain” from inflation, Mr. Pollock warns.

In retrospect, the creation of the Fed was a mistake. The intent of the Federal Reserve Act of 1913 was to strengthen the National Banking System, which admittedly had many flaws. The Fed’s main purpose was facilitating emergency transfers between banks to stave off financial panics. Instead, it gradually morphed into a full-fledged central bank. The American public never truly consented to monetary technocracy. At some point following World War II, it became a fait accompli.

Nor can the Fed be justified by its beneficial consequences. Recessions in the central banking era are just as frequent and severe as they were before. Inflation, which before the Fed was largely unknown in peacetime, has become habitual. Reducing inflation volatility is the Fed’s one apparent improvement. But even this is uncertain. Before the Fed, inflation volatility was high because of wartime finance procedures: suspend the gold standard, print money, redeem the paper when things settle down. After the Fed, the Great Moderation (roughly 1984-2007) made central bankers appear more capable than they are.

Today, the Fed is a juggernaut. With nearly $9 trillion in assets and the ability to pay interest on excess reserves, the Fed has immense power to allocate credit, influencing investment and capital structure throughout the economy. It abuses its regulatory authority by meddling in environmental and social policy on the flimsy pretext that these issues are relevant to financial stability. Developing climate stress tests and pushing research on “structural racism” in the economy are not exactly central banking best practices. The central bank also serves as an academic gatekeeper. As a massive producer and sponsor of monetary policy scholarship, the Fed has an outsized influence on the subfield of economics that studies the Fed’s own effectiveness. The Fed’s good reputation among this crowd is neither surprising nor convincing.

Despite being on the job for more than a century, the Fed still fails at basic monetary policy. Our inflationary woes show central bankers never learned the lessons of the Volcker disinflation, as Mr. Pollock ably shows. Left to itself, as it’s been for too long, the Fed won’t get any better. Instead it will get worse—involving itself in more while delivering less. To quote the economist and social philosopher Frank Knight, “The time has come to take the bull by the tail and look the situation square in the face.” We need Congress to rein in the Fed.

As Peter Boettke, Daniel Smith, and I argue in Money and the Rule of Law, the only way to make the Fed both effective and accountable is with a strict outcome target. Central bankers have far too much discretion to determine the goals of monetary policy. The absence of guardrails is a major reason for today’s inflation. But there’s no reason things have to be this way. Congress can and should step in.

Currently, the Fed has a dual mandate: full employment and stable prices. This is needlessly vague. The Fed should have a single mandate, one focused on keeping steady the demand side of the economy. Forcing the Fed to hit a single target variable would increase price stability without sacrificing employment.

There’s some appetite for this in Congress. A bill currently before the House Financial Services Committee, the Price Stability Act of 2022, strikes the “maximum employment” component of the mandate. This makes stable prices the sole criterion. While an improvement, the mandate remains underspecified. Congress should pick a concrete inflation target: Require the Fed to deliver an explicit growth path for the dollar’s purchasing power. Provided inflation is suitably low, the precise number is not very important. What matters most is anchoring the market’s inflation expectations. Predictable monetary policy facilitates short-term flexibility as well as long-term contracting. Since the Fed can’t make credible commitments with a self-adopted rule, the target’s content and enforcement must be the prerogative of the legislature, not the central bank.

The only way the Fed can lower unemployment is by stabilizing what economists call aggregate demand: total spending on goods and services at current market prices. When aggregate demand sputters, the Fed can keep the dollar’s value on its growth path by providing the market with needed liquidity. This stabilizes output and employment as a byproduct. Thus, having a separate employment plank in the Fed’s mandate is redundant. It’s also dangerous: Central bankers will use any excuse they can to tinker, which is beneficial for them but costly for the economy. Better to foreclose that option.

An inflation target is not an economic panacea. When there are supply-side problems, targeting inflation might destabilize markets. Transportation issues, energy supply spikes, and a host of other considerations tend to raise prices. The Fed would have to contract aggregate demand to keep inflation in its target range. We still get a stable dollar, but potentially at the cost of a recession.

Many economists, myself included, favor targeting aggregate demand directly. Stabilizing nominal GDP (which equals aggregate demand) works better than stabilizing the dollar when the supply side of the economy is weak. Yet implementing a nominal spending target can be tricky. Furthermore, the public might not understand how this rule works. Given the public demands to whip inflation, it’s almost certainly better politics for Congress to pick an inflation target, despite its imperfections.

Legislators should resist the temptation to meddle in the day-to-day affairs of monetary policy. It’s appropriate for Congress to select the Fed’s goals. But it’s inappropriate for politicians to micromanage central bankers, especially when partisan agendas come into play. Currently, the risks of politicized central banking are greater on the left than the right, but that could change.

Policy wonks often make the perfect the enemy of the good. To get control of the Fed, we must resist this temptation. Even a flawed rule is better than no rule at all. Mr. Pollock reminds us the Fed will make the same mistakes all over again if left to its own devices. It’s time to break the cycle. As long as we’re stuck with a central bank, we should give it an unambiguous mandate and watch it like a hawk. Monetary policymakers answer to the people’s representatives, in Congress assembled. Let’s remind them.

This article, Can Congress Rein in the Fed?, was originally published by the American Institute for Economic Research and appears here with permission. Please support their efforts.