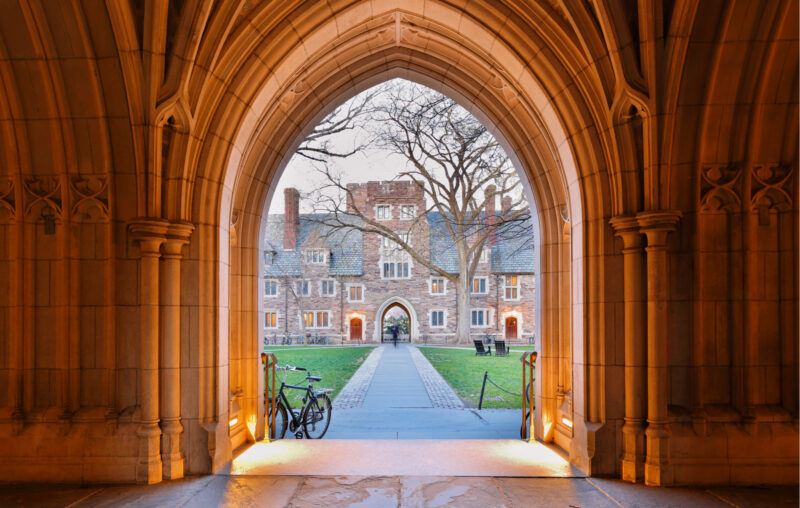 In Rules for Radicals, Saul D. Alinsky’s handbook for left-wing activists, Alinsky gives thirteen rules for community organizers. Rule number four is “Ridicule is man’s most potent weapon.” That rule is relevant for fighting wokeness on campus. And Scott Johnston, author of Campusland, a novel published in 2019, understands that.

Usually people’s first novels aren’t good, but Johnston’s is a gem. With all the wokeness and intimidation happening on U.S. campuses in the last few years, we were due for such a novel that incisively makes fun of wokeness. Nothing in Johnston’s resume suggests that he would have done a good job. He worked at Salomon, opened some nightclubs in New York, and founded two tech start-ups. It’s true that he has written books on beer drinking and golf betting games, but that doesn’t seem like a straightforward way to become a first-rate novel writer. Yet the novel is first-rate and, although it’s humorous, it’s more profound than that. It’s about Ephraim Russell, a young assistant professor of American literature who teaches at fictitious Devon University, a small elite private university with a multi-billion-dollar endowment. Russell is up for tenure and his odds seem good. But while teaching The Adventures of Huckleberry Finn, a novel about which he is passionate, he gets caught in the buzzsaw of phony charges of racism. When we remember a real-world story about a professor teaching Chinese to a class at UCLA getting in trouble for pronouncing a Chinese word that sounds awfully like the N-word with a -ga at the end, it’s completely believable that Russell would get in trouble for teaching a novel in which the actual N-word is used repeatedly. Will this affect his chances at tenure? Obviously yes, but enough to torpedo his chances? I won’t tell you.

Later, Russell gets even deeper in hot water when an attractive, sexually precocious 18-year-old co-ed visits him in his office unannounced and comes on to him. When word gets out about that, it seems that his chances for tenure have dimmed even more.

There are various players in the drama, each with his or her own goals and incentives. There’s Martika Malik-Adams, Dean of the Office of Diversity and Inclusion, who makes clear that she is out to get Russell. There’s Red Wheeler, a super-trust-fund baby who has been an undergrad at Devon for seven years and heads the Progressive Student Alliance. He’s always looking around for an issue to protest so that he can get publicity and put heat on the campus administration. Milton Strauss is the milquetoast president of Devon who tries to smooth things over with every interest group, often using some of the earnings from the $28 billion endowment to start various special studies programs and hire people of color and women to teach in the programs.

One of the key factors leading to various behaviors in the story is alcohol. And Johnston has a keen eye for the unintended consequences of governments’ attempts to regulate alcohol. In 1984, President Ronald Reagan signed a federal law, pushed by Mothers Against Drunk Driving, to withhold five percent of a state’s highway funds from any state government that did not set the minimum age for drinking at twenty-one. Previously the age had ranged from eighteen to twenty-one, depending on the state. Five percent doesn’t seem like a lot, but state governments are nothing if not greedy. All state governments whose drinking age was not already twenty-one changed their drinking age to get that five percent.

While Johnston doesn’t mention Reagan’s role, he does lay out some of the unintended, but predictable, consequences of the law.

Consider, for example, fraternities. President Strauss had long wanted to prohibit fraternities, and in the 1970s his predecessors had almost succeeded. But the 1984 law meant that “fraternities sprouted like invasive weeds.” Why? Johnston explains:

But big, campus-wide parties? Those were now a thing of the past. Students slithered into the nook and crannies, mainly dorm rooms and fraternities, consuming what they wanted behind closed doors where they wouldn’t be caught by RAs and other mandated busybodies. Beer, the college beverage of choice since the first student was forced to read Proust, faded away. Too bulky. No way to sneak a keg into your dorm. Vodka was the new poison, its primary virtue lying in its efficiency–a mere ounce was equivalent to a whole beer, so it was easy to sneak around, and it mixed with about anything.

Various economists who have written on the drug war have pointed out something similar. There is more bang for the buck from an ounce of cocaine than from an ounce of heroin and so government enforcement against both drugs probably pushed people somewhat away from marijuana and somewhat toward cocaine.

Johnston also notes other subtler consequences of the higher drinking age. He writes:

Social life became cliquey, balkanized. With the open-to-all, campus-wide parties gone, students now huddled in groups of six or ten or twelve. These groups had an irritating habit, from a progressive college administrator’s point of view, of self-selecting almost completely along demographic lines.

When I read the book and started to understand the motivations of the various players, it was like watching two trains going twenty miles apart hurtling towards each other on a single track. You just know they’re going to collide and you wonder how destructive it will be. One major difference, though, makes my metaphor imperfect: free will. People can make different choices and when one person in particular makes a different choice because of his particular incentives and not because of any residue of integrity, it greatly affects the outcome.

One major legal factor in all this, besides the legal drinking age, is the presence of Title IX as interpreted by the Obama administration. In a now-famous (infamous?) “Dear Colleague” letter from the U.S. Department of Education’s Office of Civil Rights (OCR) posted on April 4, 2011 is the following statement:

You can see how that plays out in Dean Malik-Adams’s behavior. If a college handled an alleged case of rape badly enough, the federal government could cut off all federal funding of that college. At Devon and, indeed, at many actual U.S. colleges, that funding can amount to a few hundred million dollars annually. Therefore, to falsely accuse a male and then later lose to him in a civil suit for, say, one million dollars was a good trade.

But what if a year or even a quarter passed in which no one alleged a sexual assault. That’s good, right? Wrong. Johnston writes:

For any college to keep the OCR happy, it had to show results. Filing quarterly reports with no cases of assault wasn’t an option. While it might suggest the Devon campus was a halcyon island of sexual accord, the OCR would be suspicious.

For that reason, the college administrators needed to “educate” female students about what constituted assault. And the education worked. Johnston writes:

The result of these initiatives was a 500 percent increase in reported incidents, an improvement Malik-Adams had used to great effect in her last compensation review.

Is Johnston exaggerating? In a note at the end of the novel, he writes:

Campusland is a work of fiction. Kind of. The American college has evolved into a strange place, and while Campusland is written as satire, it doesn’t stretch the truth by much, and sometimes not at all. Title IX, as depicted, is true to life. If you want some good nonfiction on the subject, I suggest Laura Kipnis’s excellent (and horrifying) book Unwanted Advances. (Note: As of this writing, the Department of Education has begun reviewing some of Title IX’s more troublesome aspects.)

On September 22, 2017, while secretary of education under President Trump, Betsy DeVos rescinded the 2011 “Dear Colleague” letter. Although President Biden has promised to review DeVos’s action, the Obama-era approach has not yet been reinstated.

Incentives matter for the undergrads too. One of the more-senior faculty members, Fred Hallowell, in a discussion with Ephraim Russell, points out how. He tells Ephraim that fifteen years earlier, he had started noticing how entitled many students felt. And who felt the most entitled? Hallowell says, “The ones who come for free, the ones with no skin in the game.” How did the students get entitled? Part of it was that their parents and others told them incessantly how special they were “even if they hadn’t done a goddamn thing to deserve it.”

The novel is full of nice little touches. Here’s one of my favorites, a few lines that Ephraim overheard at the Faculty Club: “So I had this student who wrote a paper—a paean, really—to Hayek. Can you imagine? Does he think this is Chicago? Who does this kid think he is?”

If you can predict Professor Ephraim Russell’s career move at the end of the novel, you’re better than I. I didn’t predict it, but I found it believable. But read the book for yourself and see what you think.

This article, Campusland: A Delightful Book Delivers, was originally published by the American Institute for Economic Research and appears here with permission. Please support their efforts.