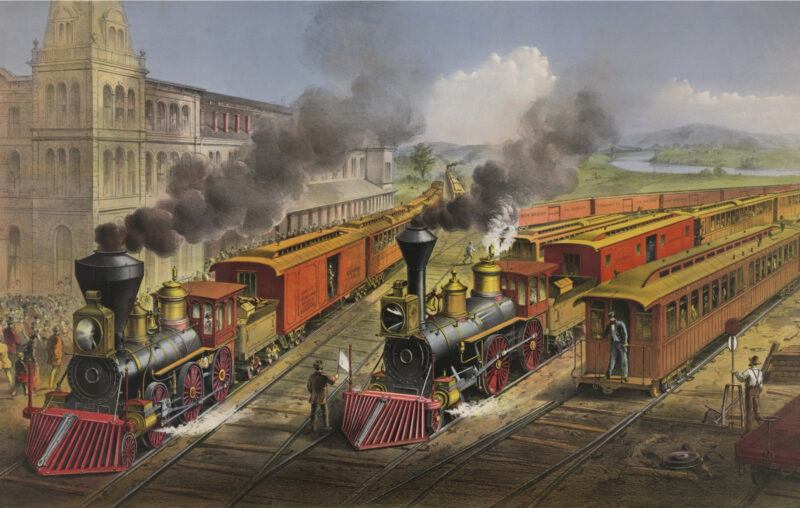 When most readers think of Johns Hopkins today, they think of the world-renowned university in Baltimore whose medical school made it possible for people to die once, but live two, three, and four times. The advances crafted at the University that Hopkins created with a $7 million donation (the largest ever of its kind in the 19th century) turned diseases that had been terrifying death sentences into yesterday’s worries.

The source of Hopkins’s immense wealth was primarily his large stake in the Baltimore & Ohio Railroad. So many fortunes from that era were made in rail. As a consequence, we’re all very fortunate heirs to what Hopkins, Collis Huntington, Leland Stanford, Cornelius Vanderbilt and others achieved two centuries ago.

That their names are synonymous with great wealth to this very day is the surest sign of their remarkable achievements. With the creation of railways, it’s not just that they figuratively shrunk the United States, and eventually the world. Even better was that they mass produced a new form of transportation in the first place.

The above is crucial to think about when it’s remembered that all advances take place amid endless skepticism. In other words, Silicon Valley is littered with investors who passed on Amazon, Apple and Facebook. What’s new, and what’s transformative, rarely makes sense at first. If it did make sense, it wouldn’t be transformative.

Readers should think of the railway barons and their creativity in the same light. They saw what no one else did. Their grand fortunes speak to this basic truth. If rail had been obvious, opportunity to amass great wealth in the space would have been greatly reduced. In that sense, it’s not unrealistic to refer to the rail visionaries whose names can be found on all manner of universities, hospitals and museums as “Silicon Valley” before Silicon Valley. Hopkins, Huntington, Stanford et al were the Bezos, Jobs, and Zuckerbergs of their time.

That they were is something that the titans of so-called ‘Big Tech’ would be wise to spend more than a little time contemplating. Indeed, there are timeless lessons that can be learned from the business miracle that was the railroad industry.

That’s the case given the basic truth that success has many fathers as it were. Put another way, what’s lucrative ultimately attracts a great deal of political attention. This was certainly true for the railroad industry.

This creator of great wealth soon found itself regulated. The Interstate Commerce Act of 1887 brought with it the Interstate Commerce Commission (ICC) that soon enough was setting rail rates. Notable here is that the barons of rail, seemingly worn down by the immense competition that was a consequence of their unexpected profits, welcomed the rate setting. If rates are legally controlled, so is outside competition. Translated for those who need it, rate setting at least in the near term protects the incumbent businesses at the expense of newcomers eager to knock them from their lofty perches.

Of course, the problem with government intervention is that it’s never light. Whereas private sector businesses are rewarded for doing much more with much fewer labor inputs, government entities are rewarded (and protected) the more that they employ individuals, and without regard to the productivity or worth of those they employ. Basically government bureaucracies always in search of a greater purpose find that purpose through more activity. The ICC figured out new ways to regulate the railroads.

An ICC that began as a light-touch rate setter was soon enough overseeing most every aspect of railroading, including customer service. Worse, it didn’t stop there.

Never forget that government is constrained by the known. While entrepreneurs are by their very name working feverishly to rush a very different commercial future into the present, government commerce is all about recreating what already exists. In short, the government that started out by setting certain railway fares was soon enough in the businesses of railroads.

The worry here is that history is repeating itself, albeit in the technology space. We presently have this rather amazing industry largely based in Northern California, and that is yet again rushing into the present what seemed unimaginable not too long ago. If anyone doubts this, just consider the smartphone you’re likely reading this essay on. In your hands sits a supercomputer that, if the technology existed just a few decades ago, would have cost tens of millions to produce. You have access to the world’s plenty, you can communicate in split-second fashion, you can track your health, and you can conduct your job on the device that you hold in your hand. You should be amazed, assuming you’re not.

Back to what’s worrisome, it seems the visionary descendants of American ingenuity in the rail space are on the verge of erring in much the same way they did. Individuals like Mark Zuckerberg are casually saying they’re “cool” with higher taxes, and worse, he’s welcoming regulation into a sector that not too long ago was too outre to bother regulating. Zuckerberg is all too aware of how his Facebook vanquished former giants of the social media space like Friendster and MySpace, so maybe a little bit of regulation would do his creation good?

Big Tech seemingly also accepts or calls for regulation now for the same reasons that it was accepted in the late 19th century: outrage. While small in number, those bothered by great fortunes that are nearly always a consequence of brilliant innovation are able to generate a lot of political and media attention. Seemingly eager to quiet the ranting of these 21stcentury squeaky wheels in the way that “Robber Barons” were eager to quiet the ankle biters of their era, Big Tech accepts government interference as a way of restraining those eager to destroy them. They would be wise to rethink their strategy.

Better yet, they would be wise to remind themselves why they became great in the first place. They did because they were relentless in their desire to change how we live, work and socialize, but they were also desperate. And precisely because they were desperately creating an all new future, their path to wealth was anything but smooth. Or certain. For most it was a bit terrifying. Such is the beauty of the free marketplace. It forces creativity that regulated marketplaces do not.

Regulated, protected marketplaces are ultimately yesterday’s marketplaces given the basic truth that what’s protected from market realities is ultimately blind to them. Regulation and protection didn’t save the railroad industry; rather it ensured its slow descent into second-class status. What’s not fighting for its survival on a daily basis eventually becomes soft and dated. The U.S. railroad industry exists today, but few associate it with innovation. The innovators have migrated to greener pastures.

Those pastures are largely on the west coast, and in the Big Tech sector. Here’s hoping a desire for near-term comfort from competition, criticism, and the markets doesn’t do to Big Tech what was done to Big Rail. Time will tell. But for now, it seems Big Tech is intent on traveling a path toward average that was first paved by the 19th century’s most innovative minds.

This article, ‘Big Tech’ Risks Going Down a Path of Decline Paved by ‘Big Rail’, was originally published by the American Institute for Economic Research and appears here with permission. Please support their efforts.