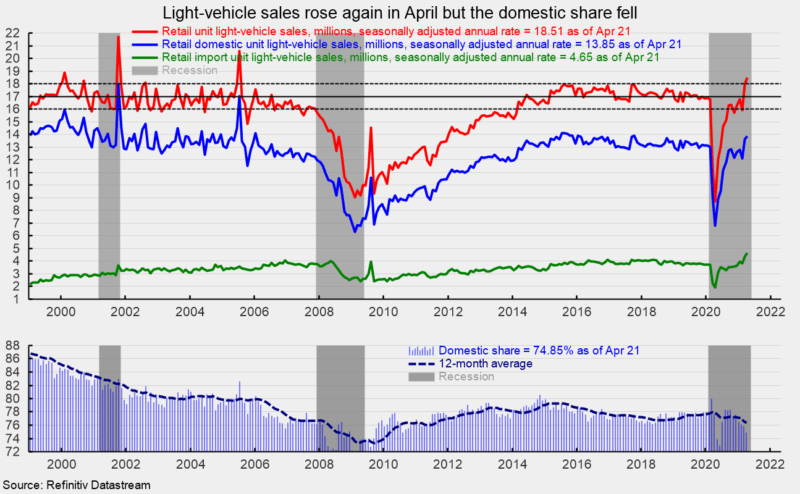 Sales of light vehicles totaled 18.5 million at an annual rate in April, above the 18.0 million pace in March. The April result was the first month above the 16 to 18 million range and the fastest pace since July 2005. Unit sales plunged in March and April 2020 to 11.4 million and 8.7 million annual rates, respectively (see chart). The pace of sales in April 2020 was the lowest on record since this data series began in 1976 and follows a run of 72 months in the 16 to 18 million range from April 2014 through February 2020. Recent strength is a positive sign for consumer spending but may also be partially attributed to a potential chip shortage with consumers looking to accelerate purchases before inventories decline and prices rise.

Breaking down sales by origin of assembly, sales of domestic vehicles rose to 13.9 million units versus 13.6 million in March, a gain of 1.7 percent, while imports rose to 4.7 million versus 4.3 million in March, a rise of 7.2 percent. The domestic share came in at 74.8 percent in April versus 75.8 in March.

The light-truck share stood at 77.7 percent for April, completely dominating the car share of 22.3 percent. The dominant share of light-trucks continues a long-term trend. As recently as March 2013, the split between cars and light-trucks (SUVs and pick-up trucks) was about even, with both segments selling about 7.8 million at an annual rate.

This article, Auto Sales Hit highest Level Since 2005, was originally published by the American Institute for Economic Research and appears here with permission. Please support their efforts.

Early Retirement Health Insurance: What You Should Know

Will UPS Stock Rebound After A 7% Fall Yesterday?