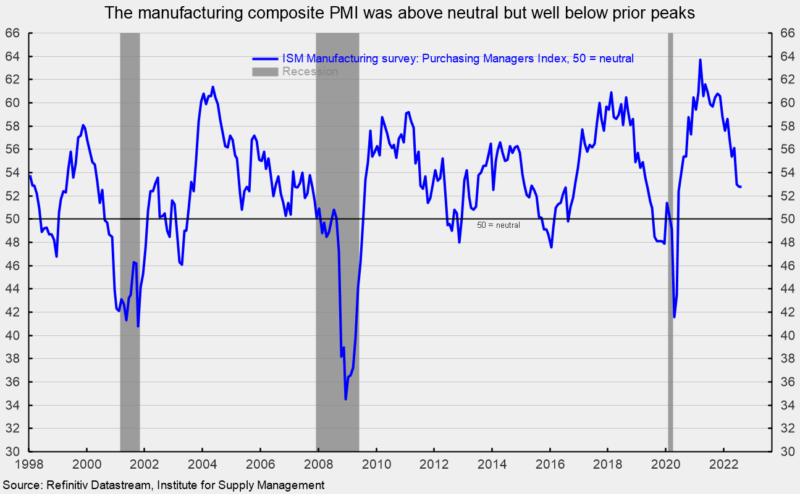 The Institute for Supply Management’s Manufacturing Purchasing Managers’ Index was unchanged at 52.8 percent in August, holding modestly above the neutral 50 level. August is the 27th consecutive reading above fifty, but the level is down sharply from the March 2021 peak (see the first chart). Several key component indexes were also close to neutral in August, including the prices-paid index and the supplier deliveries index, which are down from extreme levels recently. According to the report, “The U.S. manufacturing sector continues expanding at rates similar to the prior two months. New order rates returned to expansion levels, supplier deliveries remain at appropriate tension levels and prices softened again, reflecting movement toward supply/demand balance.”

The Production Index registered a 50.4 percent result in August, dropping 3.1 points from July (see the top of the second chart). The index has been above 50 for 27 months but is at the lowest level since September 2020.

The Employment Index posted a strong gain in August, moving solidly above the neutral threshold. The 54.2 percent reading suggests payrolls expanded in the manufacturing sector in August (see the top of the second chart). The report states, “Labor management activity improved in August: A larger share of comments (11 percent in August, up from 7 percent in July) noted greater hiring ease, and among respondents whose companies are hiring, 18 percent expressed difficulty in filling positions, down from 35 percent in July. Turnover rates eased, with 33 percent of comments citing backfill and retirement issues, a decrease from 39 percent in July. Employment gains in August should translate into stronger expansion in production growth in September.” The report adds, “According to Business Survey Committee respondents’ comments, companies continued to hire at strong rates in August, with few indications of layoffs, hiring freezes or head-count reductions through attrition. Panelists reported lower rates of quits, a positive trend.”

The Bureau of Labor Statistics’ Employment Situation report for August is due out on Friday, September 2, and expectations are for a gain of 300,000 nonfarm payroll jobs, including the addition of 20,000 jobs in manufacturing.

The new orders index rose by 3.3 points to 51.3 percent in August, following two consecutive readings below neutral. The result suggests orders expanded for the month (see the bottom of the second chart). The new export orders index, a separate measure from new orders, fell below neutral to 49.4 percent versus 52.6 percent in July. The latest reading is the first below 50 following 25 consecutive months of expansion.

The Backlog-of-Orders Index came in at 53.0 percent versus 51.3 percent in July, a 1.7-point rise (see the bottom of the second chart). This measure has pulled back from the record-high 70.6 percent result in May 2021 but has been above 50 for 26 consecutive months. The index suggests manufacturers’ backlogs continue to rise, but the expansion pace is modest overall.

Customer inventories in August are still considered too low, with the index coming in at 38.9 percent, off 0.6 points from July (index results below 50 indicate customers’ inventories are too low). The index has been below 50 for 71 consecutive months. Insufficient inventory is a positive sign for future production.

The supplier deliveries index registered a 55.1 percent result in August, down 0.1 points from July. The index was at 78.8 percent in May 2021. The easing trend over the past 15 months suggest delivery lead times are slowing at a much slower rate (see third chart).

The index for prices for input materials sank again, dropping another 7.5 points to 52.5 in August and is the fifth consecutive monthly decline (see third chart). The index is down from 87.1 percent in March 2022 and is at the lowest level since June 2020. The result suggests price pressures have eased significantly. The report notes, “Prices expansion eased dramatically in August, which — when coupled with lead times easing — should bring buyers back into the market, improving new order levels.”

The manufacturing sector continues to see solid demand and is progressing towards a better supply/demand balance. However, economic risks remain elevated due to the impact of inflation, an intensifying Fed tightening cycle, continued fallout from the Russian invasion of Ukraine, and waves of new Covid-19 cases and lockdowns in China. The outlook remains highly uncertain. Caution is warranted.