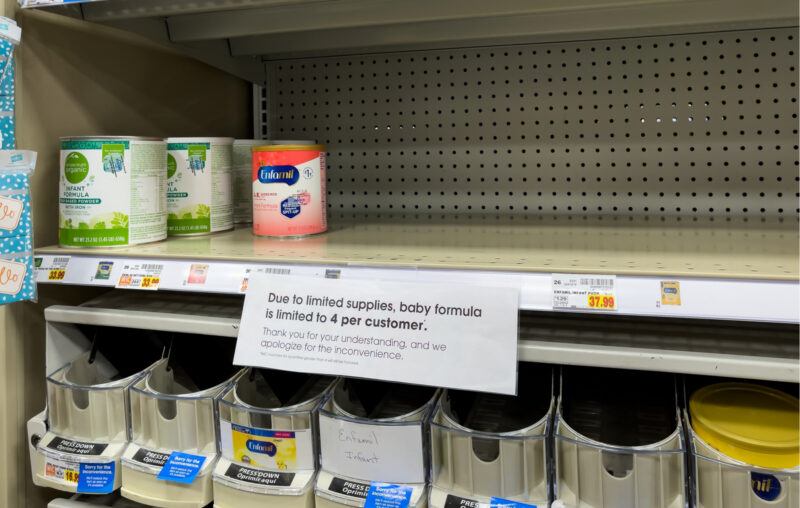 Baby formula was in the news earlier this year because of what was perceived to be among the worst baby formula safety concerns and supply shortages in history.

Today, baby formula is again in the news because of what some parents perceive as severe shortages of formula across the country. The numbers bear this out, as highlighted in an April study by Datasembly. In April, the out-of-stock rate of baby formula hit a whopping 31 percent. This is up from 20 percent in November 2021 and, as a very sharp contrast, from as low as 2 percent in the first half of 2021.

So what’s causing these shortages? Isn’t baby formula pretty simple, in that manufacturers can make more to meet demand?

According to the Datasembly report, several factors are at play at the same time. The effect of all of these together is making the shortage more acute. The recalls of the last few months are a factor, but inflation and supply chain issues resulting from the pandemic are also at play.

One of the dangers of a baby formula shortage is that parents, out of perceived necessity, might be tempted to stretch their supply. Baby formula isn’t Hamburger Helper — finding homemade hacks to stretch supply in these difficult times is understandable but always a bad idea.

Some parents are adding water to formula, which can be very dangerous, while others are trying to make formula at home with varying degrees of success and often inadequacy of recipes.

Charlie Cartwright, a Palm Beach, Florida, lawyer, reminds us that modifying baby formula can be risky: “It’s very important that the directions on baby formula containers be closely followed so that it’s used as the manufacturer intended.  There is always a health risk when consumers modify the product, even by watering it down to extend their supply.”

The only equitable short-term solution actually makes things worse. Major retailers such as Walgreens and CVS are limiting formula purchases to three containers of formula per transaction, according to the CNN report. While this is a necessary step to prevent hoarding and keep formula accessible to more families, it means that no one really has enough.

This isn’t going to get better anytime soon. It’s not a “you keep buying it, we’ll make more” situation because if it were that simple, the formula manufacturers would be happy to have that revenue. With no clearing in sight from the perfect storm of supply issues, consumers will continue to struggle.

This article, Assessing the Baby Formula Shortage, was originally published by the American Institute for Economic Research and appears here with permission. Please support their efforts.

The Ratings Game: Apple confirms it’s one of TSMC’s first Arizona customers, while Intel preps for return to cutting edge in 2023

The Tell: ‘No cuts until 2024,’ says Goldman economist about Fed’s likely path on interest rates