As China Celebrates a Birthday, Hong Kong Has a Funeral 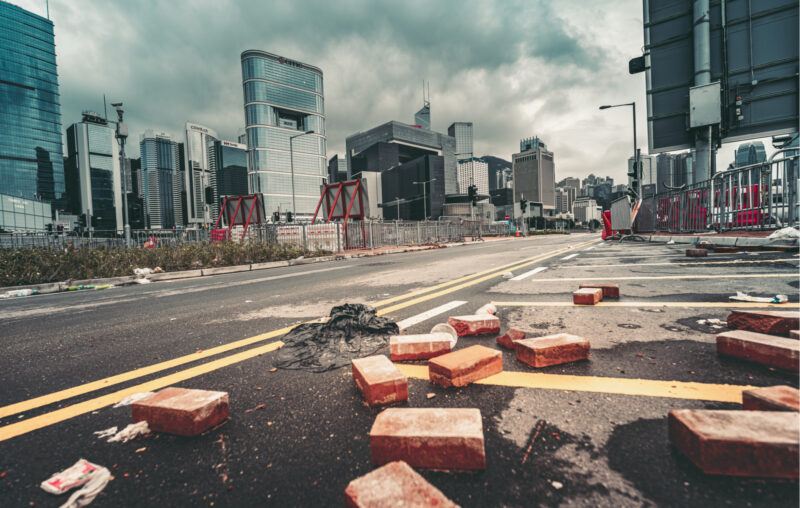 On October 1 last year, China celebrated its 70th anniversary of one-party rule. It was marked by a conspicuous display of military prowess, including the unveiling of new weaponry. This type of celebration had been relegated to just one each decade, with smaller commemorations on the fine year marks. But with China’s increasing power, and the rise of Xi Jinping, there have been five large celebrations in the last decade alone. Xi, China’s Communist Party General Secretary, President and Central Military Commission Chairman, was the guest of honor. Not content with merely collecting titles, he has also snapped up many of the limited freedoms his citizens had previously enjoyed.

So what was this anniversary party like? All of Beijing was on a lockdown, especially the neighborhoods near Tiananmen Square. Anything that could be flown, like drones, balloons, or even racing pigeons, was restricted. Hotel guests were informed that there would be limitations on when they could enter and exit their hotels leading up to the event. Restaurants were closed, or had limited hours. In the Chinese regime, these were only small inconveniences. They were expected on the part of the Chinese people.

In Hong Kong however, these types of intrusions were anything but expected. For Hong Kongese, freedom is still within living memory. At the same time, much of Hong Kong was protesting National Day, resulting in the police shooting of a young man, the first victim of police firearms in nearly 4 months of continuous protests. Earlier that summer, Beijing had passed the new National Security Law, a draconian set of vague rules that essentially make any sort of dissent in Hong Kong illegal and punishable by extreme measures. Beijing had agreed to allow Hong Kong to be self-run as an independent regime until 2047 as part of the agreement hammered out by Margaret Thatcher and Deng Xiaoping to return Hong Kong from British to Chinese control in steps and stages. But where China had been chipping away at this wall of freedom, it finally brought out the sledgehammers.

We saw terrible incursions on the independent judicial process in the case of Tong Ying-kit, the first individual to be charged and convicted under the new regime. The English common law traditions, which the Hong Kongese had long used, were set aside. Gone were jury trials, replaced by a panel of 3 judges appointed by the Chief Executive of Hong Kong, Carrie Lam, a puppet of Beijing. So Tong Ying-kit will now serve 9 years for simply riding a motorcycle into a police barricade and carrying a banner with “Revolution of Our Times, Liberate Hong Kong” emblazoned on it.

Of course, this is not the only thing that China has done to undermine the “one country, two systems” divide to which they agreed. This year, Beijing imposed stricter voting limitations. Currently, only 4,900 voters were allowed to select 364 positions out of 412 candidates, meaning many Pro-Beijing “patriot” candidates were running unopposed. There was a presence of 6,000 police officers at the polls — more than one officer present per voter. Over the past year there have been mass arrests of pro-democracy activists, and the voluntary and involuntary disbandment of groups, as it has become too dangerous to hold contrary opinions.

China has even decided only to allow mainlanders to purchase tickets for the Winter Olympics in Beijing this February. The integration of Hong Kong only goes so far. The Chinese government seems much more interested in punishing the Hong Kongese for their truculence, rather than including them as full citizens.

So every year China celebrates National Day. And every year we mourn the loss of a free Hong Kong.

This article, As China Celebrates a Birthday, Hong Kong Has a Funeral, was originally published by the American Institute for Economic Research and appears here with permission. Please support their efforts.