Are We In a Cold War With China? 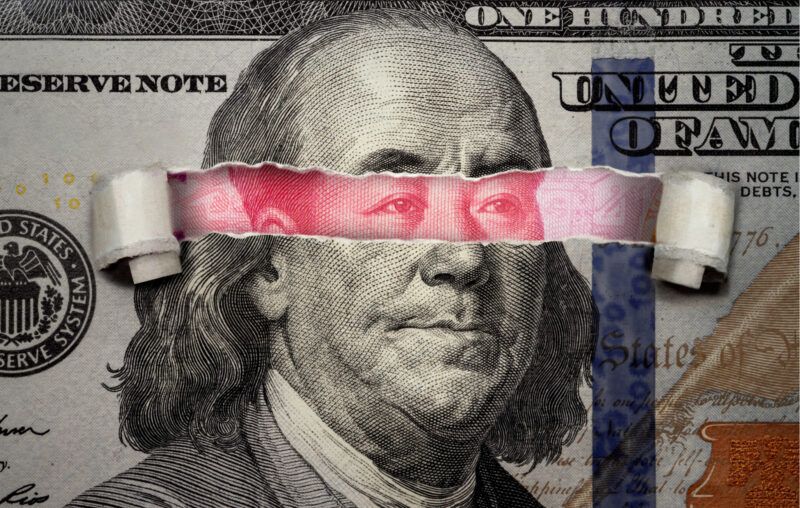 China is a brutal, totalitarian regime with ambitions of global leadership that seeks to export its authoritarian ideology to other countries. It is actively committing ethnic cleansing and borderline genocide while forcing those around the world to keep quiet. The Chinese military has radically expanded and modernized as the CCP continues to make more aggressive impositions across Asia. During the last set of US-China talks, our differences could not have been more stark. Both countries exchanged aggressive words while highlighting two different visions for the world.

The question, of course, is whether we are now or will enter into a cold war with China. This is a dangerous idea and thankfully, with more context, it is clear that we are not. With this in mind, politicians should aim to turn down the temperature of US-China relations and be wary of attempting to implement cold war-style tactics.

The Difference Between a Cold War and a Rivalry

The correct way to explain US-China relations is one of a great power rivalry for global influence. The United States wishes to defend the rules-based international order that prioritizes human rights, liberal democracy, and open trade. The Chinese wish to subvert it with a cooperation amongst states model, which eschews the universal values of the rules-based order for one of political subjectivism. That is that all political systems, from the most genocidal to the most benevolent ought to be respected and countries should merely focus on areas that they agree on. Both systems can be understood on both ideological as well as self-interested grounds.

The Chinese system can generally be understood as making the world safe for authoritarianism, particularly its own government as countries would be discouraged from speaking out against various injustices. Although the Chinese would like such a system to be as inclusive of various state interests as possible, it is clear that their interests would take priority as they would be the dominant power, much like how the US currently engages in hypocritical behavior today. This is also shown by China’s ambitions to return to its former imperial glory, which was characterized by not necessarily conquering its neighbors, but turning them all into subservient vassal states with China in the center.

As a result, we are certainly in a rivalry for global influence but not a cold war. A cold war is characterized by a desire to annihilate and erase the opponent. That certainly characterized the Soviet Union and the United States during the second half of the 20th century but does not characterize US-China relations.

Melvyn Leffler, professor of history emeritus at the University of Virginia, explains that there are very clear differences in our current rivalry with China. He points out that the cold war between the United States and the Soviet Union was clearly a phenomenon that stemmed from a desire to go to war but no will to follow through. Both sides competed for strategic assets around the world and even engaged in proxy wars to stem the spread of Communism or Capitalism respectively. Both sides wished to erase the other’s way of life and the only thing stopping an actual conflict was war exhaustion post-World War II on the one hand and the development of strong nuclear arsenals on the other.

The Soviet Union and the US were bitter enemies with little economic or cultural engagement. Furthermore, the USSR was far less integrated with the global system, whereas the Chinese are intimately a part of global trade, travel, and institutions. China and the US are close trading partners, with Beijing being our 3rd largest goods trading partner as well as our top supplier for imports. As of May 2021, China owns the second most US debt, next to Japan. The next three are the UK, Ireland, and Luxembourg; these are all friendly countries. Furthermore, China has essentially pegged its domestic currency to the US Dollar, which comes with a plethora of benefits. Investopedia explains,

“A dollar-pegged yuan helps keep down the cost of Chinese exports, which the Chinese government believes makes it stronger in international markets. This also reduces the purchasing power of Chinese earners.”

Although many would argue that this gives the Chinese leverage over the US, the reality of the situation is that our economies are simply too interdependent. Both countries need each other economically and even if the Chinese attempted to sell off US debt in an act of economic warfare, the consequences on its end would also be substantial.

US foreign aid to China is also quite notable, with the Trump administration sending 17.8 tons of medical equipment to assist with the Covid-19 pandemic. China has also stepped up its humanitarian assistance with notable missions in the Global South such as Africa. CSIS notes notes,

“The U.S. Department of Defense recently noted that China’s expanding investments and activity in Africa “can be beneficial and welcome” if China adheres to international norms and operates with transparency.”

China is not an enemy but a rival for global leadership and prestige. In many ways, our two nations have cooperated on many issues like responsible members of the international community. We have our differences, whether that be the aforementioned competition for global influence or China’s internal human rights abuses in Xinjiang and Hong Kong. We should continue to push back in those areas. However, to treat this like a cold war which includes a complete decoupling and focus on a fight for survival would not only be premature but dangerous.

“Americans must not dismiss a rivalry inherent in China’s regional ascendancy and growing global power, but the United States should also seek to avoid a spiraling era of distrust in which both sides will lose.”

How Do We Approach a Rivalry

Hal Brands, the Henry Kissenger Distinguished Professor at Johns Hopkins School of Advanced International Studies, writes with Jake Sullivan, President Biden’s National Security Advisor, that China has two basic roads to global hegemony. The first is the most conventional approach, which is very similar to the path the US took to global superpower status. That is shoring up its Asian sphere of influence and using it as a springboard to push out into the rest of the world. Beijing is currently pursuing this goal by modernizing its military and establishing itself as the dominant military and economic hegemon in Asia. It is likely that military conquest of Taiwan would be one of the important steps in this strategy.

The second approach is simply competing for global hegemony through the use of soft power, which includes growing its economic importance worldwide and participating in international institutions. If Beijing can supplant the US as the most respected or feared country it will then be in a position to enact its will in reshaping the global order. China seems to be naturally engaging in both strategies.

Professor Leffler contends that this behavior is mostly associated with rational state behavior rather than an explicit plan to conquer the world. Furthermore, this two-pronged threat can be easily combated through relatively peaceful means. Firstly, although China wishes to create an Asian sphere of influence, that’s much easier said than done. Virtually every major power in the Indo-Pacific is adversarial to China’s expansionist intentions. Countries like Japan, a historical rival to China, are starting to get more assertive and rearm their militaries. India, a rising regional power with the potential to rival China, is increasingly aligning itself with the US and its interests. Then there are countries like South Korea and Australia that also possess notable military as well as economic clout. Both are also skeptical of China.

Furthermore, unlike the Soviet Union, which exported an ideologically pure and seductive Communist doctrine, the world mostly sees the Chinese as authoritarian and brutal. There is little appeal beyond the odd dictatorship here and there, to adopt the Chinese political model. There are no subversive and powerful advocacy groups in Western nations advocating for “Socialism with Chinese characteristics” like there were for traditional socialism. China’s prestige on the world stage is an uphill battle if it wishes to keep its authoritarian system.

The way the United States, which has an attractive and respected political model, can push back is to first regain the prestige it has lost in recent years due to domestic issues and belligerence on the world stage. Furthermore, it must engage in diplomacy, trade, and cooperation with diverse partners across the world to maintain its influence while creating strong coalitions to resist negative Chinese influence. At the same time, it must cooperate with China on areas of mutual interest such as combating piracy, terrorism, climate change, and restoring our previously fruitful economic relationship.

The end goal would be to reassure the world that the United States is the capable superpower that it always has been. To show the superiority of a free and open society while uniting all that uphold such values in solidarity. It must demonstrate, through diplomatic engagement and through its own example, that the world is better off following Washington, not Beijing.

Such a strategy understands the reality that we are not in an existential battle to the death, but rather a tense rivalry for global leadership. China’s vision of the world does not involve removing the United States or its ideology from existence; in many areas they actually want to cooperate. There are real challenges and problems that need to be confronted with China as the world would certainly be worse off if they were the dominant power. However, winning a great power rivalry requires a far different approach than winning a cold war. To suggest that there is no difference would be a dangerous miscalculation.

This article, Are We In a Cold War With China?, was originally published by the American Institute for Economic Research and appears here with permission. Please support their efforts.