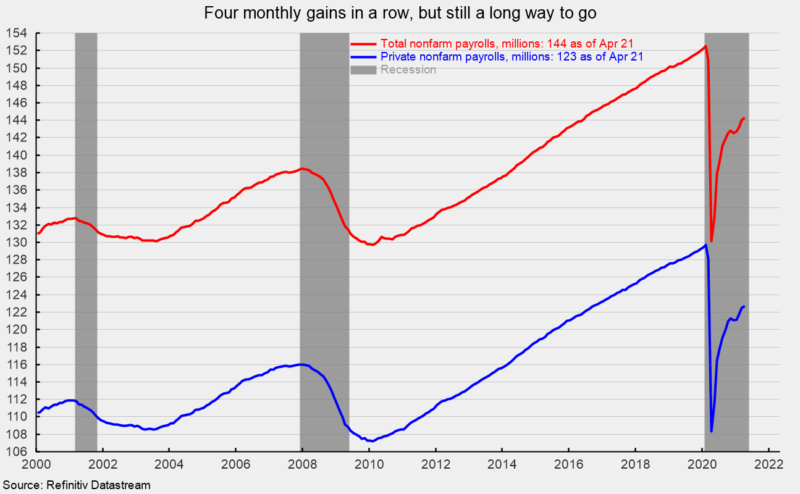 Despite the fourth consecutive gain, every private industry group still has fewer employees than before the government lockdowns. Leisure and hospitality leads with a loss of 2.8 million jobs followed by health care, down 828,000, and professional and business services with a drop of 748,000 (see third chart).

On a percentage basis, the losses are more evenly distributed. Leisure and hospitality still leads with a 16.8 percent drop since February 2020, mining and logging comes in second with an 10.9 percent loss followed by education services at 9.0 percent and information services at 7.8 percent. Five of the 14 private industries shown in the report have declines of 4 percent or more since February 2020 (see fourth chart).

The average workweek increased in April, rising 0.1 hours to 35.0 hours. Combining payrolls with hourly earnings and hours worked, the index of aggregate weekly payrolls gained 1.2 percent in April. The index is up 16.3 percent from a year ago.

The April jobs report shows a modest gain in private payrolls, concentrated in leisure and hospitality. Despite the disappointing result, other signs suggest the economic recovery from the government lockdowns in 2020 is gaining momentum as the restrictions on consumers and businesses are lifted. However, the damage done by the lockdowns was severe; for most private industries, employment is still below pre-pandemic levels, quite substantially below in some cases, and is likely to take a significant amount of time to fully recover.

This article, April Jobs Report Disappoints but The Outlook Remains Favorable, was originally published by the American Institute for Economic Research and appears here with permission. Please support their efforts.