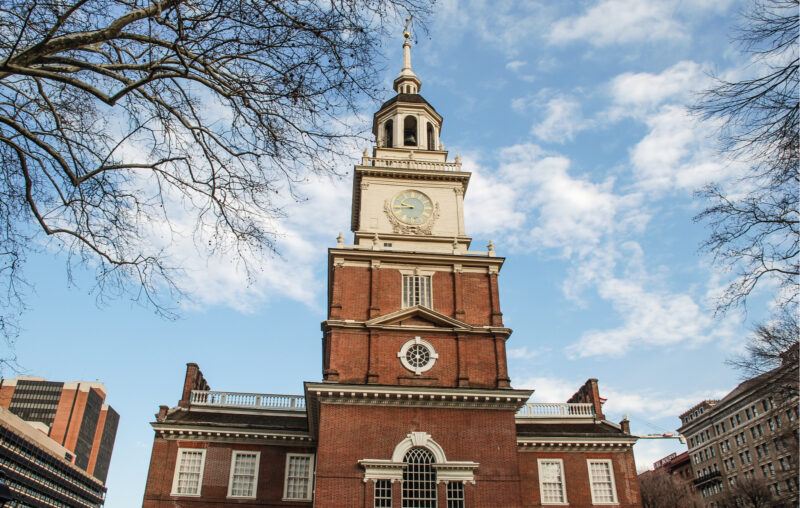 In recent years, Gordon Wood, arguably the greatest historian—living or dead—of the American founding, has become something of a punching bag in his field. This change in Wood’s reputation within the historical profession is not too surprising. The discipline is moving away from history as a liberal art and is rapidly transforming into just another ideologically driven social science obsessed with oppression and a weaponized past. Much like that of their Marxist predecessors, the answer to these new historians’ questions is always the same and always predetermined. For his part, Wood remains a committed champion of seeking objectivity and truth. As he explains in the introduction to his new book, Power and Liberty, “without a commitment to objective truth and the pastness of the past, the history of a nation becomes distorted, turns into politics by other means, and ends up becoming out-and-out partisan propaganda.” Not that Wood claims to be the possessor of “any final truth,” but he does seek an impartial truthfulness that would understand the past for its own sake, an attitude that is sorely lacking in much of the profession today.

Wood’s central contention in Power and Liberty is that the “Revolutionary era was the most creative period of constitutionalism in American history and of the most creative in modern Western history.” But the haphazard and chaotic nature of American constitutionalism is front and center. Its unruly nature contrasts sharply with the common perception that Americans of that era agreed on constitutional issues and embraced a destined experiment in democratic-republicanism.

It also contrasts with the emphasis Wood placed on ideas in his previous works. In his enormously influential Creation of the American Republic, for example, he presents the Founders as the inheritors and modifiers of the Western tradition. There, ideas maintained a central role in shaping American constitutional development. In Power and Liberty, however, he maintains that while “[i]t may be that sources of these constitutional achievements lay deep in Western history,” Americans adapted those ideas only as a consequence of actions and debate: they did not drive or shape events. Thus, Wood’s account now roots American constitutional development much more in the unexpected and unintentional consequences of human actions than a simple exemplification of Western political philosophy. Hence, when revolutionary Americans read and attempted to apply the teachings of Western political philosophy, they did so only as particular circumstances and purposes required.

The contextual nature of American constitutionalism illuminates its often confused and unsystematic evolution. Although Americans persisted in their arguments of no taxation without representation for an entire decade, 1765-1774, they struggled to explain how this principle played out in the British Empire. For a short time, they appealed to Parliament. When Parliament pushed back with an argument for virtual representation and parliamentary sovereignty, the colonies shifted their position, arguing for a distinction in parliamentary power between external regulation versus internal taxation. Parliament refused to see the difference and persisted in its sovereignty claims over the colonies. In 1774, the Americans moved to the extraordinary claim that sovereignty rested with the individual colonies. This final argument, which came only after exhausting all other constitutional arguments, severed the colonies’ relationship with Parliament and maintained that their connection to the King made them English. When the King refused to protect his colonies, the Americans believed they had no choice but to seek independence. This evolutionary process of constitutional thought had long-term and permanent consequences.

Although scholars and general readers often overlook state constitutions, Wood rightly claims that Revolutionary constitutions “were far more important in shaping Americans’ understanding of constitutionalism” than the 1787 federal constitution. They established what became the foundations of American constitutionalism: fundamental law versus statutory law, separation of powers, declarations of rights, weak executives, and independent judiciaries. Even though political philosophy influenced this process, there was no guarantee that any of these elements would have become essential to American constitutionalism had events played out differently.

The problem of democracy best exemplifies Wood’s emphasis on how unintended consequences shaped American constitutionalism. By unleashing pent-up democratic forces in colonial society, the break with Britain “turned out to be much more revolutionary and radical than many of the leaders expected.” One of the immediate results of this unexpected democratic movement was the growth of the powers of state legislatures. As more “middling legislators” took office, they wielded legislative power to promote their constituents’ parochial and narrow self-interests. These legislators seemed to care more about courting popular favor than supporting the common good, engaged in political logrolling and pork-barrel spending, drafted hastily written and poorly worded legislation, and passed paper money laws and debtor relief bills. In essence, Wood contends, “Localism was preventing legislators from looking after the general good of the states or the nation.” As majority factions of these self-interested legislatures came to power and exercised that power solely for their own good, the Revolution’s republican experiment seemed close to being subsumed by democratic excesses.

Nor could the Articles of Confederation help combat the problem. Wood offers the traditional argument on the “imbecility” of the Articles, claiming they were practically defunct from the start. As an “entirely different kind of union” in which the states retained their freedom, sovereignty, and independence, the Articles reflected the American argument of 1774 that sovereignty rested in the individual colonies/states. Nonetheless, unintended consequences reared their head. By the mid-1780s, even as states buckled under the weight of democratic excess, the lack of real central authority caused the international position of the United States to falter. Unable to pay its debt and unable to acquire the funds it needed to operate, the Confederation, much like the states that made up its membership, seemed on the brink of failure. The creation and ratification of the American Constitution, therefore, saved the Revolution from itself.

Once again decentering the role of political ideas, Wood considers the drafting of the Constitution more a response to the historical circumstances Americans found themselves in 1787 than a culmination of Western political thought or philosophical mediation. With “nearly everyone present” at the constitutional convention naturally “suspicious of state-based democracy,” the Constitution that emerged from the debates contained elements designed to restrain democracy while retaining the ability to self-govern but also strong enough to plant the U.S. on a stronger international footing.

Anti-Federalists, however, considered it an assault on the Revolution and a threat to local self-government. The nationalists (now Federalists) answered Anti-Federalist fears by claiming that a national popular sovereignty empowered the Constitution. With sovereignty resting in a national people, Federalists argued the people could divide power and authority between the federal and state governments any way they wished. Although popular sovereignty was not a new idea in 1787, its application on a national scale certainly was, demonstrating yet another constitutional development done not from forethought or theory but in response to a particular situation.

Although Americans often see the federal Constitution as the apogee of American constitutionalism, as Wood points out in his chapter on the rise of judicial independence, constitutional development remained susceptible to unintended consequences. The rise of the judiciary corresponded with the growing belief of the Founding era that constitutions represented a law more fundamental than statutory law. Therefore, an entity had to ensure that statutory law did not contradict written constitutions. The courts became that entity, and judicial review became their tool. While the Constitution does not explicitly grant courts the power of judicial review, Wood notes this power developed as a consequence of the increasing understanding that fundamental law required protection from legislative overreach. Hence, judicial review developed out of circumstance rather than premeditation.

In the last chapter, Wood explores the long-term social ramifications of the Revolution on American constitutionalism. Although the Revolution purposely embraced egalitarian beliefs, no one at the time realized the degree to which those beliefs would reshape American society and politics in the decades after the Revolution. Even here, Wood pulls back somewhat from the implication of his Pulitzer Prize-winning Radicalism of the American Revolution that embracing egalitarian beliefs was intended to transform the culture. Whether by design or not, these beliefs dismantled the aristocratic elements of American colonial society. Gone were the “patrilineal definitions of kinship,” replaced with the “equal rights of daughters and widows in the inheriting and possession of property.”

Just as important was the “great demarcation” between public and private spheres of life and governance. As society and government became disentangled, social rank lost its automatic connection to political power as “politics became more transparent, more open to ordinary people.” From the division of the public and private came new understandings of private property as a commodity to be bought and sold, expanded suffrage, the disestablishment of state-protected churches, and the end of state-sponsored corporate privileges. In short, this burst of republican egalitarianism “marked the transition to modernity.”

The chapter that will undoubtedly draw the most attention—and condemnation—from scholars covers the role of slavery in American constitutionalism. Wood clearly intends this chapter to answer the 1619 Project’s dubious claim the Revolution was fought to preserve slavery. Wood argues contra the 1619 Project that “the Revolution and anti-slavery were entwined and developed together.” Wood can make this compelling claim because he lets historical context and not theoretical constructs guide his argument. Wood acknowledges that most American colonists “initially took slavery for granted, felt no guilt over it, and simply accepted it as the lowest and meanest ranks in a complicated hierarchy of dependencies and statues of unfreedom.”

The Revolution, however, immediately changed this traditional view by exposing how slavery (and white servitude) seemed to contradict Americans’ egalitarian arguments. The consequence was that slavery “became conspicuous and reviled in ways that they had not been earlier.” As Wood rightly summarizes:

We should not lose sight of the immensity of what the Revolution accomplished. For the first time in the slaveholding societies of the New World, the institution of slavery was constitutionally challenged and abolished in northern states . . . and pointed the way toward the eventual elimination of the institution throughout not just the United States but the whole of the New World.

That slavery did not end throughout the United States, but, by the early nineteenth century, seemed to only entrench itself further in the South, is not evidence that the Revolution secured slavery, but rather the ironic and often tragic and frustrating nature of historical development.

Despite being a distillation of sixty years of research and writing, Liberty and Power demonstrates that Wood is still the consummate historian. Rather than being an ideologue locked into a permanent position, his changes in emphasis from his earlier works reveal a scholar who is willing to reconsider evidence and arguments. Wood’s emphasis on the historical rather than philosophical nature of American constitutionalism should serve as a critical reminder to those who wish to detach the American Founding from its historical contexts to claim it as a grand experiment in natural rights or as another entry into a perpetual philosophical debate.

There is no doubt that the oppression-mongers will take to Twitter to criticize Wood’s work as yet another example of how the elder statesman of the discipline refuses to acknowledge the “reality” of unrelenting oppression. I advise readers to ignore those screeds and read this book. You will not only see the vital role played by unintended or unexpected consequences in shaping American constitutional development, but also witness a master historian at work.

This article, America’s Unplanned Constitutional Tradition, was originally published by the American Institute for Economic Research and appears here with permission. Please support their efforts.

Outside the Box: Follow these 3 crucial lessons for weathering the stock market’s storm

The Moneyist: ‘I’m a man of simple pleasures’: I live with my girlfriend, 59, who owns several homes and has saved $3 million. I pay utilities and cable, and do repairs. Is that enough?