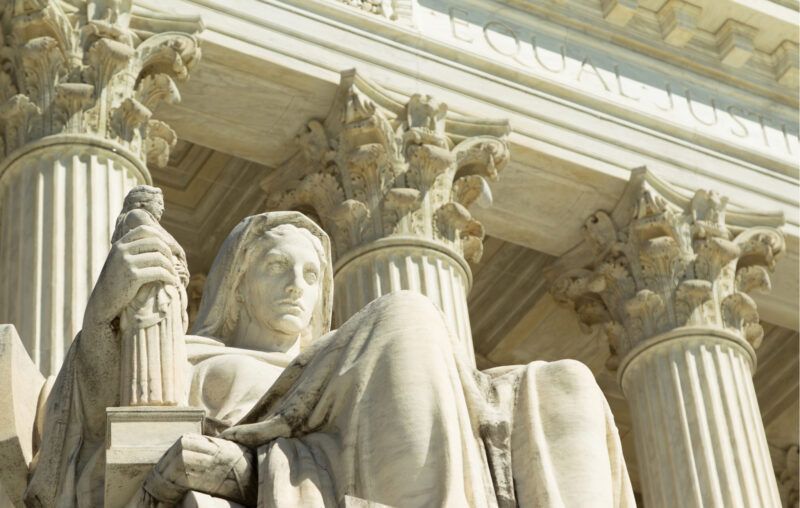 Seldom have Americans seen such blatant disregard for their property rights and the Constitution which is supposedly there to protect them as today.

It did so despite a recent Supreme Court ruling (echoing a series of lower court decisions) making it almost guaranteed that the extension would be overturned. Four Justices ruled it would be unconstitutional, period, but Justice Brett Kavanaugh, the key fifth vote, sided with liberals not to overturn it, not because it was constitutional, but because it was going to quickly expire. However, he also wrote that “clear and specific congressional authorization [i.e., new legislation] would be necessary for the CDC to extend the moratorium past July 31.”

No such legislation was forthcoming, but perhaps following Supreme Court authority Maxine Waters’ Twitter advice to just extend the moratorium by administrative fiat, because “Who’s going to stop them? Who is going to penalize them?” that is what they did. And a major excuse given was that even though it is probably going to be held unconstitutional, it “would take a while for the court to strike it down.” In other words, we know we are not able to do this with any semblance of fealty to our oaths to protect and defend the Constitution, but because judicial wheels turn slowly, we can at least continue to do whatever we want until then.

Bonnie Kristian did a good job of spelling out the consequent threat to our rights and Constitution in The Week. She wrote: “Willfully breaking the law and relying on judicial delay to get away with it is an awful approach to governance. It is lawlessness.” She also pointed out the cognitive dissonance with candidate Biden’s promised “aggressive action” to “maintain the rule of law and to bring integrity back to our justice system,” and how much damage an administration can do when so untethered.

This striking “civil disobedience” on the part of the Biden administration tells me that Americans need to give some long-neglected thought to civics. Not civics as is currently being practiced, but civics focused on defending the Constitution and the limited government it authorized, because of the tendency toward the abuse of political power not tightly controlled and the necessity of vigilance to keep democracy from overrunning our liberty.

In other words, we could benefit from James Fenimore Cooper, America’s first great national novelist, who wrote The American Democrat as a civics primer in 1838, reflecting America’s Founders rather than modern practice.

One of the major themes Cooper focused on was the need to combat abuse imposed by those who were politically dominant by absolutely respecting private property rights, as essential to any successful defense of our “right of self-government.”

Unfortunately, the erosion of property rights Cooper warned against in the Jacksonian era America has only accelerated. And the Biden administration has now shown its willingness to simply trample property rights in defiance of the Constitution. Few things could better illustrate Cooper’s emphasis that “vigilance in the protection of principles is even more necessary in a democracy.”

Since “property is the base of all civilization,” it follows that “its existence and security are indispensable to social improvement.” So “the first great principle connected with the rights of property is its inviolability,” leading to “the safe and just governing rule… permitting everyone to be the undisturbed judge of his own habits and associations, so long as they are innocent, and do not impair the rights of others to be equally judges for themselves.”

Given the foundational role of private property rights to effective social cooperation, Cooper concluded that for public policy, that meant property rights “shall have no factious political aids.” That denial of unequal treatment implies “it is a great mistake…to take sides with the public, in doubtful cases affecting the rights of individuals, as this is the precise form in which oppression is the most likely to exhibit itself in a popular government.”

That led Cooper to dissent from democratic orthodoxy that has only intensified since: “As between the public and individuals, therefore…take sides with the latter.”

Cooper connected this to individuality, which property rights protect. “Individuality…lies at the root of all voluntary human exertion…because we know that the fruits of our labors will belong to ourselves, or to those who are most dear to us.” Consequently, “all which society enjoys beyond the mere supply of its first necessities is dependent on the rights of property.” In other words, “property is an instrument of working most of the good that society enjoys,” because “it encourages and sustains laudable and useful efforts in individuals.” In sum, “Property is desirable as the groundwork of moral independence, as a means of improving the faculties, and of doing good to others, and as the agent in all that distinguishes the civilized man from the savage.”

The upshot of Cooper’s logic of liberty was that “man…is privileged to use his own means…in the pursuit of his own happiness, and they who would interfere with him, so far from appreciating liberty, are ignorant of its vital principles.” Unfortunately, that is radically at odds with “the habit of seeing the public rule,” which “is gradually accustoming the American mind to an interference with private rights that is slowly undermining the individuality of the national character.”

The American Democrat was a civics book. Unfortunately, it has long been the case that Americans have all but ignored those issues. However, the Biden administration has now shown in unmistakable terms just how seriously our civics failures threaten our rights, which are our liberties in action. So we would greatly benefit by remembering Cooper’s instruction that “All who love equal justice, and, indeed, the safety of free institutions, should understand that property has its rights, and the necessity of rigidly respecting them.” In fact, it would show that Biden and the party he leads—current American Democrats—fail the core civics lessons taught by The American Democrat.

This article, American Democrats—Then and Now, was originally published by the American Institute for Economic Research and appears here with permission. Please support their efforts.