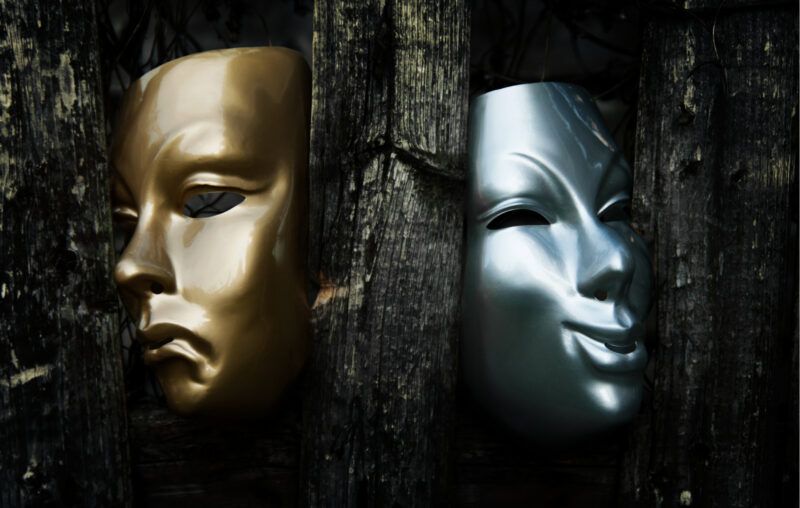 The friends of freedom must recognize the verbal charades that sway people to surrender their rights and liberties. The political establishment and its media allies are continually abusing the English language to lull people into submission.

From pupils being required to recite the Pledge of Allegiance at the start of each school day to adults being endlessly hectored to vote, Americans are injected with demands for obedience almost from womb to tomb. It is not enough to obey: Americans are supposedly obliged to view the current regime as the incarnation of “the will of the people.”

Journalist and author Ambrose Bierce offered a barrage of antidotes to this servile claptrap. Many people are familiar with Bierce’s definition of cynic — “a blackguard whose faulty vision sees things as they are, not as they ought to be.” But Bierce’s writing had a much sharper political edge than is usually recognized nowadays.

H.L. Mencken commented that Ambrose Bierce was the “one genuine wit” that America had produced as of the early 1900s. Mencken summarized Bierce’s career:

Doomed to live in a country in which, by God’s will, honesty is rare and courage is still rarer and honor is almost unknown…. he fell upon the mountebanks, great and small, in a Berserker fury, thus to sooth and secure his own integrity. That integrity, as far as I can make out, was never betrayed by compromise. Right or wrong, he always stuck to the truth as he saw it.

A berserker of truth

Few American writers have punctured more political pretenses than Ambrose Bierce. Bierce was a Union officer in the Civil War and almost died from his wounds at the Battle of Kennesaw Mountain in 1864. His short stories offered a joltingly realistic view of the pervasive death and folly in almost every battle.

Bierce’s biggest contribution to starkly perceiving political reality was The Devil’s Dictionary, first published in 1911. Mencken said that book contained “some of the most devastating epigrams ever written.” Bierce offered plenty of piercing insights that can be profitably studied by today’s friends of freedom.

Bierce defined “politics” as “a strife of interests masquerading as a contest of principles. The conduct of public affairs for private advantage.” His definition of “politician” was more scathing: “An eel in the fundamental mud upon which the superstructure of organized society is reared…. As compared with the statesman, he suffers the disadvantage of being alive.” He defined “sorcery” as “the ancient prototype and forerunner of political influence.” Similarly, he defined “degradation” as “one of the stages of moral and social progress from private station to political preferment.”

Bierce’s definition of “freedom” was sounder than that offered by most political philosophers: “Exemption from the stress of authority in a beggarly half dozen of restraint’s infinite multitude of methods.” Bierce followed that definition with a brief poem:

Freedom screams whenever monarchs meet,
And parliaments as well,
To bind the chains about her feet
And toll her knell.

And when the sovereign people cast
The votes they cannot spell,
Upon the pestilential blast
Her clamors swell.

For all to whom the power’s given
To sway or to compel,
Among themselves apportion Heaven
And give Freedom Hell.

Bierce failed to swoon for the tub-thumping for democracy that was sweeping America in his time. See, for instance, his definition of “vote”: “The instrument and symbol of a freeman’s power to make a fool of himself and a wreck of his country.” Bierce defined “referendum”: “A law for submission of proposed legislation to a popular vote to learn the nonsensus of public opinion.” In his definition of “multitude,” he commented, “A multitude is as wise as its wisest member if it obey him; if not, it is no wiser than its most foolish.” He defined “rabble”: “In a republic, those who exercise a supreme authority tempered by fraudulent elections.” Luckily, we don’t have to worry about that happening nowadays in the United States.

Bierce had as much if not more contempt for monarchy. “Prerogative” was merely “a sovereign’s right to do wrong.” In his definition of “absolute,” he observed, “An absolute monarchy is one in which the sovereign does as he pleases so long as he pleases the assassins.” That parallels his definition of “abdication”: “An act whereby a sovereign attests his sense of the high temperature of the throne.”

In the late 1800s and early 1900s, during Bierce’s heyday as a journalist, protectionism was ascendant, and politicians perpetually lied about the benefits of closing America off from the world with high tariffs. Bierce provided one of the best definitions of a “tariff”: “A scale of taxes on imports, designed to protect the domestic producer against the greed of his consumer.” He complimented that with an apt definition of “harbor”: “A place where ships taking shelter from storms are exposed to the fury of the customs.”

Having almost died in a war spurred by the secession of southern states, Bierce had a jaded view of the animosity spurred by artificial demarcations. He defined “boundary”: “In political geography, an imaginary line between two nations, separating the imaginary rights of one from the imaginary rights of the other.” To comprehend the potential mischief of such lines, check his definition of “cannon”: “An instrument employed in the rectification of national boundaries.”

Bierce saw many fellow soldiers perish pointlessly due to the follies of ambitious or half-witted generals. Perhaps that spurred his definition of “patriotism”: “Combustible rubbish ready to the torch of any one ambitious to illuminate his name.” That was on par with his definition of “flag”: “A colored rag borne above troops and hoisted on forts and ships. It appears to serve the same purpose as certain signs that one sees on vacant lots in London — ‘Rubbish may be shot here.’” The same sentiment echoes in his definition of “history”: “An account, mostly false, of events, mostly unimportant, which are brought about by rulers, mostly knaves, and soldiers, mostly fools.”

Bierce recognized the arbitrariness of political legitimacy. He defined “rebel”: “A proponent of a new misrule who has failed to establish it.” That echoes the judgment of Napoleon, who declared, “Treason is a matter of dates.”

Bierce saw through the sentimental claptrap that afflicts many commentators on public affairs. He defined “lawful”: “Compatible with the will of a judge having jurisdiction.” And then there was his definition of “lawyer”: “One skilled in circumvention of the law.” Close by was his definition of “liar”: “a lawyer with a roving commission.” Perhaps even better was his definition of “trial”: “A formal inquiry designed to prove and put upon record the blameless characters of judges, advocates and jurors.” His skepticism extended to policemen’s nightsticks, as he defined “arrest”: “formally to detain one accused of unusualness.” But he had no blind faith in some of the usual remedies, defining “habeas corpus” as “a right by which a man may be taken out of jail when confined for the wrong crime.”

Bierce penetrated the prevailing bosh on foreign relations with his definition of “ultimatum”: “In diplomacy, a last demand before resorting to concessions.” He nailed “alliance”: “In international politics, the union of two thieves who have their hands so deeply inserted in each other’s pocket that they cannot separately plunder a third.” His definition of “consul” reverberates in our time with all the ambassadors who have bought their posts with lavish campaign contributions: “In American politics, a person who having failed to secure an office from the people is given one by the Administration on condition that he leave the country.”

Bierce lived at a time when governments were beginning to demand that people “show their papers.” He defined “passport”: “A document treacherously inflicted upon a citizen going abroad, exposing him as an alien and pointing him out for special reprobation and outrage.”

For a surefire gauge to understand foreign conflicts, see Bierce’s definition of “peace”: “In international affairs, a period of cheating between two periods of fighting.” Bierce died before the First World War, but his epigram could have provided a lodestar for the villainy of that era.

Bierce disdained most political activists. He defined “conservative” as “a statesman who is enamored of existing evils, as distinguished from the Liberal, who wishes to replace them with others.” Bierce did vehemently attack the robber barons who were afflicting the nation with crony capitalism in his time.

As excellent profile by journalist Andrew Ferguson noted that Bierce’s “one abiding principle was a horror of socialism. Capitalism alone could accommodate human striving and ambition.” Bierce defined “grapeshot” as “an argument which the future is preparing in answer to the demands of American Socialism.” In his 1910 pamphlet, “The Socialist — What He Is, and Why,” Bierce declared, “the [socialist] ‘movement’ as a social and political force is, in this country, born of envy, the true purpose of its activities, revenge. In the shadow of our national prosperity it whets its knife for the throats of the prosperous. It unleashes the hounds of hate upon the track of success.”

Bierce saved some of his tartest comments for his own profession. He defined “reporter”: “A writer who guesses his way to the truth and dispels it with a tempest of words.” Bierce spent many years as a newspaper editor in San Francisco, spurring this definition of “editor”: “A person who is a severely virtuous censor, but so charitable withal that he tolerates the virtues of others and the vices of himself; who flings about him the splintering lightning and sturdy thunders of admonition till he resembles a bunch of firecrackers petulantly uttering his mind at the tail of a dog.” His definition of “proof-reader” will warm the heart of many writers whose copy has been mangled beyond recognition: “A malefactor who atones for making your writing nonsense by permitting the compositor to make it unintelligible.”

Bierce offered many superb one liners on other topics. Here are a few of his best:

“Positive, adj. Mistaken at the top of one’s voice.
“Hurry, n. The dispatch of bunglers.
“Impiety, n. Your irreverence to my deity.
“Zeal, n. A passion that goeth before a sprawl.
“Truthful, adj. Dumb and illiterate.
“Rum, n. Generically, fiery liquors that produce madness in total abstainers.
“Ghost, n. The outward and visible sign of an inward fear.
“Prophecy, n. The art and practice of selling one’s credibility for future delivery.
“Patience, n. A minor form of despair, disguised as a virtue.
“Saint, n. A dead sinner revised and edited.
“Self-evident, adj. Evident to one’s self and to nobody else.
“Urbanity, n. The kind of civility that urban observers ascribe to dwellers in all cities but New York.

Apparently, New Yorkers had a dubious reputation even a hundred years ago.

Freedom fighters need all the comic relief they can find. The laughs that Bierce delivers are combined with lines that pierce perpetual political frauds now more than ever.

This article, Ambrose Bierce’s Pro-Freedom Cynicism, was originally published by the American Institute for Economic Research and appears here with permission. Please support their efforts.