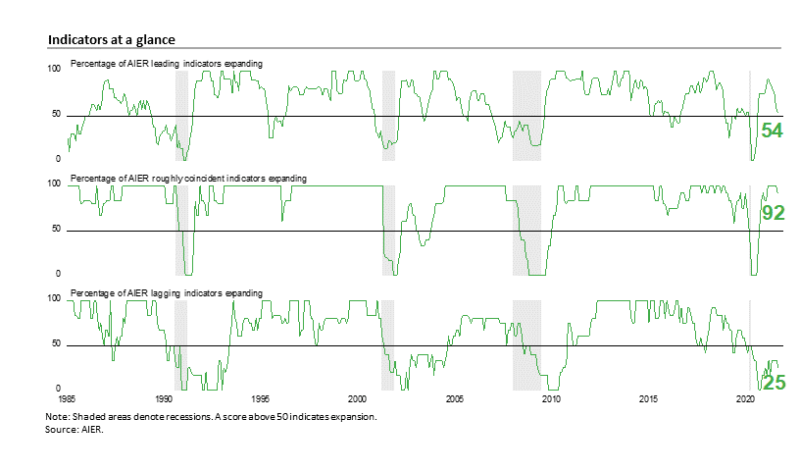 The resurgence in Covid cases has become a significant headwind and is compounding difficult labor conditions, shortages of materials, and lingering logistical issues. These issues continue to exert upward pressure on prices. Furthermore, outbreaks of the Coronavirus combined with rising prices are having an impact on consumers and may result in a retrenchment in consumer spending. Risks to the outlook are substantial, but for now, continued economic expansion, albeit at a slower pace, remains the likely path.

The AIER Leading Indicators index posted a sixth consecutive decline in September, coming in at 54 versus 58 in August. The index is now down a total of 38 points from the recent high of 92 in March. September is the thirteenth consecutive month above the neutral 50 level, but it is also the lowest reading over that period and the lowest since September 2020 when the index was just 21. The index is slightly above the neutral 50 threshold and suggests continued economic expansion, but the string of declines and close-to-neutral reading also suggests that sources of growth will likely start to narrow in coming months and that the pace of growth could slow as well.

Among the 12 leading indicators, six were in a positive trend in September with five trending lower and one trending flat or neutral. Just one of the 12 leading indicators changed direction in September. The University of Michigan Survey of Consumers Consumer Expectations Index turned from a neutral trend to a negative trend. The index dropped from a positive trend to a neutral trend in August. The back-to-back declines were significant in magnitude and broad in coverage. The August drop was entirely attributable to the fears associated with the resurgence in Covid cases while the September decline was associated with rising prices and declining perceptions of future economic prospects (see more below).

Overall, the Leading Indicators index posted another drop in September but remained slightly above the neutral 50 level. It was the thirteenth consecutive month above 50 but the lowest level over that period. The results suggest continued expansion is likely but the breadth of sources of growth are likely to narrow in coming months and the pace of growth could slow. Over the last 13 months, the leading indicators index has averaged 75.3 but the 38-point drop over the last six months from the recent high of 92 in March is a troubling sign. The ongoing disruptions to labor supply and production, rising costs and shortages of materials, and logistics and transportation bottlenecks are putting upward pressure on prices and impacting consumer sentiment. These issues are likely to be resolved over time and are unlikely to result in a 1970s-style price spiral, but the extended period of adjustment is likely to sustain an elevated level of risk for the economy.

AIER’s Lagging Indicators index fell to a weak reading of 25 in September. That was the 21st consecutive month at or below neutral. The average over the last 21 months is 28.6. Composite short-term interest rates fell from a positive trend to a neutral trend in the latest month leaving four indicators with unfavorable trends, one indicator with a favorable trend and one in a neutral trend.

The final September results from the University of Michigan Surveys of Consumers show overall consumer sentiment rose slightly in September following back-to-back declines in July and August. The August plunge was largely a result of growing fears of the recent surge in Covid. According to the report, “Consumer sentiment edged upward in late September, although the overall gain still meant the continuation of depressed optimism, initially sparked by the Delta variant and supported by persistent inflation and unfavorable long-term prospects for the national economy.”

Overall consumer sentiment increased to 72.8 in September, up from 70.3 in August, a 3.6 percent gain. From a year ago, the index is down 9.5 percent.

The current-economic-conditions index rose to 80.1 from 78.5 in August. That is a 2.0 percent rise and leaves the index with an 8.8 percent decrease from September 2020.

The second sub-index — that of consumer expectations, one of the AIER leading indicators — regained 3.0 points or 4.6 percent for the month, rising to 68.1.

With regard to the economic outlook, the report adds, “Consumers do not view economic conditions as conducive to establishing an inflationary psychology, a self-fulfilling prophecy. Instead, consumers have favored postponement due to what they still consider a transient spike in prices. While this reaction may well fade in the months ahead, the shift toward postponement of purchases has been so significant that it could not be quickly reversed.”

The weaker readings in consumer sentiment reflect the one-two punch of the sharp rise in new Covid cases and the sticker shock of higher consumer prices. The surge in new Covid cases may be easing already. However, the higher prices for many consumer goods, resulting from shortages of materials, a tight labor market, and logistical issues, are likely to linger for a while. Deferring purchases under the belief that price pressures are transient will help reduce pressures more quickly.

Consumers’ Views of the Economy Fell in September

The Consumer Confidence Index from The Conference Board fell again in September, falling 5.9 points or 5.1 percent to 109.3. September was the third decline in a row and puts the index 19.6 points below the June 2021 peak. From a year ago, the index is up 8 points or 7.9 percent.

Both major components of the index fell for the month. The present-situation component decreased 5.5 points to 143.4 while the expectations component lost 6.2 points, taking it to 86.6. The details of the report suggest that consumers have become less optimistic about current economic conditions as well as future growth prospects.

According to the report, “Concerns about the state of the economy and short-term growth prospects deepened, while spending intentions for homes, autos, and major appliances all retreated again.” The report adds, “Consumer confidence is still high by historical levels—enough to support further growth in the near-term—but the Index has now fallen 19.6 points from the recent peak of 128.9 reached in June. These back-to-back declines suggest consumers have grown more cautious and are likely to curtail spending going forward.”

Expectations for future income deteriorated as well with 17.3 percent expecting an increase, down from 18.2 in August, while 11.5 percent expect a decrease, up from 9.9 in August. Those results put the net percentage expecting an increase at 5.8 percent, down 2.5 points from 8.3 in August. As noted earlier, future buying plans softened as percentages for buying a home, auto, or major appliance all fell in the latest month.

Consumers are growing more concerned about economic conditions and growth prospects, largely due to the recent surge in new Covid cases. While the outlook is for continued expansion, uncertainty remains elevated. Lingering effects of the pandemic including shortages of materials, labor difficulties and logistical problems are sustaining upward pressure on prices as demand outpaces restrained supply. Repeated waves of new Covid cases could disrupt economic activity in the future.

Initial claims for regular state unemployment insurance totaled 362,000 for the week ending September 25, a rise of 11,000 from the previous week’s tally of 351,000. Initial claims have risen for three consecutive weeks and four of the last six weeks, putting the latest week at the highest level since August 7.

The four-week average rose 4,250 to 340,000, matching the number from September 4th and breaking a string of six consecutive declines. The recent surge in new Covid cases continues to be a setback for some parts of the economy.

The number of ongoing claims for state unemployment programs totaled 2.501 million for the week ending September 11, a rise of 134,295 from the prior week and the first increase since August 14. State continuing claims have risen just twice in the last nine weeks and have been below 3 million for eight consecutive weeks.

The latest results for the combined Federal and state programs put the total number of people claiming benefits in all unemployment programs, including all emergency programs, at 5.028 million for the week ended September 11, a fall of 6.223 million from the prior week.

The labor market remains tight with the number of open jobs hitting a new record high in July. However, the recent surge in new Covid cases creates uncertainty and may be resulting in some additional layoffs despite the tight market. Businesses and consumers are adapting to the new Covid world, but the waves of new cases will continue to create uncertainty for the economic outlook.

Everyday Price Index Rises at a Slower Pace in August

The AIER Everyday Price Index increased by 0.4 percent in August, half the pace of the 0.8 percent gain in each of the prior three months and the first month with less than a 0.5 percent rise since November 2020. The most recent rise puts the 12-month gain at 6.8 percent, the fifth month in a row above 6 percent and the fastest pace since September 2011.

The Everyday Price Index including apparel, a broader measure that includes clothing and shoes, rose 0.5 percent following three consecutive 0.7 percent monthly gains. Over the past year, the Everyday Price Index including apparel is up 6.6 percent, the fourth month in a row above 6 percent. Apparel prices jumped 1.8 percent on a not-seasonally-adjusted basis in August. Apparel prices tend to be volatile on a month-to-month basis, posting six increases and six decreases ranging from -2.2 percent to 2.9 percent over the last 12 months. From a year ago, apparel prices are up 4.2 percent.

The Consumer Price Index, which includes everyday purchases as well as infrequently purchased, big-ticket items and contractually fixed items, rose 0.2 percent on a not-seasonally-adjusted basis in August. Over the past year, the Consumer Price Index is up 5.3 percent versus 5.4 percent for the 12 months ending July.

Used car and truck prices fell 1.5 percent for the month but have increased 31.9 percent over the past year. Used cars and trucks prices had been one of the goods that have seen prices surge during the pandemic.

Prices for many goods and services in the economy continue to be distorted by lingering effects from government restrictions on consumers and businesses including shortages, logistical and supply chain issues, and labor problems. As activity returns to normal, supply and demand will adapt and likely lead to slower price increases, but it may take some time before the economy completely returns to normal functioning. Nevertheless, a 1970s-style upward price spiral remains unlikely.

The AIER Leading Indicators index posted a sixth consecutive drop in September, coming in at 54 versus 58 in August. The September result remains slightly above the neutral 50 threshold and suggests continued economic expansion in the months ahead. However, the string of declines since the March high also suggest that sources of growth may narrow in coming months and the pace of growth could slow as well.

The Roughly Coincident Indicators index fell in September but has been above the neutral 50 level for 12 consecutive months. The solid performance of the Roughly Coincident Indicators index since the government-induced recession of 2020 reflects the broad-based economic recovery but the continued weakness in the Leading Indicator Index raises the likelihood of some additional setbacks in coming months.

AIER’s Lagging Indicators index remained weak, falling further below the neutral 50 level. September was the 21st consecutive month at or below neutral. Overall, four indicators remained in an unfavorable trend, with one in a favorable trend and one in a neutral trend.

The combination of the recent surge in new cases and rising consumer prices continues to impact consumer attitudes and economic activity. For now, the outlook is for continued economic expansion, but the risks to growth are significant. Though a 1970s-style price spiral remains unlikely, the resurgence in Covid is exacerbating ongoing labor difficulties (including a lack of qualified workers, absenteeism, temporary shutdowns, and inability to retain talent), materials shortages, and logistical and transportation bottlenecks, sustaining upward pressure on prices. Fading consumer sentiment may lead to a retrenchment in spending, putting growth at risk. Caution is warranted.

This article, All Three AIER Business Cycle Indicators Weaken in October, was originally published by the American Institute for Economic Research and appears here with permission. Please support their efforts.