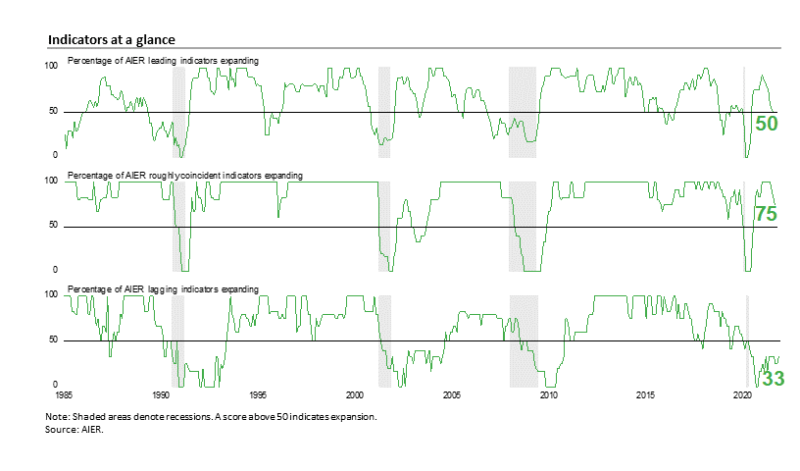 The string of declines in the Leading Indicators Index that began in April suggests that risks remain elevated and that some caution is warranted. While the neutral results for October and November are still a long way from signaling a significant risk of recession, the resurgent waves of Covid and difficulties hiring employees are prolonging ongoing materials shortages, production constraints, and logistical and transportation bottlenecks. These issues are sustaining significant upward pressure on prices.

Sustained upward pressure on prices and continued waves of new Covid cases are weighing on consumers’ attitudes. Despite the impacts, retail sales remain strong and suggest consumers remain resilient. That resiliency is supported by a tight labor market. Overall, the outlook is for continued economic expansion but with elevated risks from sustained upward price pressures and waves of new Covid cases.

The AIER Leading Indicators index held steady in November, holding at the neutral 50 level. However, the index is still down 42 points from the recent high of 92 in March. November is the fifteenth consecutive month at or above the neutral 50 level, but it is also the lowest reading over that period and the lowest since August 2020 when the index was just 21. Breaking the string of declines since March and holding steady in the latest month is a positive sign. However, two months at the neutral 50 mark still suggests caution.

Among the 12 leading indicators, six were in a positive trend in November and six were trending lower with none trending flat or neutral. Initial claims for unemployment benefits, real retail sales, manufacturing and trade sales to inventory ratio, real new orders for core capital goods, real stock prices, and debit balances in margin accounts were the six indicators maintaining favorable trends while the average workweek in manufacturing, the University of Michigan Index of Consumer Expectations, real new orders for consumer goods, total heavy truck unit sales, the Treasury yield spread, and housing permits all remained in unfavorable trends.

Continued waves of new Covid cases continue to challenge businesses as they remain focused on improving supply chains and expanding production. Ongoing disruptions to labor supply and production, rising costs and shortages of materials, and logistics and transportation bottlenecks continue to exert upward pressure on prices. These issues are likely to be resolved over time but each new wave of Covid cases delays a return to pre-pandemic conditions. An extended period of adjustment is likely to sustain upward pressure on prices and a somewhat elevated level of risk for the economy.

As expected with the deteriorating strength of the Leading Indicators Index, the Roughly Coincident Indicators index fell for the third consecutive month in November. Furthermore, some additional weakness over the coming months is possible. The Roughly Coincident Indicators index came in at 75 in November, down from 83 in October continuing a run of 14 consecutive months above neutral, posting an average reading of 91.7. Despite the third monthly drop, the still-solid results of the roughly coincident indicators remain a favorable sign.

One indicator changed its signal in November as the consumer confidence in the present situation indicator fell from a positive trend to a neutral trend. Overall, four indicators were trending higher while one was trending lower, and one was in a neutral trend.

Private payrolls posted a 235,000 gain in November after a 628,000 increase in October and 424,000 addition in September. Both months were revised up from their original estimates. The November rise in private payrolls is also the 11th in a row and 18th in the last 19 months. The November addition brings the 11-month gain to 5.664 million and the 19-month recovery to 18.376 million versus a combined loss of 21.353 million in March and April of 2020, leaving private payrolls 2.977 million or about 2.3 percent, below the February 2020 peak.

The recovery in payroll employment continues to be erratic, with large additions in some months but small increases in other months (and a loss in December 2020; see second chart). The 235,000 increase to private payrolls in November was about half (52 percent) of the 449,000 monthly average increase over the last 12 months. Resurgent waves of new Covid cases and deviations from typical hiring patterns in some industries that throw off seasonal adjustment are both likely contributors to the volatility.

After 19 months of recovery, only two of the major private industry groups have more employees than before the government lockdowns – transportation and warehousing is 3.6 percent above the February 2020 level and financial activities is 0.3 percent above. Two industries – Leisure and hospitality (-7.9 percent) and mining and natural resources (-6.5 percent) – are still down more than five percent.

The average workweek rose 0.1 hour to 34.8 hours in November. Combining payrolls with hourly earnings and hours worked, the index of aggregate weekly payrolls gained 0.7 percent in November. The index is up 9.5 percent from a year ago.

The participation rate increased by 0.2 percentage points in November, coming in at 61.8 percent versus a participation rate of 63.3 percent in February 2020. The employment-to-population ratio, one of AIER’s Roughly Coincident indicators, came in at 59.2 for November, up from 58.8 in October but still significantly below the 61.1 percent in February 2020.

Initial claims for regular state unemployment insurance rose to 222,000 for the week ending November 27, an increase of 28,000 from the previous week’s revised multidecade low of 194,000. Despite the rise, claims remain close to the pre-pandemic average level of 212,000 for January and February 2020.

The current four-week average fell for an eighth consecutive week, coming in at 238,750, the lowest level of the recovery. The results suggest the labor market remains extremely tight.

Continuing claims in all federal programs totaled just 482,536 for the week ending November 13, a decrease of 24,190. The drop was concentrated in the Pandemic Unemployment Assistance program where claims fell 19,943. A loss of another 5,107 was from the Pandemic Emergency UC program.

The latest results for the combined Federal and state programs put the total number of people claiming benefits in all unemployment programs, including all emergency programs, at 2.306 million for the week ended November 13, a rise of 21,564 from the prior week.

The total job openings rate, openings divided by the sum of jobs plus openings, fell to 6.6 percent in September from 6.7 percent in August while the private-sector job-openings rate dropped to 7.1 percent from 7.2 percent.

The number of private-sector quits was 4.217 million, a record high, versus 4.087 million in August. Leisure and hospitality led with 987,000 quits followed by trade, transportation, and utilities with 984,000 quits and professional and business services with 706,000.

The quits rates among the private-sector industry groups is still dominated by leisure and hospitality with a rate of 6.4 percent, well ahead of the number two, trade transportation, and utilities, with a 3.6 percent quits rate and number three, professional and business services, with a 3.3 percent rate.

From the worker perspective, labor market conditions remained very favorable in September. The number of openings per job seeker (unemployed plus those not in the labor force but who want a job) ticked down slightly to 0.770 in September from 0.776 in August and a record high 0.782 in July.

The Consumer Confidence Index from The Conference Board declined slightly in November but remains at historically moderate levels. The overall index fell 2.1 points or 1.9 percent to 109.5. From a year ago, the index is up 17.9 percent.

Both major components of the index fell for the month. The present-situation component decreased 3.0 points to 142.5 while the expectations component lost 1.4 points, taking it to 87.6. The total index and both components remain well above typical recession lows but also remain below record highs. The details of the report suggest that inflation fears and new Covid cases were the primary reasons for the decline.

According to the report, ““Expectations about short-term growth prospects ticked up, but job and income prospects ticked down. Concerns about rising prices—and, to a lesser degree, the Delta variant—were the primary drivers of the slight decline in confidence.” The report adds, “Meanwhile, the proportion of consumers planning to purchase homes, automobiles, and major appliances over the next six months decreased.”

Retail sales and food-services spending rose 1.7 percent in October following a 0.8 percent gain in July and a 1.2 percent increase in August.  The three-month annualized growth rate over that span is a very strong 15.8 percent. The increases put total retail sales at a new record high and well above the pre-pandemic trend.

Core retail sales, which exclude motor vehicle dealers and gasoline retailers, posted a strong 1.4 percent increase for the month, following gains of 0.5 percent in September and 2.2 percent in August, leaving that measure with a 17.6 percent annualized growth rate over the past three months. Core retail sales are at a new record high and well above the pre-pandemic trend.

Most categories were up in October with ten posting gains, two showing declines, and one essentially unchanged. The gains were led by a 4.0 percent increase in nonstore store (primarily online) retailers, followed by gasoline station sales (up 3.9 percent) and electronics and appliance retailers, up 3.8 percent. Gasoline sales often reflect large price movements; the average price for a gallon of gasoline rose 3.5 percent in October.

The two categories showing drops in October were clothing and accessory stores, down 0.7 percent, and health and personal care stores (off 0.6 percent). Food services and drinking places (restaurants) were essentially unchanged for the month.

Nonstore retailers had been growing at a strong rate prior to the pandemic (9.1 percent annualized over the ten years through December 2019). However, over the past 18 months, the annualized growth rate accelerated, hitting an extraordinary 12.7 percent as of October. The strong performance has pushed the nonstore sales share of core retail sales from 17.2 percent for December 2019 to 20.0 percent for October.

This article, AIER Leading Indicators Index Holds at the Neutral 50 Mark, was originally published by the American Institute for Economic Research and appears here with permission. Please support their efforts.