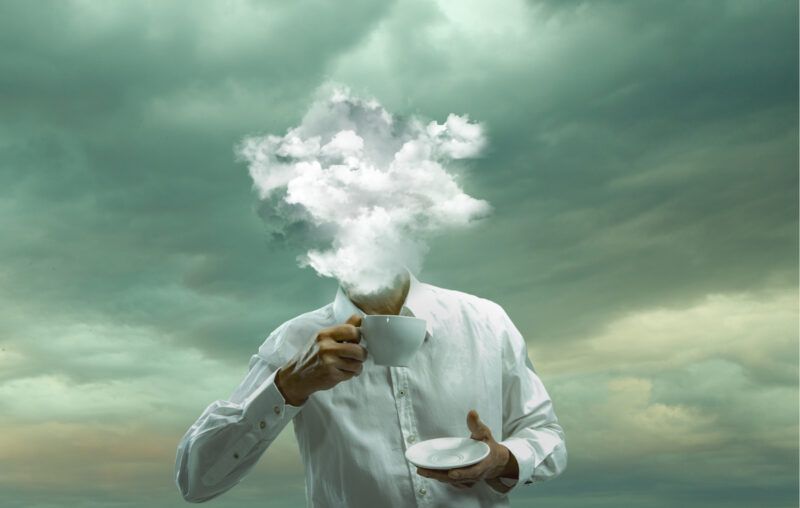 The University of Virginia Center for Politics, led by Larry Sabato, provides polling results that show deep social, political, and psychological divides between Biden voters and Trump voters. Nowadays, it is common to think that large swaths of other people must be in denial.

In the old days, we argued good policy. Now we theorize one another.

Adam Smith had things to say about denial and self-deceit. Here I draw exclusively from The Theory of Moral Sentiments. Applications are in your hands—and breast.

The resolution comes by allowing a Jim1 separate from a Jim2, and allowing that Jim2 does not have the same knowledge as Jim1.

Jonathan Haidt speaks of subconscious activity as the elephant in the brain, and of consciousness as the rider, who fancies that he’s steering the elephant. But the rider might do little more than rationalize where the elephant has taken him. My colleague at George Mason University, Robin Hanson, has applied the idea pervasively in his coauthored book The Elephant in the Brain: Hidden Motives in Everyday Life.

It is now well known that brain activity is divided and disjointed. As noted by Iain McGilchrist 187), scholars now say that consciousness accounts for no more than five percent of brain activity, and perhaps as little as one percent.

In discussing self-judgment, Smith writes: “I divide myself, as it were, into two persons… The first is the judge; the second the person judged of” (113.6). He spoke of the conscience as “the man within the breast” and “the supposed impartial spectator.” Sometimes our conscience nags us, as though one part of our being sees something that our conscious mind has not faced up to.

Smith said we reflect on our own conduct and try to discern general rules of proper conduct, but Smith never said that there is a surefire method of discerning the rules of virtue. He never said the man within the breast knows virtue very well. He never said the man within the breast communicates effectively with our active, conscious self. He allowed that one part of Jim might deceive another part of Jim.“When we are about to act,” Smith wrote, “the eagerness of passion will seldom allow us to consider what we are doing with the candour of an indifferent person.” Smith continues:

The violent emotions which at that time agitate us, discolour our views of things, even when we are endeavouring to place ourselves in the situation of another, and to regard the objects that interest us in the light in which they will naturally appear to him. The fury of our own passions constantly calls us back to our own place, where every thing appears magnified and misrepresented by self-love. (157.3)

“When the action is over,” he says, “and the passions which prompted it have subsided, we can enter more coolly into the sentiments of the indifferent spectator.” But even after the action is over, we remain very sensitive about our prior conduct. By no means do we face up to our track-record with candor:

The opinion which we entertain of our own character depends entirely on our judgment concerning our past conduct. It is so disagreeable to think ill of ourselves, that we often purposely turn away our view from those circumstances which might render that judgment unfavourable. He is a bold surgeon, they say, whose hand does not tremble when he performs an operation upon his own person; and he is often equally bold who does not hesitate to pull off the mysterious veil of self-delusion which covers from his view the deformities of his own conduct. Rather than see our own behaviour under so disagreeable an aspect, we too often, foolishly and weakly, endeavour to exasperate anew those unjust passions which had formerly misled us; we endeavour by artifice to awaken our old hatreds, and irritate afresh our almost forgotten resentments: we even exert ourselves for this miserable purpose, and thus persevere in injustice, merely because we once were unjust, and because we are ashamed and afraid to see that we were so. (157-158.4, boldface added)

In order to pervert the rectitude of our own judgments concerning the propriety of our own conduct, it is not always necessary that the real and impartial spectator [that is, a flesh-and-blood friend who is impartial] should be at a great distance. When he is at hand, when he is present, the violence and injustice of our own selfish passions are sometimes sufficient to induce the man within the breast to make a report very different from what the real circumstances of the case are capable of authorizing. (156-157.1)

Those two sentences are the extent of Smith’s play-by-play account of the event of self-deceit. A four-step diagram of that account is provided in an article by Erik Matson, Colin Doran, and myself (ungated version of the article):

First, the conscious, walking, talking Jim tells his impartial friend Rick his rationalizations for his actions. Second, Rick responds and with good counsel, perhaps even disapproval of what Jim has done or is about to do. Third, Jim confers with his Man within his Breast. Fourth: “The violence and injustice of our own selfish passions are sometimes sufficient to induce the man within the breast to make a report very different from what the real circumstances of the case are capable of authorizing.”

“This self-deceit, this fatal weakness of mankind,” Smith writes, “is the source of half the disorders of human life. If we saw ourselves in the light in which others see us, or in which they would see us if they knew all, a reformation would generally be unavoidable. We could not otherwise endure the sight” (158-159.1).

The only solution to the problem of self-deceit is candid reflection upon the general rules of proper conduct and a courageous facing up to how one’s conduct and beliefs stand in relation to those rules. Frank and open discourse with friends is an aid to such self-correction. “Frankness and openness conciliate confidence,” Smith writes (337.28). Smith urged us to scruple over the general rules, and he called allegiance to general rules the sense of duty.

Politics and government are breeding grounds of self-deceit. Smith wrote:

A true party-man hates and despises candour; and, in reality, there is no vice which could so effectually disqualify him for the trade of a party-man as that single virtue. The real, revered, and impartial spectator, therefore, is upon no occasion at a greater distance than amidst the violence and rage of contending parties… Of all the corrupters of moral sentiments, therefore, faction and fanaticism have always been by far the greatest. (155-156.43)

It’s no wonder that Smith put little faith in government as agent of beneficial intervention. His political philosophy was rather different. The chief concern, he wrote, should be guarding against trouble: “The fatal effects of bad government arise from nothing, but that it does not sufficiently guard against the mischiefs which human wickedness gives occasion to” (187.1).

The main merit of Smith’s political philosophy, wrote Friedrich Hayek, “is that it is a system under which bad men can do least harm.” Bad men sustain delusions to deny their self-deceptions. Smithian liberalism limits the evils that delusional men can wreak, and it tends to contest and correct their delusions in the first instance. That’s why the delusional muzzle and repress their critics and usurp institutions: Their delusions would be unsustainable on impartial platforms and in open dialogue. Smithian liberalism is a prophylaxis against the evils of self-deceit.

This article, Adam Smith on Self-Deceit, was originally published by the American Institute for Economic Research and appears here with permission. Please support their efforts.