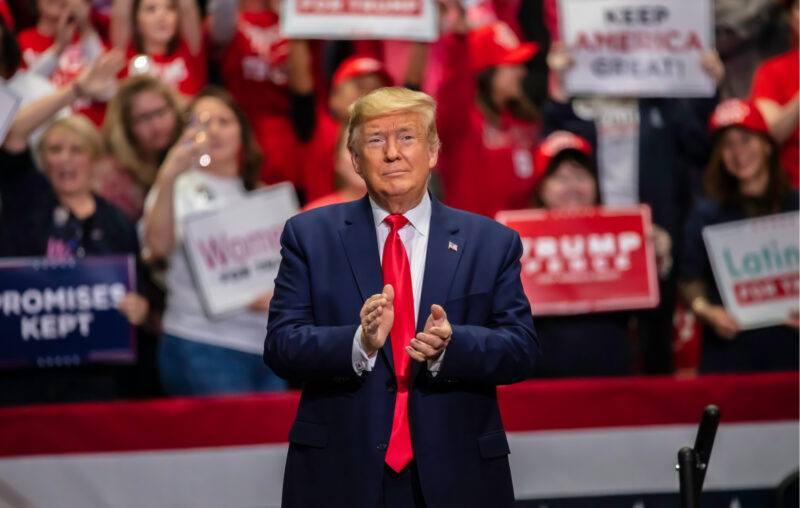 On July 7th, 2021 former president Donald Trump filed class action lawsuits against Twitter, Facebook, and Alphabet, the parent company of Google and YouTube. Twitter, Facebook, and YouTube have all banned the former commander-in-chief from their platforms in response to the January 6th Capitol Hill riots, to which they hold he played a key role in inciting. They maintain a lifetime ban, a two-year ban, and an until further notice restriction respectively. Trump’s legal team alleges that they have engaged in partisan censorship against him and the other plaintiffs. The accusation is in line with the common narrative that Big Tech companies systematically suppress Conservative ideas and figures.

This lawsuit also follows in the footsteps of the ongoing controversy regarding Section 230 of the Communications Decency Act and the protection from civil liability it provides to interactive computer services, allowing them to moderate content as they please. Trump’s class action alleges that Section 230 is unconstitutional and that these companies violated the First Amendment by colluding with the state. Although similar arguments have been made in the past to no success, it remains to be seen how this particular case will prevail.

The lawsuits were filed in a federal court in Southern Florida and are being presided over by three different judges, which may provide an increased chance of success. This article, for the sake of simplicity, will look at the class action filed against Twitter and its CEO Jack Dorsey.

The filing itself has four listed plaintiffs, Donald Trump, Linda Cuadros, the American Conservative Union, and a putative class, likely referring to conservative Twitter users. Linda Cuadros is a woman residing in Florida who formerly maintained a Twitter account with over 10,000 followers. Her account was permanently banned after making a post about vaccines. She also maintains that Twitter has a history of applying their enforcement mechanism in a biased manner against her as well as selectively failing to protect her from doxxing. The American Conservative Union is an influential grassroots organization that alleges that Twitter systematically removed many of its followers.

The plaintiffs make two basic charges. The first being that Twitter’s actions are a violation of the First Amendment, which protects free speech from government infringement. The second is that Section 230, the law that protects Twitter and other internet companies from civil suits, is unconstitutional.

At first glance, this may seem ludicrous as the First Amendment protects the free speech of private actors from the government. It is precisely why a private company like Twitter would have the right to discriminate against viewpoints in the first place. However, the Trump legal team invokes an important nuance which can be summarized as, big if true.

Their argument is that Twitter and the other tech companies are essentially state actors, which would mean they are bound by the First Amendment. A private corporation can be classified as a state actor if it has been working with the government, either from collusion or coercion, to accomplish the state’s agenda. Such an exception is important because it stops the government from simply using private businesses to accomplish otherwise unconstitutional goals. Vivek Ramaswamy summarizes this concept in the Wall Street Journal,

“The Supreme Court held in Norwood v. Harrison (1973) that the government “may not induce, encourage, or promote private persons to accomplish what it is constitutionally forbidden to accomplish.”

The Trump legal team alleges that Twitter and the other companies have been sufficiently incentivized by the government either through threats of regulations or perhaps by mutual benefits to cross this threshold.

“(B)y repeatedly requiring their appearance at hearings, and reinforcing their potential to impose regulations, and strip them of 230 immunity, Democrat legislators were intended to force Defendants into permanently banning Plaintiff’s access to his Twitter account.”

It also points out,

“Dorsey and Twitter acted to censor other medical opinions that did not uphold that narrative of Dr. Fauci and the CDC, which took on both a political and medical nature, given the interconnection between government policy and pending and science.”

They also allege that Twitter’s suppression of content that counteracts the prevailing narrative regarding Covid-19 amounts to political bias in bad faith. If so, that may violate the text of Section 230 which only permits

“(A)ny action voluntarily taken in good faith to restrict access to or availability of material that the provider or user considers to be obscene, lewd, lascivious, filthy, excessively violent, harassing, or otherwise objectionable, whether or not such material is constitutionally protected.”

Of course, what constitutes “bad faith” and “otherwise objectionable content” is perilously vague. Does that prohibit any content moderation that doesn’t have to do with explicit violence or sexual content or does that simply refer to the preferences of the moderators?

Law Professor and civil liberties expert David Greene argues that Section 230 was meant to give near-absolute discretion to the administrators of interactive internet services with no distinction between publishers and platforms. This was because lawmakers wanted to keep the internet as free and open as possible to encourage competition amongst diverse entities.

At the same time, the legal giant, Richard Epstein, posits that the text of Section 230 seems to suggest that it only applies to violence and sexual content. The phrase “good faith” doesn’t seem like it was supposed to give a blank check to moderators to be as arbitrary and biased as they wish. Furthermore, “otherwise objectionable content” may only be referring to things in the vein of violent or sexual content, as that seems to be what the rest of the law is trying to prevent.

All this, of course, sets the table for a much-needed debate between the necessity of the freedom for online services to exercise discretion and the limits of their state-granted civil protections from lawsuits.

Of course, as it pertains to Trump’s lawsuits, the devil is in the details and discovery. If his legal team can get ahold of incriminating information that suggests Twitter was colluding or being coerced by the government, he may have a case. At the moment, there has never been a successful lawsuit for similar disputes.

The Trump team also puts forth a rather bizarre charge that Section 230 is unconstitutional, which rides off their more sound First Amendment argument. Samantha Lai from the Brookings Institution explains,

“The lawsuits claim that this statute was deliberately enacted by Congress to pressure social media into removing objectionable speech, as Congress did not have the power to do so themselves. The statute would, allegedly, therefore count as an “unconstitutional delegation of authority” to censor Trump and other conservatives.”

Trump’s filing alleges that Congress crafted Section 230 with the intention of giving immunity to social media companies so that they could then use them to stifle online speech which, if true, would not only be a violation of the First Amendment but the nondelegation doctrine. This argument is likely more symbolic than it is serious. Although the nuances surrounding Section 230 are certainly in need of development, the law has been around since 1996 with little credible challenge on this front. Furthermore, it is highly unlikely that Congress, in 1996, would have anticipated the potential to police speech through the power of social media companies that did not exist or anticipated the importance they would play today.

A basic reading of the text of the law and the history surrounding its creation should lead any observer to understand that Congress created Section 230 to promote a vibrant and competitive internet. Judging by how important and lucrative the internet has become, they have clearly succeeded. This is not to say that perhaps we are seeing problems when it comes to the power certain companies may have over public discourse or that reforms aren’t necessary. However, to say that Section 230 is unconstitutional on its face is a far stretch and likely more of a middle finger to Big Tech rather than a serious legal argument.

Trump’s lawsuit against Twitter, Facebook, and YouTube reflects a larger backlash against Big Tech, some of it justified, some not so much. His legal filing against Twitter makes some claims that are worth investigating and some that seem more like publicity stunts. It also raises some important discussion points about the protections Section 230 provides to interactive computer services. The lawsuit ultimately hinges on whether or not his team can find sufficient evidence that these social media giants were/are colluding with the state to suppress free speech. If so, that would be an issue that everyone from all political persuasions should be concerned about and hope to defeat.

This article, A Closer Look at Trump’s Lawsuit Against Twitter, was originally published by the American Institute for Economic Research and appears here with permission. Please support their efforts.