7 Signs That War With Russia Just Got Even Closer 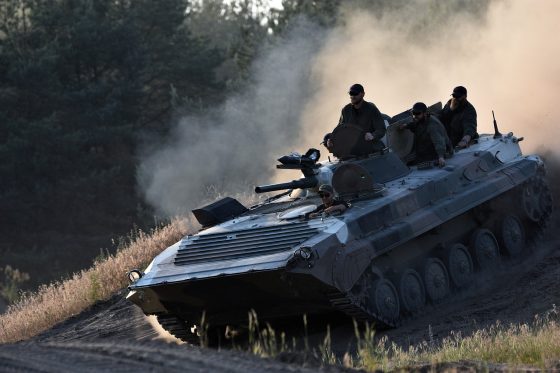 In this article I am going to write about something that the vast majority of the U.S. population couldn’t care less about.  Sadly, most Americans simply do not care about Ukraine, Russia’s military preparations for war, or pretty much anything else that is happening on the other side of the globe.  But over in Russia, things are completely different.  There is constant talk about the potential for war with the west, and there is a lot of pessimism that it will be able to be avoided.

The only way that Vladimir Putin will ever authorize an invasion of Ukraine is if one of his strategic “red lines” is crossed.

But instead of easing tensions and trying to talk things out, western leaders just keep provoking Russia.

If they keep on recklessly poking the bear, at some point a mistake will be made and we will have a war that nobody wants.  The following are 7 signs that war with Russia just got even closer…

#1 Despite the fact that Vladimir Putin has said that such a move would cross one of his “red lines”, Ukraine was just told that it will eventually be allowed to join NATO…

Facing a building threat from Russia, Ukraine’s president sought security guarantees from NATO’s chief in a meeting on Thursday and came away with a renewed commitment that his country could eventually join the military alliance despite stiff objections from its Russian neighbors.

Ukraine has opened bomb shelters in the capital of the nation as fears of a Russian invasion soar. On Wednesday a Ukrainian minister and former top spy warned the conflict could spread globally.

#3 ABC’s Martha Raddatz is reporting that after Joe Biden’s recent call with Vladimir Putin, the Russians moved an additional 10,000 troops to the border with Ukraine.

“At this point in time, Russia is choosing an aggressive posture vis-à-vis its neighbors. And as the European Union and its G-7 partners have made very clear, further aggressive acts against Ukraine will have massive costs for Russia,” European Commission President Ursula von der Leyen said Wednesday.

Belarusian banks are preparing for tougher Western sanctions by signing up to Russia’s alternative to the SWIFT, the international financial messaging network that underpins the global banking system, Russia’s Moskovsky Komsomolets tabloid has reported.

Russia’s System for Transfer of Financial Messages (SPFS) has more than 400 domestic users — practically every licensed Russian lender — but is used by only 38 banks from nine other countries. Developed in 2014, SPFS is designed to keep banking transactions in the event of Western sanctions disconnecting Russia from SWIFT.

#6 It is being reported that Russia “has begun to move Tor short-range surface-to-air missile systems to the border area with Ukraine.”

#7 A bipartisan group of U.S. Senators wants to formally designate Russia as a “terrorist state”.  Needless to say, the Russians are not happy about this…

On top of that – as if all that were not incendiary enough – the US Senators want to designate Russia a “terrorist state” if its “forces further invade Ukraine”. Such a designation of a nuclear superpower is unprecedented. It is an insane move that would make diplomacy and negotiation all but impossible. It’s tantamount to declaring war.

We should want to try to find a way to have peace with Russia, but we just keep on moving closer to war.

And when war eventually comes, it may be global.

Most Americans don’t realize this, but Russia and China just announced a brand new “security alliance”…

On Wednesday it was announced that Russia and China had agreed to terms on a security alliance.

President Xi said regarding the deal: “At present, certain international forces under the guise of ‘democracy’ and ‘human rights’ are interfering in the internal affairs of China and Russia and brutally trampling on international law and recognised norms of international relations.”

So could the U.S. find itself fighting both Russia and China at the same time someday?

Yes, that is entirely possible.

Meanwhile, European powers are warning that talks to revive the Iranian nuclear deal “are rapidly reaching the end of the road”…

A joint statement from Britain, France and Germany issued on Tuesday said “we are rapidly reaching the end of the road” to save the 2015 Iran nuclear deal after the Iranian side accused the West of stoking a “blame game” atmosphere.

“Iran’s continued nuclear escalation means that we are rapidly reaching the end of the road,” France’s ambassador to the United Nations, Nicolas de Riviere, announced. He added that Iran’s consistently blowing past development and uranium enrichment limits all while blaming the US for pulling out of the deal means “We are nearing the point where Iran’s escalation of its nuclear program will have completely hollowed out the JCPOA.”

The Israelis have already been practicing for an attack on Iran, and if peace talks collapse it will make a conflict between Israel and Iran inevitable.

Of course a new war in the Middle East would give the Biden administration a way to distract us from our growing internal troubles.  At this point, only 26 percent of Americans believe that the country is headed in the right direction…

A new Economist/YouGov Poll shows almost 75% of Americans are either unsure or believe the country is headed in the wrong direction. Only 26% think things are going well.

Personally, I do not believe that we will see a major war erupt before the end of 2021.

But a new year is just weeks away, and I have such a bad feeling about 2022.

Over the past couple of years we have been hit with one thing after another, and “the perfect storm” that is now upon us threatens to go to an entirely new level next year.